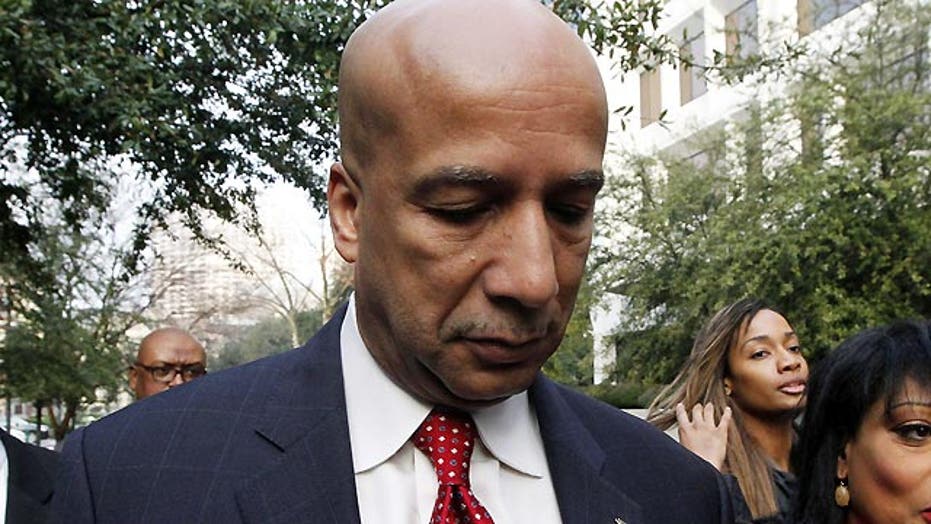 Ray Nagin convicted of accepting bribes, free trips and other gratuities from contractors

The 57-year-old Democrat, who led his city through the aftermath of the 2005 storm, was found guilty of charges that he accepted bribes, free trips and other gratuities from contractors in exchange for helping them secure millions of dollars in city work while he was in office.

He will remain free on bond while he awaits sentencing. Each of the charges carries a sentence from three to 20 years, but how long he would serve was unclear and will depend on a pre-sentence investigation and various sentencing guidelines. No sentencing date was set.

Nagin sat quietly at the defense table after the verdict was read and his wife, Seletha, was being consoled in the front row. Before the verdict, he said outside the New Orleans courtroom: "I've been at peace with this for a long time. I'm good."

Nagin, who left office in 2010 after eight years, was indicted in January 2013 on charges he accepted hundreds of thousands of dollars in bribes and truckloads of free granite for his family business in exchange for promoting the interests of local businessman Frank Fradella.

He also was charged with accepting thousands of dollars in in payoffs from another businessman, Rodney Williams, for his help in securing city contracts.

Nagin is best remembered for his impassioned pleas for help after levees broke during Hurricane Katrina, flooding much of New Orleans and plunging the city into chaos.

Nagin testified that key witnesses lied and prosecutors misinterpreted evidence including emails, checks and pages from his appointment calendar linking him to businessmen who said they bribed him.

The defense repeatedly said prosecutors overstated Nagin's authority to approve contracts. His lawyer said there is no proof money and material given to the granite business owned by Nagin and his sons was tied to city business.

The charges against Nagin included one overarching conspiracy count along with six counts of bribery, nine counts of wire fraud, one count of money laundering conspiracy and four counts of filing false tax returns. He was acquitted of one of the bribery counts.

Each charges carries a sentence from 3 to 20 years, but how long he would serve was unclear and will depend on a pre-sentence investigation and various sentencing guidelines. No sentencing date was set.

Prosecutors say he took hundreds of thousands of dollars' worth of bribes including money, free travel and granite for Stone Age LLC, a family granite business.

They allege the corruption spanned the time before and after Hurricane Katrina struck in August 2005.

The charges resulted from a City Hall corruption investigation that had resulted in several convictions or guilty pleas by former Nagin associates by the time trial started on Jan. 27.

Fradella and Williams, both awaiting sentencing for their roles in separate bribery schemes alleged in the case, each testified that they bribed Nagin.

Nagin's former technology chief, Greg Meffert, who also is awaiting sentencing after a plea deal, told jurors he helped another businessman, Mark St. Pierre, bribe Nagin with lavish vacation trips. St. Pierre did not testify. He was convicted in the case in 2011.

Nagin said he did not to know his vacation trips to Jamaica and Hawaii were paid for by St. Pierre. He also said he wasn't told that a family trip to New York was paid for by a movie theater owner who, prosecutors said, received help with a city tax issue after Katrina wiped out the theater.