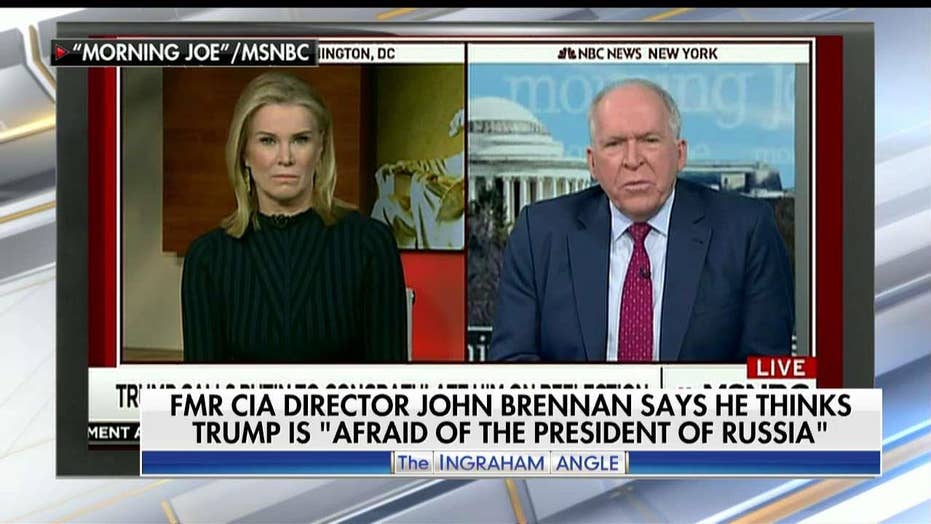 Former CIA director John Brennan raised eyebrows this week when he went on national television and suggested the Russians “may have something” on President Trump.

Brennan, who led the CIA during the Obama administration, later conceded to The New York Times that he actually had no knowledge to back the claim.

To critics, this was yet another example of increasingly hostile and partisan behavior toward Trump from the former leader of an agency that considers itself above partisanship.

“For John Brennan, the most recent former CIA director, to come forward and insinuate -- on national TV -- that a sitting president is the subject of blackmail by a foreign adversary is outrageous,” Buck Sexton, a former CIA officer, said in an interview.

“There used to be a day when intelligence officials, whether they were in office or out of office, would not spew innuendo like that, especially such grave charges,” Wall Street Journal writer Kim Strassel said on Fox News’ “Ingraham Angle.”

Brennan, who is now an analyst for NBC News and MSNBC, has not shied away from expressing his extreme distaste for Trump. But critics argue he is going farther than others who have led the spy agency.

Our former intelligence chiefs have a responsibility to maintain the nonpartisan, mission first reputation of the intelligence community.

“When the full extent of your venality, moral turpitude, and political corruption becomes known, you will take your rightful place as a disgraced demagogue in the dustbin of history,” Brennan recently tweeted.

Mollie Hemingway, a staff writer at The Federalist, said Brennan’s comments destroy the media narrative that intelligence chiefs are “a bunch of apolitical boy scouts.”

Sexton, host of a syndicated radio program “Buck Sexton with America Now,” suggested Brennan’s comments are hurting the reputation of the agency.

“Our former intelligence chiefs have a responsibility to maintain the nonpartisan, mission-first reputation of the intelligence community,” he said.

Other experts say Brennan’s intense partisanship is unusual for someone in his position, even if other former top administration officials have been outspoken about their beliefs after leaving office.

I think he is afraid of the Russian president. They may have something on him personally... the fact that he has had this fawning attitude toward Mr. Putin... I think continues to say to me that he does have something to fear.

“Partisan criticism is not uncommon, but it is usually diplomatic,” said Cal Jillson, political science professor at Southern Methodist University in Dallas, Texas. “Think of James Baker or Leon Panetta, people who speak softly because they are used to being listened to.”

Jillson said that current and former intelligence officials who have been privy to secret information should adhere to a higher code of conduct because their remarks “carry more weight.”

“With politicians, we take what they say as raw speculation,” Jillson said. “But for someone like John Brennan, who has known the country’s deepest secrets for decades, the public takes it as an allusion made with the knowledge of the nation’s secrets, which he has a responsibility not to reveal.”

Brennan is facing criticism from the left, too.

“Declarations like these may be important to make and gratifying to read, but they really shouldn’t be coming from those whose integrity depends on them remaining outside the political fray, even in these insane times,” the paper said.