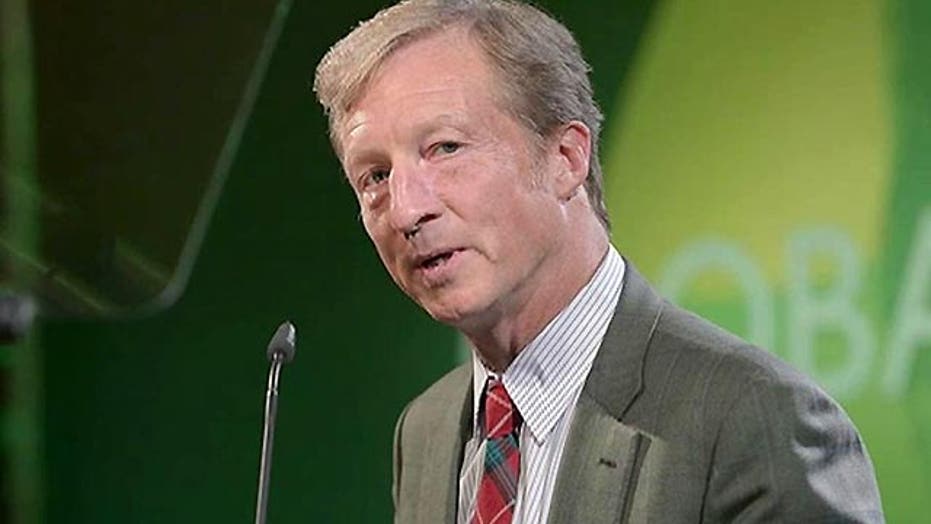 Is Tom Steyer the Dem's equivalent to the Koch brothers?

Steyer has pledged $100 million this year to elect Democrats who are committed to fighting global warming and the Keystone XL pipeline.

He was in Washington Wednesday for private meetings at the White House and to promote his "Risky Business" project, which attempts to get American business to adapt to climate change.

In a previous meeting Tuesday  in New York, Steyer told reporters, "We need to reward people whose behavior reduces climate risk and penalize people who add to it."

By that measure, Steyer himself might well be due for punishment. Critics say Steyer made his fortune, in part, from fossil fuels - the very energy source he now condemns - while he was a hedge fund manager at Farallon Capital Management, a firm he founded.

"This is somebody who really made his fortune largely investing in fossil fuels who now wants to close off the ability to use fossil fuels to a lot of other people who aren't as wealthy," said Phil Kerpen, president of the conservative political action committee American Commitment.

Earlier this  month, The Washington Post reported, "Steyer said in 2012 that he was halting his 'ecologically unsound' investments, a review of his ties to the $20 billion hedge fund he led for two decades shows that he is only now becoming fully divested from energy firms linked to climate change."

Kerpen has produced online ads that attack Steyer and the Democratic candidates he is supporting in the upcoming  midterm elections. One ad commences with a narrator's voice saying, "Senate Democratic Leader Harry Reid is on the attack..." It then cuts to a sound bite of Reid on the Senate floor saying, "What is un-American is when shadowy billionaires pour unlimited money into our democracy to rig the system..."

It is a not so subtle jab at Reid's repeated references to the Koch Brothers - the Kansas libertarian billionaires who contribute mightily to conservative causes and candidates and who are regularly demonized by Reid and other Democrats.

Asked at Tuesday's press briefing whether he had any misgivings about Steyer's visit to the White House, given the prohibition against political activities there, White House Press Secretary Josh Earnest said, "I have no misgivings about the individuals who are participating in that meeting. Their political activities notwithstanding, the administration is committed to making progress in addressing the causes of climate change and reducing carbon pollution."

In April of 2013, President Obama, and Congressional Democratic leaders Nancy Pelosi and Reid attended a fundraiser at Steyer's Bay area mansion. Kerpen said that shortly after that fundraiser, the entire Democratic party's messaging began to change.

"I think that's where the hardball really started," he said. "Because we saw a couple weeks after that the Democrats took to the Senate floor and spoke all night about climate change and Tom Steyer applauded them for that."

Some Democrats, especially those in tough re-election battles in  energy rich states, are said to be fuming over the Steyer White House visit. One of them told the Washington Examiner, "If a Republican president did the same thing with the Koch brothers, we would skewer them."