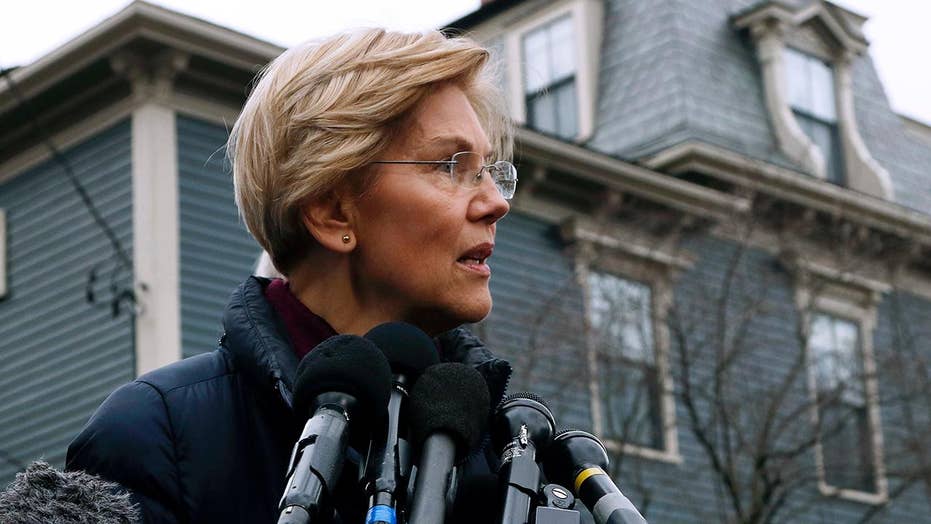 U.S. Sen. Elizabeth Warren has her eyes set on the 2020 presidential race, but the controversy surrounding her claims of Native American ancestry may have cost her political future, RealClearPolitics associate editor A.B. Stoddard argued Monday night on the "Special Report" All-Star panel.

On Monday morning, Warren announced she was forming an exploratory committee in preparation of what will likely be a presidential run in 2020. The Massachusetts Democrat is the third member of her party to declare such ambitions -- following former Housing and Urban Development Secretary Julián Castro and U.S. Rep. John Delaney of Maryland.

In October, Warren released the findings of a DNA test that show that she may be 1/1,024th Native American, in a bid to quiet her critics. She had been accused of claiming she had Native American heritage to advance her career, something President Trump has repeatedly suggested.

Stoddard, who appeared with the Federalist senior editor Mollie Hemingway and Washington Examiner editorial director Hugo Gurdon, expressed that Warren’s deflection from the ancestry controversy isn’t good enough since it was “truly a debacle.”

“It showed what her political judgment is really like. And it’s one thing to just be on the Senate floor or the campaign trail in 2016, have a national network of support, have a good message. It’s another to make a huge blunder, sort of taking Trump’s bait ... but yeah, she has a bad story on this issue,” Stoddard told the panel. “She brings the video out in late October, two weeks before the midterms, steps on the Democrats’ message. It’s completely selfish and sort of self-absorbed and tone-deaf, and then she gets dissed by the Cherokee Nation. It was a disaster and Democrats were furious. And they believe that it was a fatal blow.”

“She brings the video out in late October, two weeks before the midterms, steps on the Democrats’ message. ... It was a disaster and Democrats were furious. And they believe that it was a fatal blow.”

“Instead of sort of just stepping aside and using what she has, which is some national support and kind of being a kingmaker, she’s gonna step into this race and it’s gonna be the end of her,” Stoddard continued. “It’s a wide-open race and I expect that this primary run to really go into late spring of 2020, so a year-and-a-half of a Democratic Party freak-out. They are very divided, but Elizabeth Warren, even after 2016 I’m going to deposit is not going to be the nominee. Look at the polling, no one is excited about her.”

Hemingway agreed with Stoddard, calling Warren’s rollout of her DNA results was “horrifically done.” She also drew attention to Warren’s “vibe,” which she described as a “hectoring middle school principal” and suggested that her policies would be “more challenging” for the senator since a general election candidate tends to be more moderate.

Meanwhile, Gurdon asserted that President Trump wasn’t going to “get his wish” in running against Warren in 2020 since many already see her as “yesterday’s woman.”

“The fact is that the party has already moved to adopt most of her positions. She doesn’t stand out and there are younger guns in the field,” Gurdon said. “Her announcement today was pretty drab, it was very formulaic. She, you know, emphasized her roots in Oklahoma and her links to the military and the middle class. And it was just ho-hum kind of -- I just think that she’s already yesterday’s woman. There will be somebody else who gets the nomination.”