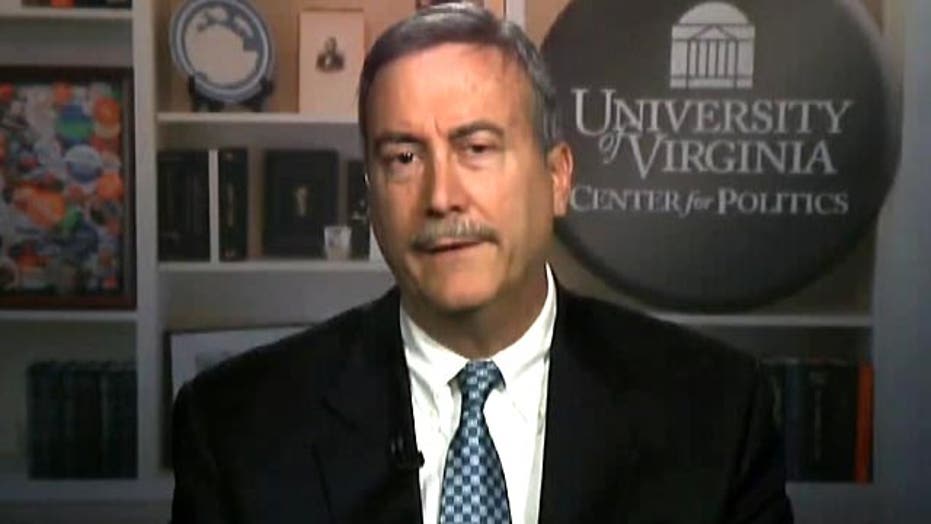 Should midterm polls be investigated for potential bias?

WASHINGTON – Tuesday's midterm elections were supposed to be a night of nail-biters, from Sen. Mitch McConnell's re-election race in Kentucky to veteran Sen. Pat Roberts' battle in Kansas. The too-close-to-call refrain was expected to be heard throughout the night.

Instead, when the dust settled, Republicans rumbled to one of their biggest victories in decades.

How could so many polls get so many races so wrong?

"I want an investigation of the polls in Virginia," University of Virginia political scientist Larry Sabato told Fox News. "They were completely wrong, just as they were in Georgia. They were also way off in Illinois. And I could go on and on."

Virginia played host to one of the biggest surprises of the night, for anyone who had been basing their election predictions on the polls. In the same state where pollsters failed to predict then-House Majority Leader Eric Cantor's loss to economics professor Dave Brat in the primaries, they also misjudged the race between incumbent Democratic Sen. Mark Warner and Republican Ed Gillespie.

Many polls had Warner with a double-digit lead over Gillespie. Warner is currently clinging to a 1-point lead, with the ballot count ongoing.

It's not just that candidates thought to be dark horses ended up winning, or coming close. A flood of polls also showed several races to be tight in the closing weeks -- but on election night, Republicans soundly defeated Democrats in those contests. Exhibit A is the race between Senate GOP Leader Mitch McConnell and Democrat Alison Lundergan Grimes in Kentucky. Polls showed Grimes within single digits -- one even showed her within a point -- of McConnell. The powerful senator ended up winning by 15 points.

The results have led to some self-reflection, as well as recriminations, over the state and accuracy of political polling.

Sabato, who said the polling industry "needs some housecleaning," clarified to FoxNews.com on Thursday that he wants the polling business -- not the government -- to conduct an internal review of its practices and procedures.

"The government is the last group you'd want conducting any inquiry. Not only would it become partisan, inevitably, but the best polling professionals are well capable of organizing this themselves," he told FoxNews.com in an email.

In Kansas, number-crunchers at FiveThirtyEight had forecast a big loss for Gov. Sam Brownback, but he won by a 4-point margin. Data from FiveThirtyEight also predicted Roberts would be defeated in Kansas -- and many polls showed him virtually tied -- but he won by more than 10 percentage points against independent candidate Greg Orman. Likewise, in Georgia, Republican David Perdue beat Michelle Nunn for an open Senate seat by 8 points, despite polls showing a much closer race.

Sabato, who heads up the Center for Politics' Crystal Ball website, had his own share of misses Tuesday night. Sabato had nine races leaning Democrat. Of those, seven were won by Republicans including the gubernatorial races in Maryland, Maine and Illinois. Maryland was a huge upset, as most polls showed Democrat Anthony Brown well ahead, yet Republican Larry Hogan won comfortably.

Sabato believes that in many cases, pollsters failed to factor in how heavily Republican and conservative the electorate in a low-turnout midterm was going to be.

"After the experience of 2012, when they undercounted Hispanics and young people, they were concerned about the same phenomenon happening again," he said. "Perhaps they over-compensated. I want them to tell us."

Rasmussen Reports defended its polling data on its website, saying in a written statement that they got it right "most of the time."

"It's interesting to note that in the races in which the spread was really off for us (and the Real Clear Politics average of all pollsters), most of the time we were spot-on for the Democratic number but wrong on the Republican number," the message stated.

Rasmussen pointed to a number of unknowns. "If you add the percentage of voters 'not sure' to the GOP side, you will come very close to the final Republican number," the statement said.

Rasmussen believes that the data "suggests the last-minute swing vote went to the Republicans, and while it did not necessarily change the game in terms of the winner, it very much changed the spread between the candidates."

This is not the first time some off-base polling has prompted a review of the methods used by polling firms. After Gallup showed Mitt Romney ahead in the 2012 presidential race -- he lost -- the Gallup Poll reviewed its own methodology of selecting voters.

"It's becoming a much more difficult, nerve-wracking business," Geoff Garin, the president of Hart Research Associates and a leading Democratic pollster, told Bloomberg News at the time.