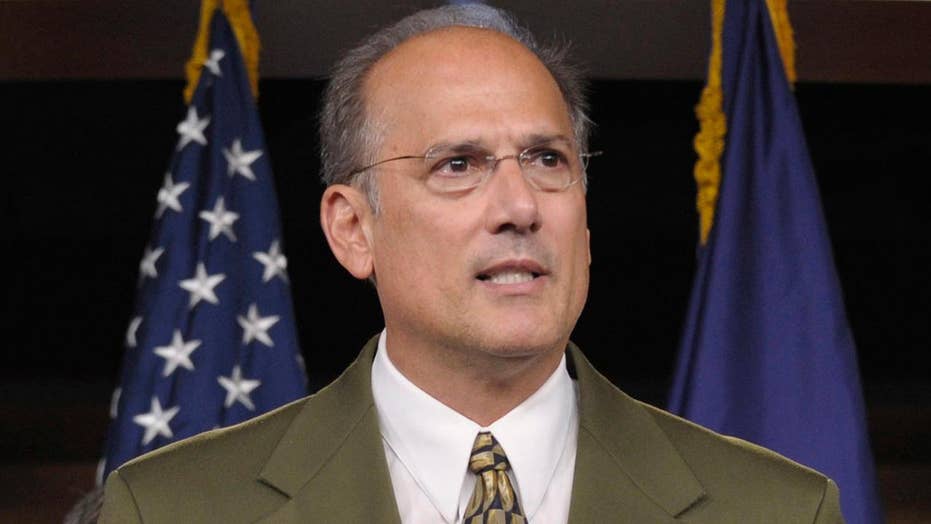 Trump tweeted Tuesday, “Rep. Tom Marino has informed me that he is withdrawing his name from consideration as drug czar. Tom is a fine man and a great Congressman!”

Democrats and at least one Republican had pressed the president on Monday to pull Marino’s nomination following a weekend Washington Post/”60 Minutes” report on the drug legislation.

Amid the firestorm, Trump had seemed to leave Marino dangling during his Monday press conference alongside Senate Majority Leader Mitch McConnell, R-Ky., at the White House.

“He was a very early supporter of mine. … He's a great guy,” Trump said of Marino, before adding, “We're going to look into the report. We're going to take it very seriously. … We're going to be looking into Tom.”

At the same time, Trump said he would declare a national emergency next week on the opioid epidemic that has spread across the United States.

In a Tuesday morning interview on Fox News Radio with host Brian Kilmeade, the president called Marino a “fine man,” and explained his decision to withdraw from consideration for czar.

“He was very gracious,” Trump said. “He didn’t want to even have the perception of a conflict of interest with drug companies or insurance companies.”

Senate Minority Leader Chuck Schumer, D-N.Y., said nominating the Pennsylvania Republican for drug czar is “like putting the wolf in charge of the henhouse.”

Schumer said Americans deserved an advocate who is “totally committed to fighting the opioid crisis, not someone who’s labored on behalf of the drug industry.”

The Post reported Sunday that Marino and other members of Congress, along with the nation's major drug distributors, prevailed upon the DEA and the Justice Department to agree to an industry-friendly law that undermined efforts to restrict the flow of pain pills that have led to tens of thousands of deaths. President Barack Obama signed the law in April 2016.

The industry worked behind the scenes with lobbyists and key members of Congress, including Marino, pouring more than a million dollars into their election campaigns, the newspaper reported.

“I’m proud of my work on the Ensuring Patient Access and Effective Drug Enforcement Act of 2016, which passed with unanimous consent in the House and Senate, unopposed by the DEA and was signed into law by President Obama. This landmark legislation will help to facilitate a balanced solution for ensuring those who genuinely needed access to certain medications were able to do so, while also empowering the Drug Enforcement Agency (DEA) to enforce the law and prevent the sale and abuse of prescription drugs,” Marino responded late Tuesday.

Sen. Orrin Hatch, R-Utah, the bill's lead Senate sponsor, defended the measure Monday, calling allegations that he or Marino "conspired" with drug companies "utterly ridiculous." Hatch, a 40-year veteran of the Senate, said he was "no patsy" of the drug industry.

The language affecting DEA enforcement authority was suggested by DEA and the Justice Department, Hatch said, adding that the agencies could have tried to stop the bill at any time -- or recommended that Obama veto the measure.

"Let's not pretend that DEA, both houses of Congress and the Obama White House all somehow wilted under Representative Marino's nefarious influences," Hatch said.

West Virginia Democrat Sen. Joe Manchin, whose state has been among the hardest hit by the opioid crisis that has killed tens of thousands of Americans and has seen millions more addicted to deadly painkillers, demanded Trump withdraw Marino’s nomination.

Manchin, who has his own ties to big pharma, said the legislation Marino helped pass through Congress had effectively defanged the DEA’s ability to do its job.

Before the announcement that Marino was stepping aside, Manchin had gone on CNN’s “New Day” and said Marino would become the Trump administration’s drug czar “over my dead body” and said “adjustments will be made.”

Following the announcement, Manchin called Marino’s move to withdraw the “right decision,” but added that “the fact that he was nominated in the first place is further evidence that when it comes to the opioid crisis, the Trump administration talks the talk, but refuses to walk the walk.”

“The opioid crisis demands that the next drug czar is solely focused on getting communities across the country the help they desperately need. I hope the Trump administration nominates someone that fits the bill.”

Sen. Claire McCaskill, D-Mo., said she will introduce legislation to repeal the 2016 law. She also called Tuesday's announcement "the right decision" and said she looks "forward to the administration nominating a leader that can aggressively bring to bear every tool the government has to confront what is unquestionably a national public health crisis."

His nomination had been pending before the Senate Judiciary Committee, but no actual date had been set for his confirmation hearing. Trump nominated Marino last month.