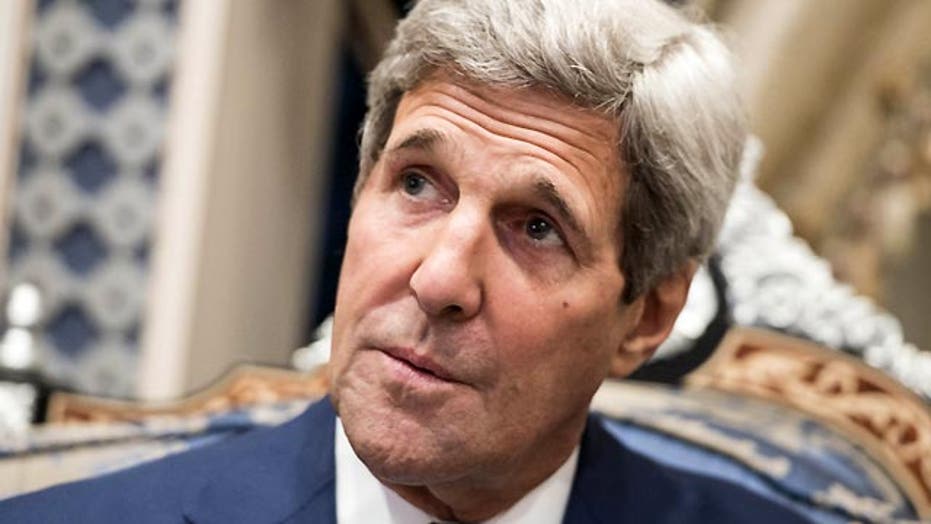 U.S. at war with ISIS? Not according to Secretary Kerry!

The Obama administration is refusing to describe the expanded military campaign against the Islamic State as a war -- despite plans to launch airstrikes across two tumultuous Middle East countries, dispatch hundreds more U.S. military personnel and build a coalition of nations to ultimately “destroy” the growing terror network.

The reluctance to use that label has generated confusion on Capitol Hill, particularly in light of new intelligence estimates that the Islamic State has as many as 31,500 fighters across Iraq and Syria. That’s the size of a small army – and close to the estimated size of the Taliban force in 2001.

Yet in television interviews on Thursday, Secretary of State John Kerry repeatedly avoided the term “war” to describe the mission, instead calling it a “major counterterrorism operation” that could last a long time.

“It’s hard to find a response to that,” Sen. John McCain, R-Ariz., told Fox News, when asked about Kerry’s comments. “Then what was the president talking about [Wednesday] night?”

McCain and other lawmaker suggest Kerry’s comments do not square with President Obama’s stated goal of defeating the Islamic State, or ISIS.

Other members of the administration besides Kerry appeared to be struggling to both define the conflict and the terms of victory, as the U.S. enters a new and potentially risky phase of its operation against the terror group.

Earnest tried to explain the operation as falling under the umbrella of the 2001 authorization to use military force – the measure that provided the legal basis to go into Afghanistan after the 9/11 attacks. (Kerry also compared the operation to strikes against terrorists in Afghanistan and Pakistan and Yemen.)

The administration is using this argument in order to avoid seeking new congressional authorization for the fight against ISIS.

But the Islamic State was not originally linked to the Sept. 11 attacks and has since split from the perpetrator of those attacks, Al Qaeda.

Some lawmakers say the administration is on shaky legal ground by treating this as a mere continuation of the counterterrorism missions in other countries, and is effectively downplaying the entire challenge ahead.

McCain said that if the president doesn’t understand the difference between the Islamic State and terror networks in places like Yemen, “then … he is oblivious to the size, shape, strength and ability of ISIS. It’s like comparing a little league team to the New York Yankees.”

A CIA spokesperson confirmed to Fox News on Thursday that the ISIS fighting force has sharply increased from the original estimate of at least 10,000 fighters.

“CIA assesses the Islamic State of Iraq and the Levant (ISIL) can muster between 20,000 and 31,500 fighters across Iraq and Syria, based on a new review of all-source intelligence reports from May to August,” the spokesperson said. “This new total reflects an increase in members because of stronger recruitment since June following battlefield successes and the declaration of a caliphate, greater battlefield activity, and additional intelligence.”

Asked Thursday whether the government still views these operations as part of the “war on terrorism,” State Department spokeswoman Marie Harf said: “It’s certainly not how I would refer to our efforts.”

House Homeland Security Committee Chairman Michael McCaul, R-Texas, said the semantics over what to call the operation “weakens the mission.”

McCaul praised the president for moving to expand the mission into Syria, where the “head of the snake” of ISIS is located. But he said the administration is being careful with its language because the terror group defies Obama’s “campaign narrative” about ending the war on terrorism and putting Al Qaeda on the run.