On 'Hannity,' the president's son details his meeting with a Russian lawyer

Donald Trump Jr. acknowledged in an exclusive interview with Fox News' "Hannity" Tuesday night that he "probably would have done things a little differently" when he met with a Russian attorney during his father’s presidential campaign in June 2016.

However, the president’s eldest son also described the meeting as "a nothing," adding, "I wouldn’t have even remembered it until you started scouring through this stuff. It was literally just a wasted 20 minutes, which was a shame."

The interview constituted the first public statement by Donald Trump Jr. since he posted what he called "the entire email chain" of his conversations with music publicist Rob Goldstone setting up the June 2016 meeting with Natalia Veselnitskaya on Twitter. 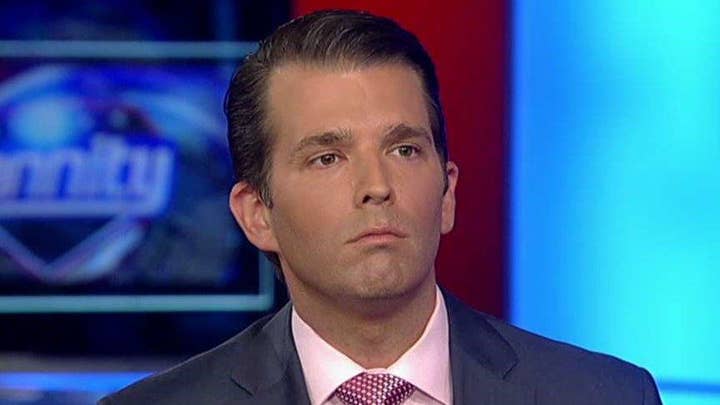 In one of the messages, Goldstone told Trump Jr. that Russian officials were offering "some official documents and information that would incriminate Hillary [Clinton]" as part of "Russia and its government’s support for Mr. Trump."

Trump Jr.’s response email read, in part, "if it’s what you say I love it."

"I had been reading about scandals that people were probably underreporting for a long time, so maybe it was something that had to do with one of those things," Trump Jr. told Hannity when asked about his reaction to Goldstone’s email. "I didn’t know if there was any credibility, I didn’t know if there was anything behind it, I can’t vouch for the information. Someone sent me an email. I can’t help what someone sends me. I read it, I responded accordingly."

Trump Jr. posted the messages in the wake of a series of New York Times reports that revealed more details of the meeting with Veselnitskaya, which was also attended by Paul Manafort, Trump’s then-campaign manager, and Jared Kushner, Trump’s son-in-law and senior adviser.

"For me this was opposition research," Trump Jr. said. "They had something, you know, maybe concrete evidence to all the stories I’d been hearing about … so I think I wanted to hear it out. But really it went nowhere and it was apparent that wasn’t what the meeting was about." 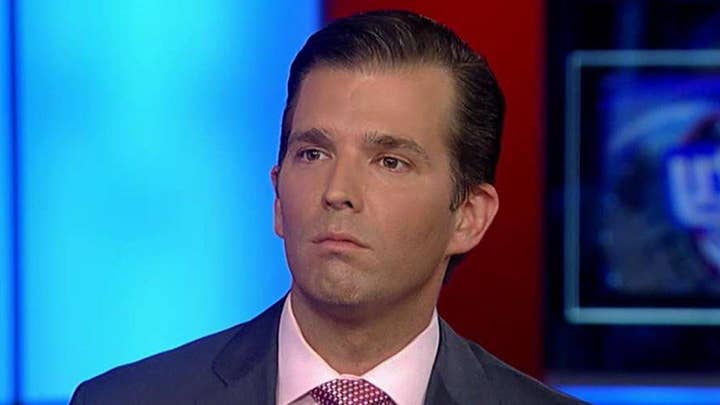 Trump Jr. said that Goldstone apologized to him for wasting his time after the meeting, which lasted approximately 20 minutes.

"I think what happened [is] he sort of goosed up, he built up, there was some puffery to the email, perhaps to get the meeting, to make it happen," Trump Jr. said. "In the end, there was probably some bait-and-switch about what it was really supposed to be about."

The Times claimed that Trump Jr. tweeted images of the emails after "he was told NYT was about to publish the contents of the emails."

Veselnitskaya, who Trump Jr. denied knowing prior to the meeting, told NBC News Tuesday morning that she did not have "any damaging or sensitive information about Hillary Clinton," adding, "It was never my intention to have that."

When Trump Jr. was asked for his reaction to Veselnitskaya's interview, he said he was "a little taken aback by her talking about me pressing for the information, but as you can see from the emails, the pretext of the meeting was, 'Hey, we have information.'"

The emails between Trump Jr. and Goldstone contain no evidence that the president’s son was informed of the larger alleged Russian effort to meddle in the U.S. presidential election.

On Tuesday afternoon, President Trump issued a statement supporting his son’s decision to make the email chain public, calling Trump Jr. "a high-quality person" and adding "I applaud his transparency." The president’s outside legal counsel has repeatedly denied that the elder Trump knew about or attended the meeting.

In his interview Tuesday evening, Trump Jr. also denied telling his father about the Veselnitskaya meeting, saying, "There was nothing to tell."

"I think in the grand scheme of the hysteria that’s been talked about over the last eight, nine, ten months with Russia, things are probably different than they were 13 months ago," Trump Jr. concluded. "In retrospect, I know more now, but hindsight’s always 20-20."