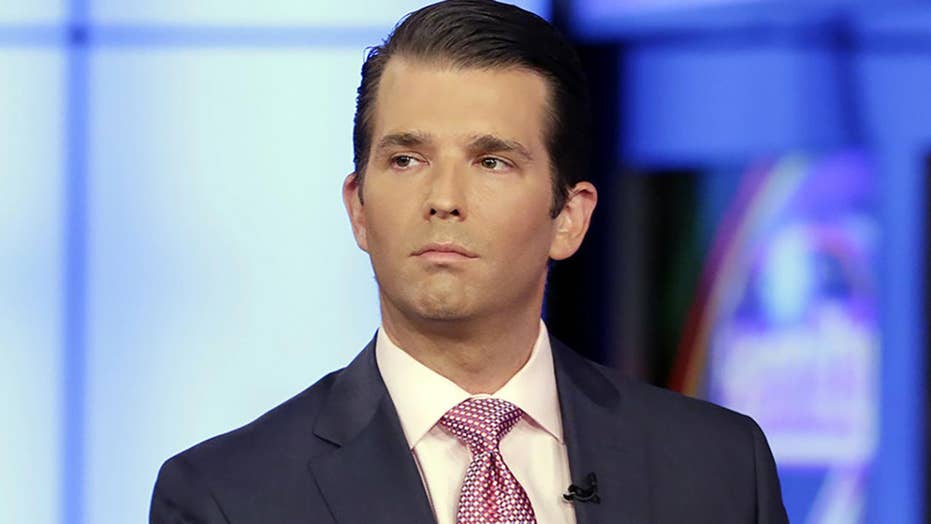 The president's son has agreed to answer questions on six topics, including the 2016 Trump Tower meeting, in a closed-door hearing with the Senate Intelligence Committee; Catherine Herridge reports from Capitol Hill.

Donald Trump Jr. stood by his prior testimony as he returned Wednesday to Capitol Hill for an interview behind closed doors with the Senate Intelligence Committee, following a subpoena from the committee's Republican chairman, North Carolina Sen. Richard Burr.

The president's son was called to field questions related to the committee's Russia investigation, and possibly clear up some confusion surrounding his original statements.

Queries were expected to address issues including Trump Jr.'s knowledge of negotiations for a Trump Tower in Moscow before the 2016 election. During an earlier 2017 interview on Capitol Hill, Trump said he had only been "peripherally aware" of the possible deal. But President Trump's former lawyer Michael Cohen, who is currently serving a prison sentence for offenses including lying to Congress, said he spoke to Trump Jr. about the deal multiple times.

TRUMP JR. BLASTS OMAR, TLAIB ON TWITTER AS LEADERS OF 'THE HAMAS CAUCUS'

When asked Wednesday morning if he was going to correct any of his past testimony, Trump Jr. said there was "nothing to correct."

He reiterated this upon completing the interview, saying: "In reality, there was nothing to change. If there needed to be clarification because [of] Michael Cohen, who let's not forget is serving time right now for lying to these very investigative bodies, I'm happy to do that."

Trump Jr. went on to say he is happy to be done with the matter.

"I'm glad that this is finally over," he said. "We're able to put some final clarity on that, and I think the committee understands that."

When asked if he was concerned about the risk of perjury, Trump Jr. said, "Not at all."

A source familiar with the testimony told Fox News that the interview lasted less than three hours. All of the questions were asked by staff members.

"I don't know why. I have no idea why. But it seems very unfair to me," the president said.

Some Republicans even said Trump Jr. should not have complied with the subpoena, which is believed to be the first subpoena targeting a member of the president's family.