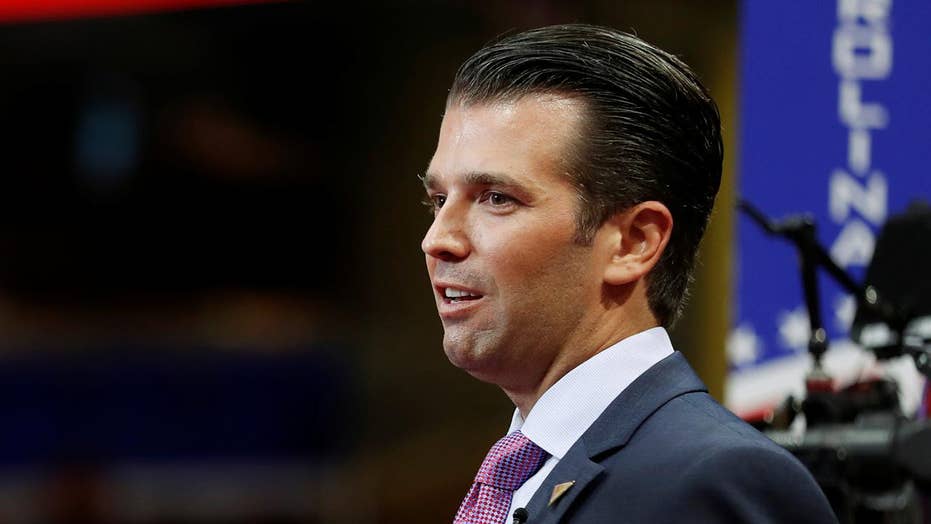 The White House on Monday adamantly defended President Trump's eldest son against a new wave of scrutiny after he acknowledged meeting a Russian lawyer who promised damaging information on Hillary Clinton during the campaign.

“Don Jr. did not collude with anybody to influence the election,” Deputy White House Press Secretary Sarah Huckabee Sanders told reporters at an off-camera briefing. “Bottom line is Democrats had a weak candidate.”

Donald Trump Jr. on Sunday acknowledged the June 2016 meeting with a Russian lawyer who has links to the Kremlin.

Trump Jr. has remained defiant and isn’t apologizing for the meeting, while the White House has presented a united front in defending the president’s son. However, Fox News has confirmed that lawyer Alan Futerfas has been hired to represent Trump Jr. in connection with the Russia probes.

On Monday night, The New York Times reported that Trump Jr. had received an email prior to the meeting in which he was allegedly told that the material being offered was part of a Russian government move to assist his father’s candidacy, according to three people familiar with the email.

The email sent to the president's son came from Rob Goldstone, a former British tabloid reporter who worked to coordinate the June 2016 meeting, the paper said.

“Obviously I'm the first person on a campaign to ever take a meeting to hear info about an opponent... went nowhere but had to listen,” the president’s son tweeted.

The reports, though, were causing new headaches for the Trump family with regard to congressional investigations, as a senior Republican on the Senate Intelligence Committee said Monday the panel should now question Trump's eldest son.

Sen. Susan Collins of Maine told reporters that "our intelligence committee needs to interview him and others who attended the meeting" as part of the panel's probe into Russian interference in last year's election and possible collusion between Russian officials and the Trump campaign.

"Donald Trump Jr. must also testify before the committee to explain why three (people) of the highest level of the Trump administration thought it was appropriate to meet with a Russian source to receive information about a political opponent," Trump said.

The Times published a series of reports on the meeting with lawyer Natalia Veselnitskaya, leading to varying explanations from the Trump team. Trump’s eldest son initially said it was primarily about allowing Americans to adopt Russian children and “mentioned nothing about Mrs. Clinton.”

He later acknowledged he was told the Russian individual “might have information helpful to the campaign.”

During the meeting, Trump Jr. said in a statement, “the woman stated that she had information that individuals connected to Russia were funding the Democratic National Committee and supporting Ms. Clinton.” But he said her statements “were vague, ambiguous and made no sense” and it “became clear that she had no meaningful information.”

He said, “She then changed subjects and began discussing the adoption of Russian children and mentioned the Magnitsky Act. It became clear to me that this was the true agenda all along and that the claims of potentially helpful information were a pretext for the meeting.”

Trump Jr.’s meeting is the first confirmed private meeting between members of President Trump’s inner circle and a Russian national.

Special Counsel Robert Mueller as well as multiple congressional committees are investigating whether Russia interfered in the election in addition to possible collusion with the Trump campaign.