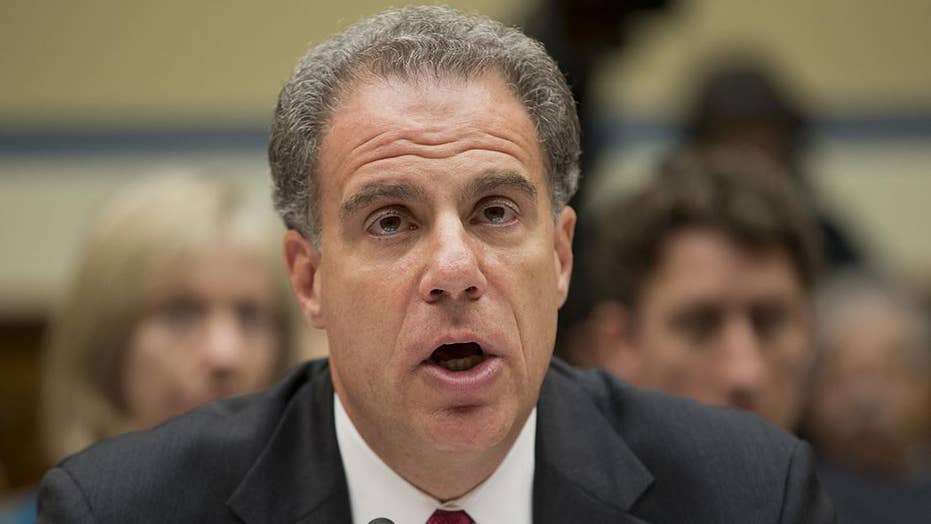 The long-awaited watchdog report on the FBI and DOJ’s Hillary Clinton investigation during the 2016 presidential campaign will be released next Thursday, Justice Department Inspector General Michael Horowitz said.

In a letter to the Senate Judiciary Committee, Horowitz said “we anticipate releasing the report on June 14, 2018.” That day is also President Trump's birthday.

The inspector general also told committee chairman Sen. Chuck Grassley, R-Iowa, in the letter that he has accepted the invitation to testify about the report on June 18, meaning his scheduled appearance before the committee is being delayed again.

Washington has been on edge since last month, when Horowitz told lawmakers the draft report was done. Congressional committees have scheduled, and then postponed, hearings with Horowitz while waiting for the report to be released.

Horowitz’s investigation has looked at a variety of allegations, including whether it was improper for former FBI Director James Comey to make a public announcement about not recommending prosecution over the Clinton email arrangement.

A portion of the report on McCabe had already been released to Congress.

In November, Horowitz said his team has interviewed dozens of people and had reviewed about 1.2 million records in the course of its investigation. He said his team was looking at whether “certain underlying investigative decisions were based on improper considerations.”

The review also looked at whether the Justice Department’s assistant attorney general for legislative affairs “improperly disclosed non-public information to the Clinton campaign” and should have been recused. That referred to official Peter Kadzik, who had been an attorney in the past for Clinton campaign chairman John Podesta.

Horowitz has said the review is looking at whether any DOJ or FBI employees improperly disclosed non-public information.

The inspector general’s review uncovered the anti-Trump texts from FBI official Peter Strzok, who famously called Trump an “idiot” and texted about an “insurance policy” against a Trump presidency. Strzok had been assigned to Robert Mueller’s special counsel probe, but has since been reassigned.