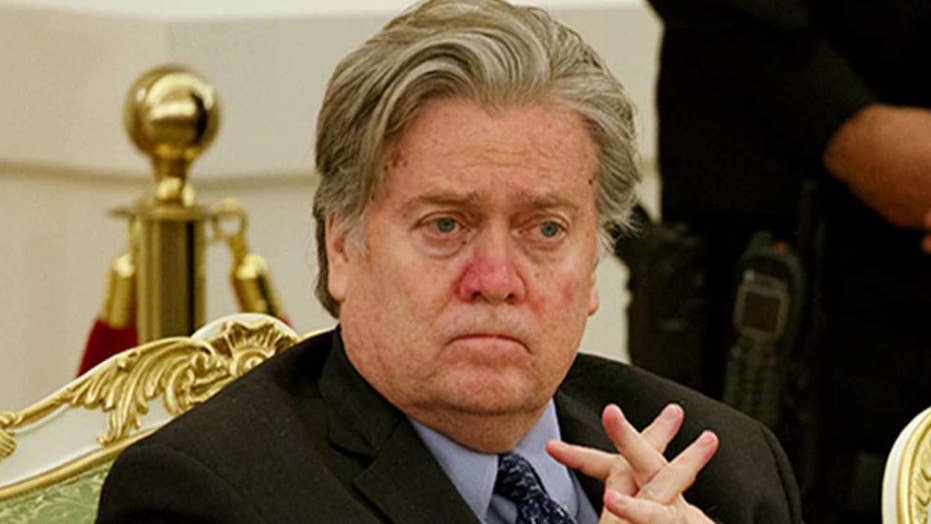 On the roster: Does Bannon know what he’s doing? - I’ll Tell You What: On the road - State leaders take action after Charlottesville - Trump back on Twitter attack - Ooouch!!!

DOES BANNON KNOW WHAT HE’S DOING?
David Catanese asks, “Was his bombshell interview with a liberal magazine a mistake or intentional?” U.S. News: “To believe that [Steve Bannon] would dial up a reporter – any reporter – and not understand that without preconditions, his comments would be free for use, is close to inconceivable. After all, Bannon is no amateur. … Sure, the Anthony Scaramucci blowout comes to mind. … But Bannon is not the Mooch; he's much closer to Machiavelli. … Yet if one is to believe that Bannon never intended to grant the interview, you would have to accept that this was a bizarre slip-up… The other explanation is that this was discreetly intentional, meant to set off a brushfire at a time when his position in Trump's orbit is seen as tenuous and Trump himself is engulfed in a racially charged maelstrom that is threatening the hold of his party. Bannon is fine with either. … For an expansive and potentially embarrassing off-the-record interview, Trump's chief strategist doesn't appear perturbed… Unlike Scaramucci, he's not lashing out. Quite the contrary, he believes every word he said rings true, especially with his boss.”

He sure thinks he does - Washington Free Beacon: “White House chief strategist Steve Bannon said Thursday that his controversial interview with the American Prospect published a day earlier ‘drew fire away’ from President Donald Trump’s criticized remark … Bannon said he successfully ‘changed the [media] narrative’ in his phone call with American Prospect co-founder and liberal journalist Robert Kuttner. … An unnamed White House aide told the Daily Mail that Bannon's interview could be seen internally as a positive—at least in one respect. ‘The president doesn't like all the Democrats' focus on racism, and it's good that Steve mocked it as politically stupid,’ the White House aide said. ‘Plus, distance from actual racists is a good thing.’”

THE RULEBOOK: LEAD BY EXAMPLE
“Happily for mankind, stupendous fabrics reared on the basis of liberty, which have flourished for ages, have, in a few glorious instances, refuted their gloomy sophisms.” – Alexander Hamilton, Federalist No. 9

TIME OUT: MAJOR (WHIS)KEY
NPR: “It's a common refrain among whiskey enthusiasts: Add a few drops of water to a glass to open up the flavors and aroma of the drink. … But the science behind this claim has been murky. A couple of chemists in Sweden set out to figure out why adding a little water would improve the drink's taste. They say the taste improvement happens because alcohol molecules and those that determine whiskey's taste tend to stick together. … Water and alcohol don't uniformly mix together. … [Bjorn Karlsson] says this helps to explain why whiskey is diluted before bottling. Straight out of the cask, it might be up to 65 percent alcohol by volume, though it is typically then diluted to about 40 percent before bottling. … Adding a few drops of water would therefore continue to increase the concentration of guaiacol molecules at the surface, potentially improving the taste.”

Flag on the play? - Email us at HALFTIMEREPORT@FOXNEWS.COM with
your tips, comments or questions.

SCOREBOARD
Trump net job-approval rating: -16 points
Change from one week ago: up 7.4 points

I’LL TELL YOU WHAT: ON THE ROAD
This week, Dana Perino and Chris Stirewalt (who is on location from his home state of West Virginia) discuss the tragedy in Charlottesville over the weekend and the controversial aftermath. Plus, Chris redeems himself in trivia and Dana answers questions from the I’ll Tell You What mailbag. LISTEN AND SUBSCRIBE HERE

STATE LEADERS TAKE ACTION AFTER CHARLOTTESVILLE
WaPo: “City officials across the country are nervously trying to figure out how to avoid becoming the next Charlottesville as alt-right leaders and white nationalist groups vow to stage more rallies in coming days. … Cities also are grappling with what to do about their Confederate monuments, an issue that has suddenly become much more urgent. Some are taking preemptive measures under the cover of night: Four Confederate monuments in Baltimore were hauled away in the early morning darkness Wednesday, and one in Birmingham, Ala., was covered in plywood. In the wake of the violent public clashes in Charlottesville on Saturday, mayors, governors and other civic leaders are taking steps that even a week ago might not have seemed necessary. But they also are facing uncertain challenges, not knowing whether the white nationalist movement will attract a larger following or where the most turbulent demonstrations may occur.”

Poll: Partisan divide over the president’s response - CBS News: “Nearly two-thirds of Americans consider the attack that led to loss of life in Charlottesville an act of ‘domestic terrorism,’ a view that spans partisan lines. But President Trump’s response to Charlottesville finds more division. He gets majority disapproval overall for his response to the events, while most Republicans approve. Republicans interviewed following Tuesday’s press conference also feel Mr. Trump is assigning blame accurately in the matter, while Democrats and Independents, and the country overall, disagree. … Interviewing for this poll began the night before Tuesday’s press conference and continued for two nights after it. … Both partisan groups showed at least slight ticks up in disapproval, with Republicans becoming a bit more disapproving and Democrats even more so.”

Trump’s lawyer forwards email ‘validating’ the boss - NYT: “President Trump’s personal lawyer on Wednesday forwarded an email to conservative journalists, government officials and friends that echoed secessionist Civil War propaganda and declared that the group Black Lives Matter ‘has been totally infiltrated by terrorist groups.’ The email forwarded by John Dowd, who is leading the president’s legal team, painted the Confederate general Robert E. Lee in glowing terms and equated the South’s rebellion to that of the American Revolution against England. Its subject line — ‘The Information that Validates President Trump on Charlottesville’ — was a reference to comments Mr. Trump made earlier this week in the aftermath of protests in the Virginia college town. ‘You cannot be against General Lee and be for General Washington,’ the email reads, ‘there literally is no difference between the two men.’”

The Judge’s Ruling: The balance of protecting free speech - Fox News Senior Judicial Analyst Judge Andrew Napolitano explains why hate speech is still protected under the Constitution: “When the police decline to maintain order -- as was their decision in Charlottesville -- they permit the ‘heckler's veto,’ whereby the audience silences the speech it hates. And when the heckler’s veto comes about through government failure as it did in Charlottesville, it is unconstitutional. It is the functional equivalent of the government's taking sides and censoring the speech it hates or fears.” More here.

TRUMP BACK ON TWITTER ATTACK
LAT: “President Trump attacked two Republican lawmakers, Sens. Lindsey Graham of South Carolina and Jeff Flake of Arizona, in tweets Thursday morning, deepening his feud with members of his party. Both men got the sort of unkind brands Trump favors: ‘Flake Jeff Flake’ and ‘Publicity seeking Lindsey Graham.’ Strikingly, the president offered a semi-endorsement of Kelli Ward, a former Arizona state senator who plans to challenge Flake in a primary next year -- a stand that would put him at odds not only with Flake, but with the state's senior senator, John McCain, whom Trump jabbed, not for the first time, earlier this week. Presidents almost never get involved in primary battles against incumbents of their own parties -- when they have, the efforts have usually ended badly for the White House.”

Julian Assange met with Rep. Dana Rohrabacher to prove Russia did not leak him documents - The Hill

AUDIBLE: RESPECT YOUR ELDERS
“And no, I do not look like him, he looks like me. I'm the oldest.” – Greg Pence, brother of Vice President Mike Pence, said at Rep. Luke Messer’s annual family barbeque on Saturday. The elder Pence is expected to run for Messer’s seat in Indiana’s 6th District, although he has yet to comment on the rumor.

OOOUCH!!!
NY Post: “The internet is full of weird and wonderful videos of sports injuries, but not many of them feature actual aliens. We may not have any proof that whatever is crawling under this man’s skin is extraterrestrial, but there’s simply no other explanation. The calf in question belongs to a Californian man named Angel Bermudez, who pulled out his camera phone when his muscles started contracting after a workout. ‘Look at this s–t,’ Bermudez wrote. ‘Painful yes it was.’ ‘Looked like a[n] … alien in my damn leg was gonna bust out,’ he added. It’s now been viewed more than 15 million times in what is clearly one of the most gnarly cramps you’ll ever see.”