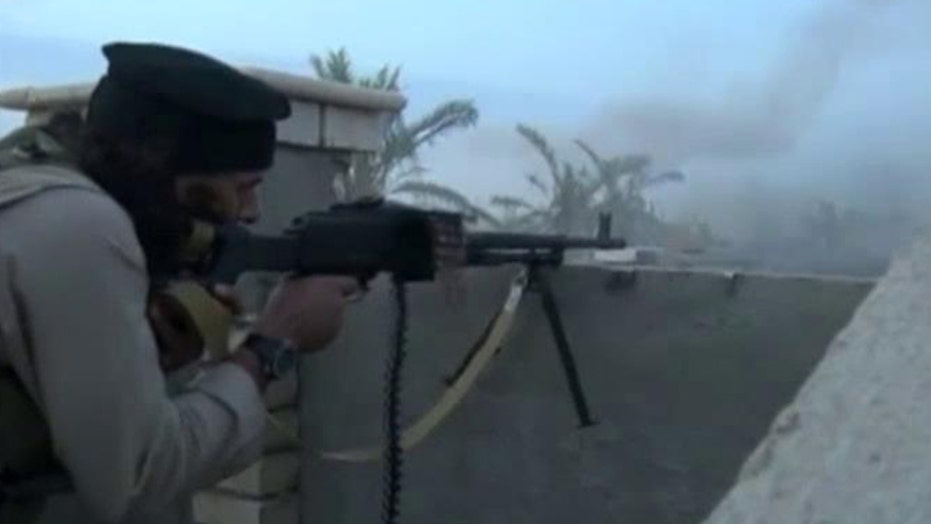 Term struck from prepared testimony on U.S.-led effort against ISIS

EXCLUSIVE: One of President Obama’s top intelligence officers has privately concluded that the situation in Iraq is a “quagmire,” but struck the term from testimony being prepared for him to deliver on Capitol Hill, Fox News has learned.

Internal documents generated inside the Defense Intelligence Agency (DIA) and shared with Fox News show that U.S. Marine Corps Lieutenant General Vincent R. Stewart, the agency’s director, personally agreed with Mideast analysts on his staff who used the word “quagmire” to describe the state of the U.S.-led effort against ISIS, but heeded the advice of other aides who cautioned that the term is “too political” and should not be used in remarks prepared for public consumption.

The documents further show that top analysts inside DIA, one of the nation’s 17 spy agencies and the primary provider of classified intelligence on foreign military capabilities, have concluded that the campaign against ISIS is foundering chiefly because there is no political reconciliation in Iraq, and the Sunni forces that President Obama hopes to train and equip to take on the resilient terrorist army “do not trust” the United States.

The Merriam-Webster online dictionary defines “quagmire” as “a situation that is hard to deal with or get out of.” The term carries especial significance in foreign policy and national security circles, however, because it is commonly associated with America’s deepening involvement in the Vietnam War in the early-to-mid-1960s.

Asked if Iraq today is a quagmire, White House Press Secretary Josh Earnest said it was not the word he would use, even as he conceded that “Iraq is a chaotic place.”

“At the same time,” Earnest continued, “because of the commitment of the central government in Iraq to unify that country and to govern in a multi-sectarian, inclusive way, there is promise for Iraq's future.”

Asked if the Sunni tribal forces that the administration hopes to engage to fight ISIS in Anbar province harbor distrust of American intentions and capabilities, Earnest cautioned against “broad generalization” but acknowledged: “No doubt, there are some who may have some doubts about the United States and our intentions.”

State Department spokesman John Kirby told reporters the anti-ISIS campaign is going to be “a long slog,” but cited progress “across almost all the lines of effort.”

“Nobody said this was going to easy,” said Kirby, a former Defense Department spokesman. “We've long said three to five years. And I think we still hold to that.”

The “quagmire” term also arose at a hearing of the House Armed Services Committee, when Rep. John Kline (R-Minn.) asked Defense Secretary Ashton Carter and U.S. Army General Martin Dempsey, chairman of the Joint Chiefs of Staff, about it. “Where are we in Iraq today? Are we winning? Are we losing? Is it a stalemate? Is it a quagmire?”

Dempsey did not address the specific term, but also eschewed any talk of winning or victory; rather he spoke only about enabling the local forces to engage ISIS militarily.

Outside the Obama administration, however, some respected strategic thinkers have now begun to characterize the situation in Iraq – where ISIS controls major cities like Ramadi and Mosul, along with vast swaths of eastern Syria – in the very terms that General Stewart, at DIA, so studiously avoided using in his prepared testimony.

In an essay entitled “Prelude to a Quagmire,” published on ForeignPolicy.com, Barry R. Posen, director of the Massachusetts Institute of Technology’s Security Studies Program, cautioned that the administration’s slow buildup of “advisers” in Iraq – now exceeding 3,000 troops – is placing the U.S. on “a slippery slope” that recalls America’s ill-fated involvement in Vietnam.

“This has that feel,” Posen told Fox News in an interview, “of taking little steps that the government believes are discreet, discriminate, reversible, practical, and effective that turn out to be none of those things, and instead commit you ever more deeply to the fight. Because it always turns out that war is more complicated than you think.”

Posen, who is also a professor of political science, expressed puzzlement that the president and his top national security advisers have not learned the lessons of Vietnam, where – unlike present-day Iraq – U.S. experience was quite limited when the first substantial troop deployments were being made.

“One of the reasons you might be hearing from the intelligence agencies some concern that we're entering a ‘quagmire’ is because in this case, we do know how complicated the place is,” Posen said. “We do know that solutions [in Iraq] depend on a range of political accommodations inside the country that are very improbable. We know that once we commit American military power, it's very difficult to accept reverses, or accept stalemate…So in this particular case, we should be better at avoiding a quagmire than we were in Vietnam. But nevertheless, it appears that in some strange way, we're going through the same steps and the same motions.”

Spokesmen at the Defense Intelligence Agency did not respond to multiple requests for comment.