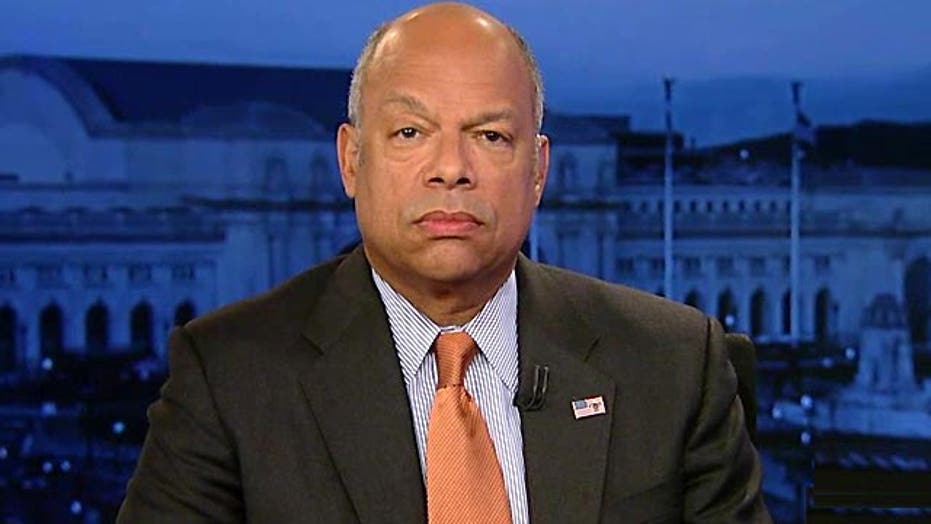 The Department of Homeland Security is suspending the rollout of President Obama's immigration actions, after a federal judge issued an order blocking them.

DHS Secretary Jeh Johnson told Bret Baier on "Special Report" Tuesday that he strongly disagrees with the judge's ruling and says it will be appealed promptly.

“At the moment we are standing down our plans for executive action, pursuant to the judge’s injunction but I believe it will be reversed.”

A DHS agency had been set to start accepting applications on Wednesday for the first phase of the plan -- an expanded program shielding young immigrants who came to the U.S. illegally from deportation. Johnson said that is now suspended.

Johnson said DHS also will suspend its plans for implementing the broader portion of Obama's immigration overhaul, which was set to launch in May -- a program to give a deportation reprieve to potentially millions of illegal immigrant parents of legal residents.

The decision comes after U.S. District Judge Andrew Hanen in Texas delivered a blow to the administration. He issued a temporary injunction on Monday after hearing arguments last month, allowing a lawsuit aimed at permanently stopping the actions to make its way through the courts.

He said that if the program were allowed to proceed at this point, "The genie would be impossible to put back into the bottle." The lawsuit was brought by 26 states.

The DHS secretary continued to defend the merits and legality of the program on Tuesday.

"The Department of Justice, legal scholars, immigration experts and even other courts have said that our actions are well within our legal authority. Our actions will also benefit the economy and promote law enforcement. We fully expect to ultimately prevail in the courts, and we will be prepared to implement [the actions] once we do," Johnson said.

Republicans, meanwhile, are seizing on the federal court order to build own their case for stalled legislation that would reverse those directives.

The decision "is a major turning point in the fight to stop Obama's lawless amnesty," Sen. Ted Cruz, R-Texas, said in a statement.

Congress is effectively stuck on how to fund the Department of Homeland Security past the end of the month -- and the immigration actions are the sticking point.

Senate Democrats repeatedly have blocked a House-passed bill that includes the immigration provision. Each chamber is now waiting for the other to act, with the Feb. 27 funding deadline fast-approaching.

But Republicans see Monday's court order as a boost for their side, and are using it to urge Democrats to drop their resistance to the bill.

"The Senate Democrats who are filibustering Department of Homeland Security funding should look hard at this ruling," Cruz said.

GOP leaders of the House and Senate hit the same argument.

House Speaker John Boehner -- who over the weekend told "Fox News Sunday" that "the House has acted" and he's prepared for a possible partial DHS shutdown -- said in a statement: "Hopefully, Senate Democrats who claim to oppose this executive overreach will now let the Senate begin debate on a bill to fund the Homeland Security department."

But despite the round of Republican statements, Democrats did not appear to be budging. And with Congress out this week, lawmakers have just a few days left to strike a deal -- or else DHS will face a partial shutdown.

Sen. Chuck Schumer, D-N.Y., a supporter of the president's immigration actions, on Tuesday put the onus on Republicans to move through a funding bill before the deadline.

He said "it is completely unacceptable for Republicans to hold up funding for the Department of Homeland Security while the case wends its way through the legal system."

Schumer also said the ruling "is very unlikely to be upheld."

For the time being, the Obama administration is set to appeal.

White House Press Secretary Josh Earnest, in a statement, reiterated the administration's position that Obama's executive actions were within the bounds of the law.

"The Supreme Court and Congress have made clear that the federal government can set priorities in enforcing our immigration laws-which is exactly what the President did when he announced commonsense policies to help fix our broken immigration system," Earnest said, later adding, "The district court's decision wrongly prevents these lawful, commonsense policies from taking effect and the Department of Justice has indicated that it will appeal that decision."

An appeal by the administration would be handled by the Fifth Circuit Court of Appeals in New Orleans.