Nielsen on the administration's plan to secure America

Department of Homeland Security secretary speaks out on 'Special Report.'

Homeland Security Kirstjen Nielsen told Fox News' "Special Report" Tuesday night that the Trump administration is "on track" to meet this week's court-imposed deadline to reunited thousands of children who have been separated from their families at the U.S.-Mexico border.

"We’re working hand-in-glove with [the Department of Health and Human Services] and it's certainly our intention to reunify all families that are suitable," Nielsen told host Bret Baier.

A federal judge has given the administration until Thursday to reunite 2,551 separated children aged 5 and older. The Justice Department said in a court filing Monday that 1,187 children had been reunited with parents, sponsors and guardians by the Health and Human Services Department's Office of Refugee Resettlement.

The court filing also indicated that 463 adults had been deported without their children, but the government said that number is based on case notes, is under review and could change.

Nielsen told Baier that whether those families are reunited is "in part ... up to the parents." 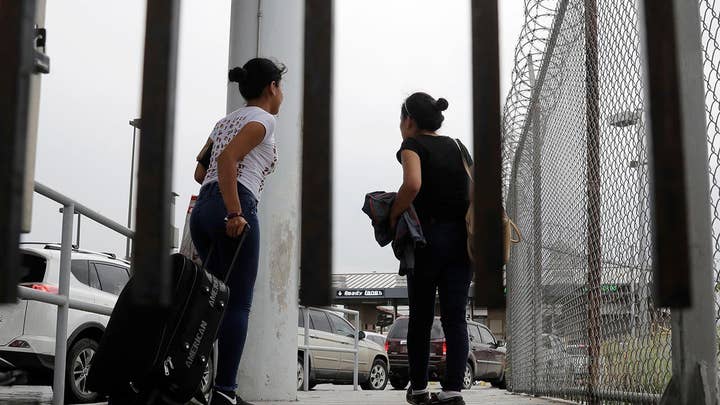 "If the parents contact us and they would like to be reunited, we of course will work with them," she said. "But as you know, the way the process works is the parents always have the choice to take the children with them. So, these are parents who have made the decision not to bring the children with them, and then we will continue to work with the court to understand how we can best comply with the order."

As Nielsen spoke, the Justice Department and the ACLU were appearing before U.S. District Judge Dana Sabraw after failing to agree on on how much time parents should have to decide whether to seek asylum after they are reunited with their children.

The administration proposed a four-day waiting period, three days shorter than the ACLU proposed, according to a government filing in federal court. The longer waiting period would increase costs and occupy limited beds, David Jennings, an official at U.S. Immigration and Customs Enforcement, said in a declaration filed with the court. It costs $319 a day to detain a family member, and there are about 2,500 to 2,700 beds nationwide to house families.

Sabraw imposed a temporary halt last week on deporting reunified families after the ACLU requested the one-week waiting period, citing "persistent and increasing rumors ... that mass deportations may be carried out imminently and immediately upon reunification." The ACLU argued parents needed the time to discuss whether to seek asylum with their children, lawyers and advocates.

"Things are really a mess on the ground and we absolutely need seven days," said ACLU attorney Lee Gelernt, who threatened to file a number of affidavits in an effort to prove "that parents have no idea what's going on."

"We have many reasons to be proud of this effort," Stewart said. "The government has worked very hard in line with your honor's orders. We want to be clear on our efforts of good faith and make an effort to accommodate concerns."

Sabraw praised the government's progress on completing reunifications, calling it "a remarkable achievement" and "yeoman's work." However, Sabraw also said the lack of information about about the whereabouts of many parents spoke to "a policy that was in place that resulted in large numbers of families being separated without forethought as to reunification and keeping track of people, and that's the fallout we're seeing."

Fox News' Nicole Collins and The Associated Press contributed to this report.