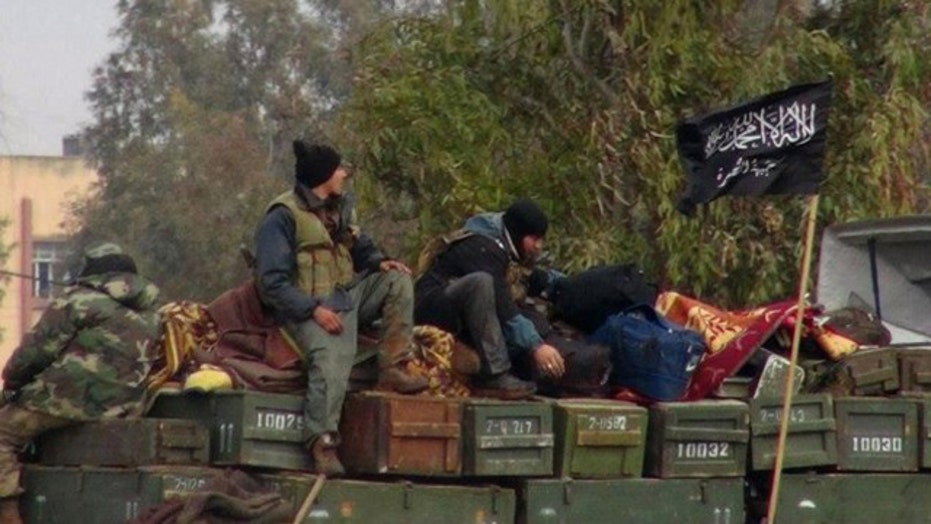 Who is the Khorasan Group?

US officials say the airstrikes in Syria were aimed in part to disrupt an 'imminent attack' by Al-Qaeda-tied fighters. What happened to Al-Qaeda being 'on the run'?

WASHINGTON – There is no indication of advanced Al Qaeda or Islamic State group terror plotting inside the United States, but airstrikes in Syria may have temporarily disrupted attack planning against U.S. or Western targets, according to a security bulletin Tuesday from the FBI and the Homeland Security Department.

U.S. and Arab allies carried out more than 200 airstrikes against the Islamic State group in Syria and Iraq, the U.S. on its own launched more than 20 Tomahawk cruise missiles and other ordnance against eight Khorasan Group targets near Aleppo in northwestern Syria, Pentagon officials said.

Earlier Tuesday, the Obama administration said the strikes against the Khorasan group were intended to stop a possible terror attack against an unknown location.

"We hit them last night out of a concern that they were getting close to an execution date of some of the plans that we have seen," Attorney General Eric Holder told Yahoo News in an interview. "And the hitting that we did last night, I think, will probably continue until we are at a stage where we think we have degraded their ability to get at our allies or to the homeland."

Because of intelligence about the collaboration among the Khorasan group, al-Qaida's Yemeni bomb-makers and Western extremists, U.S. officials say, the Transportation Security Administration in July decided to ban uncharged mobile phones and laptops from flights to the U.S. that originated in Europe and the Middle East.

Holder said those enhanced security measures were "based on concerns we had about what the Khorasan Group was planning to do."

In a five-page Joint Intelligence Bulletin obtained by The Associated Press, the government warned that airstrikes targeting the Al Qaeda-linked Khorasan and Islamic State groups could also embolden homegrown violent extremists inside the United States who already have grievances about the U.S. because of military action in predominantly Muslim countries.

While the intelligence community hasn't viewed Islamic State an immediate threat to the U.S. homeland, officials have been very concerned about Khorasan operatives plotting attacks against the U.S.

The Khorasan group is a cadre of veteran Al Qaeda fighters from Afghanistan and Pakistan who traveled to Syria to link up with the Al Qaeda affiliate there, the Nusra Front.

But the Khorasan militants did not go to Syria principally to fight the government of President Bashar Assad, U.S. officials say. Instead, they were sent by Al Qaeda leader Ayman al-Zawahiri to recruit Europeans and Americans whose passports allow them to board a U.S.-bound airliner with less scrutiny from security officials.

The U.S. has for months been concerned about Americans and other Westerners going overseas to join the fight. Last week the FBI said there were some 8,550 people associated with "foreign terrorist fighter activity," on the no-fly list, a list of known or suspected terrorists banned from flying to, from or within the U.S.