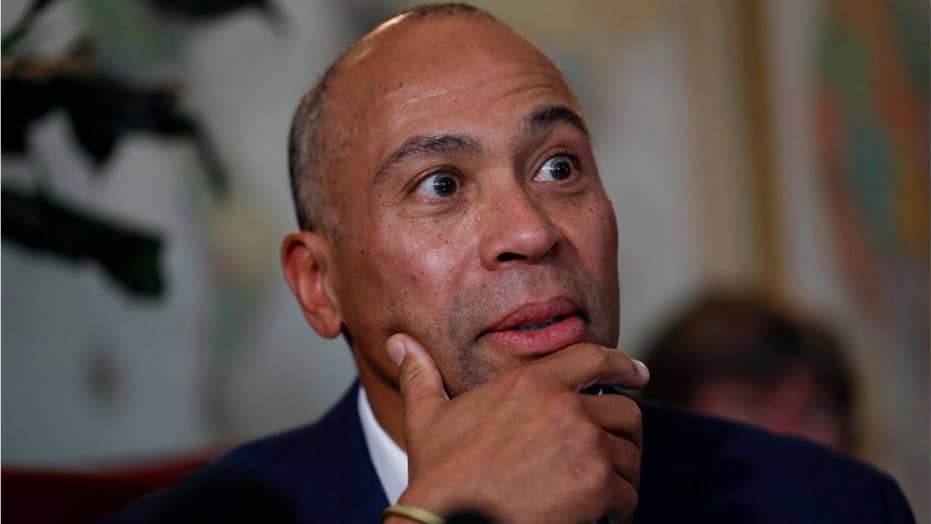 A Deval Patrick campaign event was canceled at Morehouse College in Atlanta when reportedly only two people showed up. The former Massachusetts governor is struggling to draw crowds.

Former Massachusetts Gov. Deval Patrick made one of the latest entries into the Democratic presidential primary and has struggled for attention in the crowded race.

Patrick has worked at the NAACP Legal Defense Fund, the Civil Rights Division of the Department of Justice and Bain Capital, the same investment firm Mitt Romney took heat for founding during his presidential run.

Patrick, whose campaign is hurting for endorsements, money, organization and attention due to his late entry, is narrowing his focus to New Hampshire and South Carolina with the goal of building momentum to stick in the race for the long haul.

Here is where Patrick stands on some of the top issues voters care about in the 2020 campaign.

Patrick has said he decided to get into the race so late because he did not feel any of the Democrats running had a sufficiently unifying vision. He fittingly takes a more moderate position on health care compared to many of the party's progressives. He proposes a public option that would compete with private insurance in order to drive costs down.

This is in contrast to the "Medicare-for-All" plans supported by Sens. Elizabeth Warren, D-Mass., and Bernie Sanders, I-Vt., which would eliminate private insurance from the market.

"The public option will be more cost effective to the government and affordable to consumers. The competitive tension between the private and public systems will force insurers to reduce the cost of insurance, and improve offerings overall," Patrick says on his website.

Patrick also promises to end surprise billing by backing legislation that addresses the issue and work to increase the government's leverage in negotiating drug prices.

Patrick touts his experience in Washington, DC, and running a state as some of his top assets as a candidate. On the environment, Patrick claims he has more experience than anyone.

"As governor of Massachusetts, I confronted climate change head-on a decade before other political leaders were even paying attention to this issue," he tweeted in January. "Others have big deas for taking on climate change; I have results."

Patrick has not been a vocal supporter of some of the more radical climate change agendas floated within the Democratic party, particularly Rep. Alexandria Ocasio-Cortez's Green New Deal resolution. The climate plan on his campaign website, however, sets a goal of bringing the U.S. to net-zero carbon emissions by 2040, which is a decade earlier than the goal most other candidates set.

But Patrick's climate plan is based almost exclusively on technology and green energy, leaving out many of the social justice elements in the Green New Deal.

With income inequality and corporate power major issues in the Democratic primary, many candidates have seized on the 2017 tax cuts passed by President Trump and congressional Republicans as a campaign issue. Those cuts dropped the corporate income tax rate from 35 percent to 21 percent, leaving many Democrats calling for an increase back to 35 percent.

Patrick wants to raise corporate income tax rates to 25 percent, "reflecting the current consensus among the business community for a globally competitive rate." He would not stop there, however.

Patrick would eliminate capital gains taxes. Instead, he would treat income made through investment the same as any other form of income, eliminate "hundreds of deductions, exclusions and credits" in the tax system and boost the estate tax to 55 percent, with an exemption for the first $10 million.

"Government is about how we define the civilization we want; taxes are how we pay for it," Patrick says on his website. "Our guiding principle will be the belief that taxes are not a penalty but just the cost of our civilization."

Patrick advocates a "compassionate" immigration policy that also includes border security, an issue that is non-existant to many Democratic candidates.

"Rather than caging children and demeaning families, we will support comprehensive immigration reform that provides a path to citizenship for undocumented residents of our country, Dreamers and others in the country without legal status," Patrick writes on his website. "We must also secure our borders and other ports of entry, but with more modern, more effective and less ham-fisted ways than a physical wall."

Addressing the roots of the problem, Patrick wants to "streamline" the way foreigners can get visas to work in the U.S. and speed up the naturalization process, "ending the endless backlog that frustrates the dreams of so many aspiring Americans and pushes others into illegal border crossings rather than legal processes. We will make naturalization more affordable and more attractive for eligible permanent residents."

But despite his innovative proposals, Patrick does hold standard Democratic positions on allowing a pathway to citizenship for illegal immigrants already in the U.S. and protecting "Dreamers" brought to America before they were 18 from deportation.

Patrick, like most of the Democratic field, wants to decriminalize marijuana but allow states to manage their cannabis policies. Additionally, he would push "support for legal marijuana entrepreneurs in communities disproportionately affected by criminal marijuana enforcement," reflecting the social justice goals of the Marijuana Opportunity Reinvestment and Expungement Act (MORE Act) which is popular among congressional Democrats.

He also says he will eliminate mandatory minimum sentences, abolish private prisons, push for a more diverse judicial branch and increase funds for public defenders -- the often overworked and underpaid lawyers who represent criminal defendants who don't have the money for their own counsel.

Patrick, like the entire rest of the Democratic field, is against the death penalty. He promises to immediately stop federal executions while making an effort to stop state executions as well.

"The Patrick Administration will use every tool at its disposal to prevent states from carrying out executions using cruel and experimental means, including by reversing the Trump Administration’s refusal to regulate the importation of death penalty drugs," Patrick writes on his website.