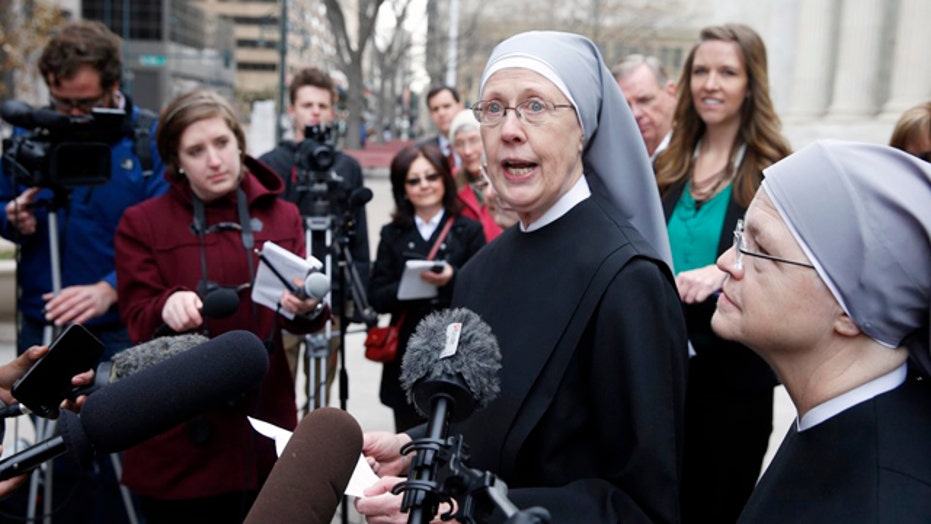 A federal appeals court in Denver ruled on Tuesday against a group of Colorado nuns who challenged a provision in the Affordable Care Act that requires employers to provide insurance policies covering contraception.

Though religious groups are already exempt from covering contraceptives, the plaintiffs – the Little Sisters of the Poor as well as four Christian colleges in Oklahoma – argued the exemption doesn’t go far enough because they must sign away the coverage to another party, making them feel as though they had a hand in providing contraceptives.

The court ruled that because the Little Sisters of the Poor had the option of signing a form that would transfer covering contraceptives to a third-party, they failed to show that the ObamaCare mandate placed a burden on their right to exercise freedom of religion.

Following the ruling, Sister Loraine Marie Maguire said “we simply cannot choose between our care for the elderly poor and our faith.”

Maguire added that forcing the Little Sister of the Poor to make that choice “violates our nation’s commitment to ensuring that people from diverse faiths can freely follow God’s calling in their lives.”

Mark Rienzi, senior counsel for the Becket Fund for Religious Liberty and the lead attorney for the nuns, said there have been “untold millions of people” who have gotten contraceptives without involving nuns and that there was “no reason the government cannot run its programs without hijacking the Little Sisters and their health plan.”

"Although we recognize and respect the sincerity of plaintiffs' beliefs and arguments, we conclude the accommodation scheme ... does not substantially burden their religious exercise," the three-judge panel wrote.

The same court ruled last year that for-profit companies can join the exempted religious organizations and not provide the contraceptives. The U.S. Supreme Court later agreed with the 10th Circuit in the case brought by the Hobby Lobby arts-and-crafts chain.

The birth-control rule has been among the most divisive aspects of the health care overhaul. Some advocates for women praise the mandate, but some religious groups have decried it as an attack on religious freedom.

Two years ago the U.S. Supreme Court offered the nuns a short-term reprieve on the exemption pending their appeal.

The birth-control exemption was extended to other religious nonprofits while the case was being heard. Those included Wyoming Catholic College in Casper, Wyoming.

The three-judge panel included one judge who also ruled in the Hobby Lobby decision. The judges drew a distinction between the two cases, noting that the religious nonprofits have an exemption process that wasn't available to Hobby Lobby.

While Hobby Lobby faced the prospect of fines for not providing coverage, the judges noted, the nonprofits must only file for an exemption, making the burden less substantial.

"The accommodation relieves plaintiffs from complying with the mandate and guarantees they will not have to provide, pay for, or facilitate contraceptive coverage," the judges wrote.

The group that brought the lawsuit on behalf of the nuns and religious schools, the Becket Fund for Religious Liberty, said in a statement that it would appeal the decision to the U.S. Supreme Court.

"There is no reason the government cannot run its programs without hijacking the Little Sisters and their health plan," Becket Fund lawyer Mark Rienzi said in a statement.