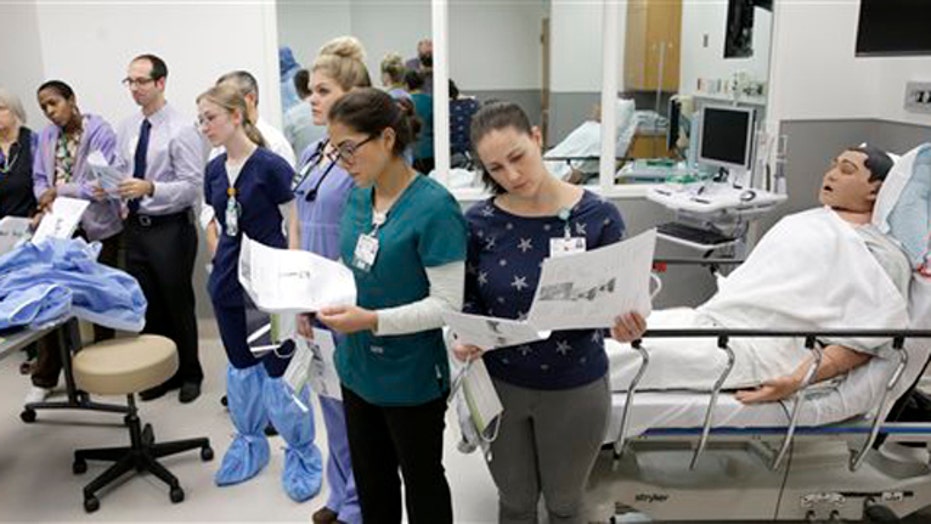 Where is our money going?

Congressional Democrats and allied groups are ramping up claims that the Ebola response is suffering from a budget crunch, even as Republicans and independent fact-checkers question the argument.

The latest call came Thursday from House Minority Leader Nancy Pelosi, who demanded that lawmakers return to session to revisit the budget.

“The Appropriations Committee should return to Washington immediately and convene hearings to discuss and debate the issue of funding levels for NIH, CDC and related agencies in light of the public health challenges posed by the Ebola virus,” she said in a statement.

Others have suggested Republicans specifically are to blame for problems with the Ebola response.

On Oct. 12, the Agenda Project Action Fund released a political ad called “Republican Cuts Kill,” which according to the group, has been scheduled to air in Kentucky, North Carolina, Kansas, and South Dakota – all states with high-stakes Senate elections in November. The ad juxtaposes pictures of dead bodies and body bags in West Africa with Republican lawmakers like Sens. Mitch McConnell, Ted Cruz, and Rand Paul.

“Like rabid dogs in a butcher shop, Republicans have indiscriminately shredded everything in their path, including critical programs that could have dealt with the Ebola crisis before it reached our country,” said ad producerErica Payne, founder of the Agenda Project Action Fund.

The talking points were spurred by statements made by National Institutes of Health head Dr. Francis Collins to The Huffington Post on Oct. 10.

"Frankly, if we had not gone through our 10-year slide in research support, we probably would have had a vaccine in time for this that would've gone through clinical trials and would have been ready," Collins said. He added that some therapeutics to fight the virus "were on a slower track than would've been ideal. ... We would have been a year or two ahead of where we are, which would have made all the difference.”

But fact-checkers and number-crunchers say the actual budgets do not bear out claims that Republicans have starved research for the Centers for Disease Control and Prevention (CDC) and NIH through the Obama administration.

“Claims that CDC and NIH have not had enough funding to do Ebola research are nonsense,” said Chris Edwards, director of tax policy studies at the Cato Institute.

At the CDC, funding has remained relatively steady.

Washington Post fact-checker Glenn Kessler notes that the CDC budget has “bounced around” $6.5 billion every year of the Obama administration.

In both 2013 and 2014, it was Congress that boosted the funding after the administration had proposed scaled-back budgets.

According to reports, when the 2014 budget was passed in January, the CDC’s budget rose to $6.9 billion, $567 million more than it received in 2013 and more than the agency anticipated, as the president only requested $6.6 billion.

While it appears stagnant from 2009 numbers, it is still double the budget the CDC was getting in 2000 ($3.4 billion), Edwards points out.

But Kessler also points out that NIH was given an extra $10 billion in stimulus funds in 2009.

While neither agency was getting all the money it wanted, Kessler points out that what happened in the last few budgets was not a “slash and burn” by Republicans, but a tug-of-war between Congress and the president which culminated in the 2013 sequestration cuts. Those cuts, including a $1.5 billion cut to NIH, affected all government agencies indiscriminately.

“There’s no doubt that spending has been cut, or at least failed to keep pace with inflation, but the fingerprints of both parties are on the knives,” Kessler wrote in The Washington Post Fact Checker.

Kessler gave the Democratic allegations that Republican budgets were at fault for the poor Ebola response four “Pinocchios,” and called them “absurd.”

Edwards said a better way to connect the budgets with the Ebola crisis is to look at how the money is being spent. Republican Louisiana Gov. Bobby Jindal complained in a recent op-ed that “in recent years, the CDC has received significant amounts of funding. Unfortunately, however, many of those funds have been diverted away from programs that can fight infectious diseases, and toward programs far afield from the CDC’s original purpose.”
On that note, Republicans are trotting out various NIH funding projects they say show questionable – even wasteful – spending.

“It’s funny that the Democrats are quick to point fingers when it’s been this administration pushing the CDC to spend time and resources on bike lanes and farmers markets instead of prioritizing national security and the health of Americans,” Republican National Committee spokeswoman Kirsten Kukowski said.

The Washington Free Beacon rounded up several projects ranging from $53,202 for studying sighs to more than $2.4 million for developing origami condoms.

“The bigger story here is that the president and the Democrats have once again been leading from behind on an issue that Americans are concerned about.”

But where there is money on Capitol Hill, there’s mandated oversight, and if members of Congress are quick to point fingers, they might want to point some of them back at themselves, said Edwards. Their job includes making sure the agencies have what they need, and are spending it on their stated priorities.

“Not enough blame is put on the congressional committees,” he said, “which are supposed to be conducting oversight of these agencies.”