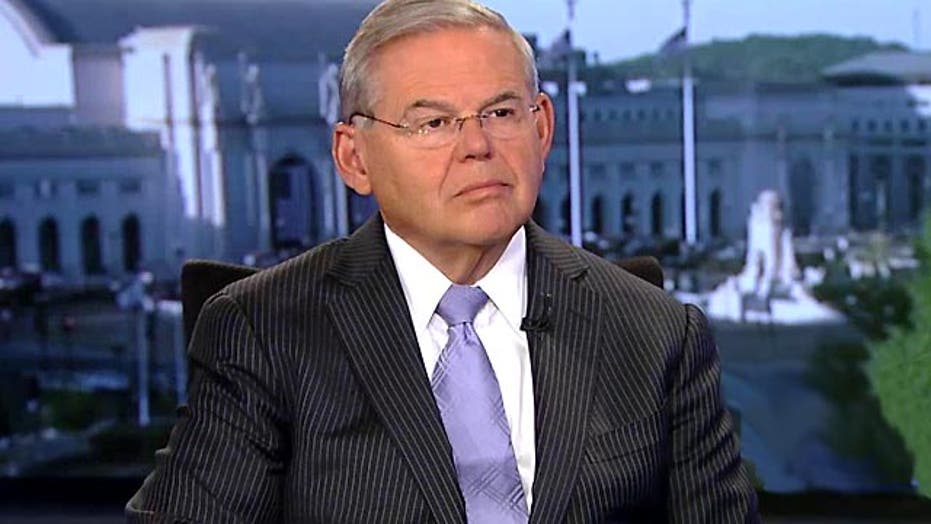 Insight from Democratic critic of the administration

The White House dispatched Vice President Joe Biden to Capitol Hill Wednesday to sell Democrats on the newly announced Iran nuclear deal, as several influential members voiced reservations about giving it their seal of approval in a vital vote this fall.

Biden was meeting first with House Democratic Leader Nancy Pelosi, though the tougher lift may be on the Senate side. In the aftermath of the deal announcement in Vienna, senior Democratic senators made clear they were withholding judgment.

"We're basically legitimizing Iran's nuclear program," Sen. Bob Menendez, D-N.J., told Fox News, voicing concerns about what Tehran gets in return, including the likely lifting of an arms embargo and leverage over the timing of certain nuclear inspections.

"At the end of the day, the challenge here is that 10 to 12 years from now, does Iran have a pathway towards a full industrial-sized nuclear program and the possibility of breaking out to a weapon? And if so, all you've done is delayed the question of Iran's nuclear ambitions."

Menendez is a leading skeptic but plenty more are staying on the sidelines and could face more pressure from constituents during the August recess.

Biden started calling his Democratic colleagues on Capitol Hill Tuesday before making house calls Wednesday morning. President Obama is also holding a press conference Wednesday afternoon where the Iran agreement is sure to come up. Meanwhile, Obama and senior members of his national security team are calling lawmakers to brief them on the contents of the agreement that is well over 100 pages long.

"I routinely hesitate to predict congressional outcomes," White House Press Secretary Josh Earnest said Tuesday, adding they would "encourage members of Congress to try to keep as open a mind as possible to evaluate this agreement on the merits."

After receiving a copy of the pact, lawmakers will have 60 days to read the fine print, vote yea or nay -- or take no action. The deal itself curbs Iran's nuclear program in exchange for billions of dollars in relief from international sanctions that have been crippling the Iranian economy.

"I will only support it if this deal prevents every Iranian pathway to develop a nuclear weapons capability," said Sen. Chris Coons, D-Del., who listed several other provisions he will check in the agreement.

Rep. Steny Hoyer of Maryland, the No. 2 Democrat in the House, joined many other Democrats who said verification provisions will determine whether they support it.

"Without verification, this is a useless agreement," Hoyer said. A concern is that the deal allows Iran 14 days to decide whether to grant inspection requests for suspected, but undeclared, nuclear sites. They can be overruled, but are allowed to drag out the process.

Republicans were uniform in their opposition, with House Speaker John Boehner saying the GOP would do what it can to undermine the deal. If Congress votes to disapprove the agreement, Obama reiterated Tuesday that he would veto the measure.

That means Democrats are key.

A two-thirds majority in both the House and Senate would be needed to override a veto, and Republicans can only get there with Democratic support.

"That's not a scenario that we think is going to happen," Earnest told reporters on Air Force One en route to Philadelphia. He said the administration feels confident that if lawmakers can take off their political hats and focus on the details of the deal "there's a lot in here to like."

Even the chairman of the Senate Armed Services Committee, Sen. John McCain, R-Ariz., said he doesn't see how Congress can prevent the deal from being implemented.

"You can't stop it," McCain said. "It can be unraveled. It can be undone by a Republican president who cares about the security of this nation."

Congress generally has a say over U.S. sanctions, not necessarily every aspect of the deal. But a vote of disapproval by Congress could nevertheless cause problems for implementation.

The foreign policy committees in both chambers -- and possibly other panels on intelligence and the armed services -- are expected to begin holding hearings next week.

Among the key Democratic senators to watch are New York Sen. Chuck Schumer, the No. 3 Democrat in the chamber who has strong ties to Jewish donors, and Maryland Sen. Ben Cardin, the ranking Democrat on the Senate Foreign Relations Committee.

Schumer said in a statement Tuesday that he would "go through this agreement with a fine-tooth comb, speak with administration officials, and hear from experts on all sides."

Cardin said there is "no trust" for Iran, and "we need to ensure the negotiations resulted in a comprehensive, long-lasting and verifiable outcome that also provides for snap-back of sanctions should Iran deviate from its commitments."