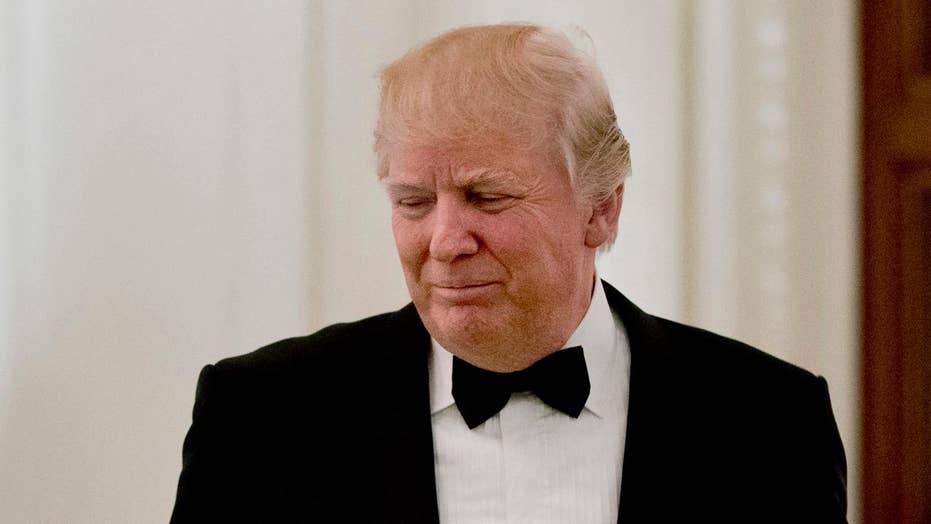 Some Democrats are calling for President Trump's impeachment

Even before Donald Trump had taken the oath of office, some House Democrats, apparently stunned at the election results and bruised by being left entirely out of the Washington power structure, were suggesting impeachment was in order. The movement has only grown stronger more than a month into the Trump presidency.

It is centered around two alleged violations that Trump critics maintain rise to the level of high crimes and misdemeanors.

"I mean on day one he was in violation of the Emoluments Clause," Rep. Keith Ellison (D-MN.) said in a recent CNN town hall.

The Emoluments Clause  to which Ellison refers, reads in part, "...no Person holding any Office of Profit or Trust under them, shall, without the Consent of the Congress, accept of any present, Emolument, Office, or Title, of any kind whatever, from any King, Prince, or foreign State."

Ellison's charge is based on Trump's children now running his businesses.  With no blind trust in effect, some believe there is a risk of bribery. "I think a reasonably strong case can be made and a number of constitutional scholars have  made that case, says  Julian Epstein, former counsel to the House Judiciary Committee during the Clinton impeachment.

Bruce Fein, a Deputy Attorney General during the Reagan Administration, agrees. "If you can prove bribery by circumstantial evidence or something that a foreign government is patronizing the Trump Hotel in exchange for some benefit in trade or military sale, that's bribery. That clearly satisfies the impeachment standards, leaving open the possibility of bribery," he says.

The second potential violation is the charge Trump team's had Russian connections. "This President absolutely was in collusion with the Kremlin and Putin and Russia during the campaign," alleges Rep. Maxine Waters,D-Calif.

Fein believes  Waters' argument is weak, noting Trump had not been sworn into office when the alleged violation occurred. "Obviously what  he did wasn't corrupting government, he wasn't even president yet exercising presidential powers. It verges on frivolity, in my judgment," he says.

Indeed, Republicans say the charges of a Trump-Putin collusion thus far are based on anonymous leaks and hearsay. "We don’t have any evidence that they talked to Russians," House Intelligence Committee Chairman Devin Nunes said during a press briefing on Monday.

But impeachment is more than a legal process, it's a political one, too, something that Sen. Ted Cruz, R-Texas, noted in a panel discussion with radio talk show host Mark Levin at last week's CPAC Convention.

"Do the Democrats understand that they need to control the House of Representatives to impeach somebody?" Levin asked of Cruz.

Cruz replied to uproarious applause, "The Democrats right now are living in an alternative universe."

Epstein believes that may change."The president's support is a mile wide but an inch deep," he says. "If the president's approval numbers, which are in the low 40s right now, dip into the mid- 30s or the low 30s or the high 20s, then you could foresee a situation where  Republicans could begin to think that Mike Pence is a much better alternative," he says.

Epstein cautions against impeachment, citing his own experience. "Impeachment is a little like war," he says.  "People tend to romanticize the idea of impeaching a president when the opposition party is in the White House. I have lived through an impeachment and it's an incredibly divisive fight that leaves wounds that sometimes takes years and years to heal," he says.