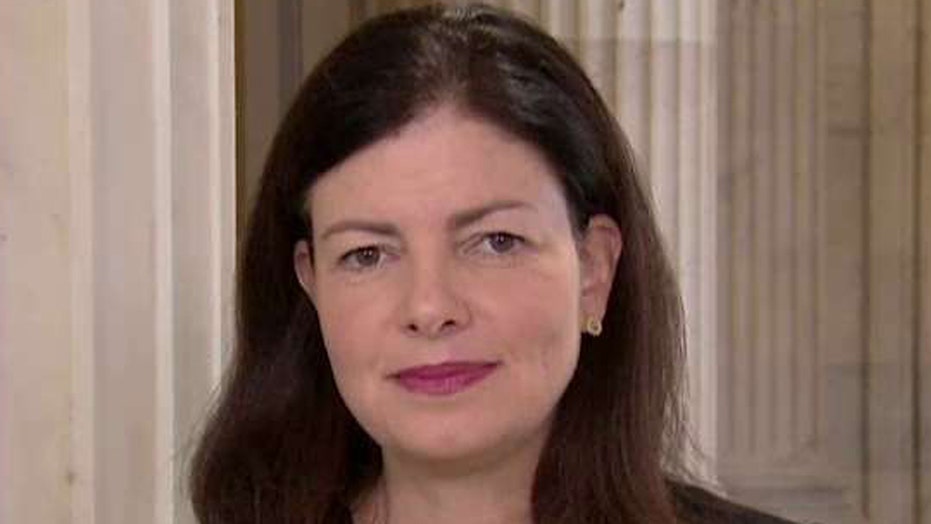 Sen. Ayotte: We need to have Guantanamo

Their major focus appears to be the Senate, considering they have to win a net total of four seats to retake control of the chamber, though the more outside chance of also flipping the House now seems more attainable.

Democrats will have plenty of soundbites and video clips of Trump talking about Muslims, women and other politically-sensitive issues in ways that party members will find offensive.

However, linking him and his remarks to vulnerable GOP incumbents right away will be more difficult, considering few have endorsed Trump -- the lone Republican presidential candidate after his commanding win Tuesday in Indiana forced out primary rivals Texas Sen. Ted Cruz and Ohio Gov. John Kasich.

“There’s no going back for vulnerable incumbents and candidates who’ve pledged to support Trump,” the Democratic Senatorial Campaign Committee said Wednesday. “Now they have the herculean task of explaining their own out-of-touch records while running alongside their party’s new standard bearer: a divisive and dangerous personality.”

All five have essentially said they would support the Republican nominee, without naming names or pledging an endorsement.

But the DSCC first turned its attention on Ayotte -- considering New Hampshire tilts Democratic in presidential years and polling shows Trump is deeply unpopular among New Hampshire voters, including the independents Ayotte desperately needs to support her.

“Ayotte would let the man who wants to ban Muslims from entering the country, called Mexican immigrants ‘rapists,’ and said women should be punished for having an abortion nominate someone to a lifetime appointment on the Supreme Court,” the group said Wednesday.

The first-term senator's race against challenger New Hampshire Democratic Gov. Maggie Hassan is a tossup, according to most political handicappers.

“While Democrat Senate candidates are all too eager to campaign on what they are against, Republicans will continue to lay out their visions to help our country recover from eight years of the Obama economy and get people back to work,” National Republican Senatorial Committee spokeswoman Alleigh Marre told FoxNews.com. “There is a reason Democrats aren’t lining up to campaign with Hillary Clinton. She is a toxic candidate whose failed leadership has put the security of our country at risk.”

Republicans need to win New Hampshire to keep their Senate majority but face long odds, considering they must defend 24 seats compared to 10 for Democrats.

And seven of the seats that the GOP must defend are in states President Obama won twice -- Florida and Iowa as well as the targeted Illinois, Ohio, New Hampshire, Pennsylvania, and Wisconsin.

While Washington Democrats have largely focused on those races, Trump this week becoming the lone GOP presidential candidate appears to have expanded their playing field to include North Carolina, where GOP Sen. Richard Burr is in a close re-election race for a third term.

“That Richard Burr is eagerly looking forward to working with Donald Trump proves he’s even more out of touch with North Carolinians than previously thought,” DSCC spokesperson Sam Lau said Friday. “If he continues to align himself with the party’s standard bearer, North Carolinians will look forward to working to retire Richard Burr this November.”

Senate Majority Leader Mitch McConnell has said only that he’s committed to supporting the nominee chosen by Republican voters and that Trump appears on the verge of clinching the nomination.

However, House Speaker Paul Ryan has said he cannot support Trump until he gets some assurance from the presumptive nominee and billionaire businessman that he’ll push for a conservative agenda.

Democrats would need to win roughly 30 seats in November to retake control of the lower chamber.

“Many House incumbents, especially in marginal districts, are worried about their chances with Trump at the top of the ticket,” Joe Desilet, a Republican strategist at the strategy firm 21st and Main, said Friday.  “We are already seeing a number of them, like Barbara Comstock in Virginia's 10th District, distancing themselves from Trump. But I'm not sold that Trump at the top of the ticket will sink our congressional majority.”