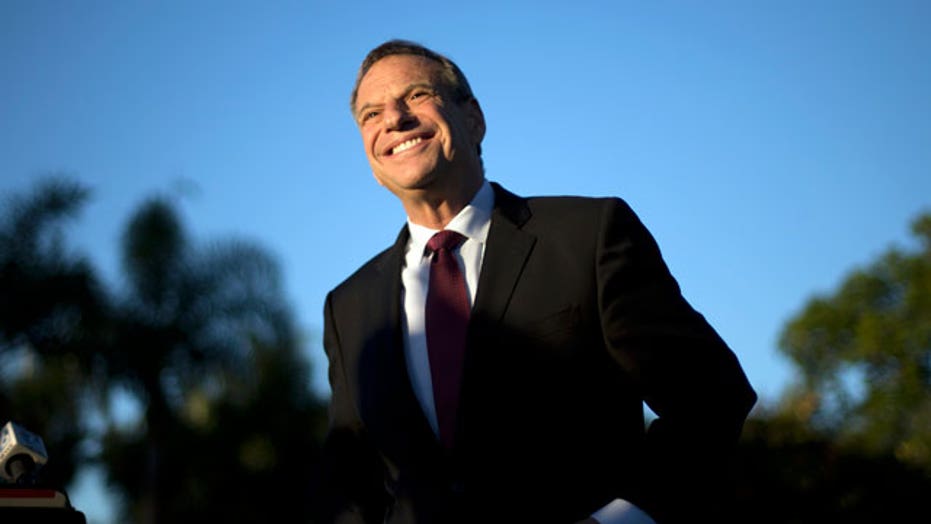 The head of the Democratic Party on Friday urged San Diego Mayor Bob Filner to resign, following allegations from four more women that they were targets of his sexual advances.

The statement from Debbie Wasserman Schultz, who was also Filner's former House colleague, adds a new level of pressure on the defiant mayor, who so far has resisted calls to resign. The mayor plans to make a statement on Friday afternoon, though his office gave no indication on what he's going to announce.

"The misconduct Mayor Bob Filner has been accused of is reprehensible and indefensible. I am personally offended by his actions and I firmly believe no employee should face a hostile environment or harassment at their place of employment," Wasserman Schultz said in a statement. "There is no place for this type of conduct in the workplace and certainly not in our city halls and public offices. For the good of the City of San Diego, I call on Mayor Filner to resign."

Four women, including a retired U.S. Navy admiral, publicly identified themselves Thursday as victim's of Filner's harassment. The latest accusers spoke with KPBS about inappropriate touching and comments and said they believe Filner is unfit for office and should resign immediately. Filner has said he has no intention to resign

The vote comes one week after the committee deadlocked 24-24 on the question. The earlier vote came before any woman had publicly identified herself.

The women who came forward Thursday are a retired Navy rear admiral, a dean at San Diego State University, the head of the San Diego Ports Tenants Association and a prominent businesswoman.

Veronica "Ronne" Froman, the retired rear-admiral and the city's chief operating officer under Filner's predecessor, told KPBS that Filner once blocked a doorway after others had left a meeting, ran his finger up her cheek and asked if she had a man in her life.

When she told him she did have a man, named Linden Blue, Filner allegedly replied, "Oh, of the Blues Brothers?"

"And he says, `Maybe we can get together some time and have lunch and he can support me for mayor."'

Froman said the incident happened "a couple years ago" at Filner's congressional office.

Sharon Bernie-Cloward, president of the San Diego Port Tenants Association, said the then-congressman approached at an event in 2010, said she was beautiful and that he wanted to date her after his re-election. At another event last year during the mayoral campaign, she said Filner "groped me on my backside inappropriately."

"I was left there startled and fearful. In fact, I actually had someone walk me to my car that night," she said.

Patti Roscoe, a businesswoman in San Diego's tourism and hospitality industry who has known Filner since before he was elected to Congress in 1992, said Filner placed her in a "headlock" numerous times and tried to kiss her on the lips.

"I'd have to squirm to get away. And just as recently as a few months ago this happened. I turned and he just slobbered down my chin," Roscoe said.

Joyce Gattas, dean of San Diego State's College of Professional Studies and Fine Arts, said she had a series of "interactions with Bob where he's held me too tight, a kiss on the cheek which is inappropriate, hands on the knee that last too long."

"I've experienced his sexual innuendos with me at various events that again, have left me in that strange feeling of `this is inappropriate, this is unwanted and this shouldn't be happening,"' Gattas said.

Filner refused to discuss the allegations when hounded by reporters at public appearances Thursday, before the latest accusers surfaced. He said the claims should be addressed through legal channels.

"Let's take a deep breath, let that process work itself out. Meanwhile, we got a city to run," he said.