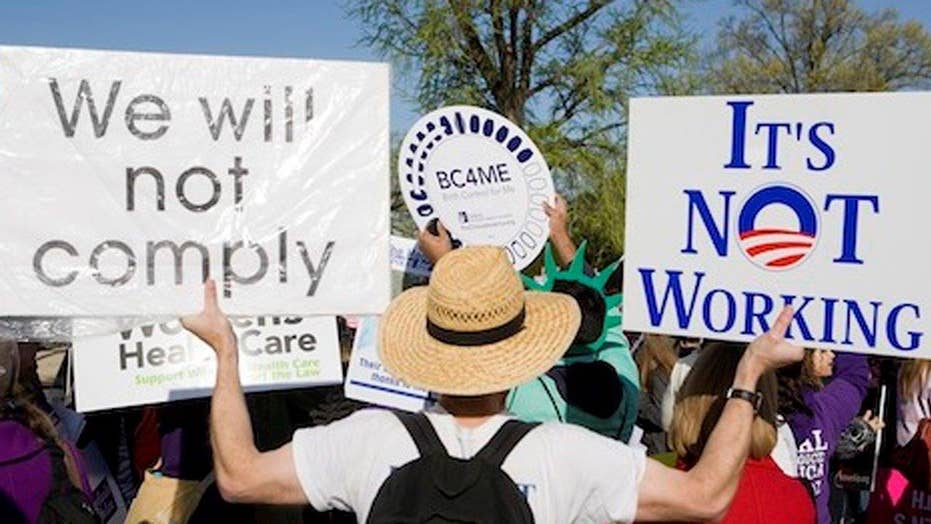 One economist says the government-run health insurer would help reduce costs; Rich Edson has the details for 'Special Report'

In the first year of President Obama’s administration, Congress overhauled the American health care system. Before his second term has ended, Democrats already are calling for significant changes to ObamaCare.

Democratic presidential nominee Hillary Clinton and more than two dozen Senate Democrats are now pushing the “public option” – the creation of government-run insurance entities designed to compete with private companies. It’s something liberals advocated for, unsuccessfully, during the original debate over the law. Conservatives say Democrats are only reviving the call now as a last resort, as major private insurers scale down their involvement considerably, up-front costs rise and doctor choices narrow.

“I think we're seeing the public option come back out of desperation,” said Douglas Holtz-Eakin, president of the conservative American Action Forum. “We’ve seen UnitedHealthcare groups, the Aetnas of the world withdraw from exchanges.”

Last month, Aetna announced it was withdrawing from 11 of the 15 states where it offers ObamaCare plans. The company said it made the decision “following a thorough business review and in light of a second-quarter pretax loss of $200 million and total pretax losses of more than $430 million since January 2014 in our individual products.”

“As a result, the kinds of people buying insurance there have very expensive medical bills -- insurers are losing money, as they try to cover those bills, jacking up the premiums, people move to other policies so it’s turning into the death spiral that everybody worried about,” said Holtz-Eakin.

ObamaCare has insured millions through Healthcare.gov – the website where those buying health insurance can shop for a plan offered by insurance companies. Based on income, the government can offer shoppers federal subsidies. Critics charge that even with subsidies to help customers pay, ObamaCare insurance plans are still too expensive, too few customers are signing up and the system is unsustainable.

“The reality is we had to pass this bill to watch its collapse in order for us to get to single-payer government health care,” said Jeffrey I. Barke, a doctor and supporter of Republican nominee Donald Trump. “That is the only thing that makes sense to me, with this ObamaCare demise death spiral that we’re currently seeing.”

Obama says Democrats’ efforts to change ObamaCare amount to improvements to a functioning system, and weeks ago published a column opening the door to the public option idea. “Policy makers should build on progress made by the Affordable Care Act by continuing to implement the Health Insurance Marketplaces and delivery system reform, increasing federal financial assistance for Marketplace enrollees, introducing a public plan option in areas lacking individual market competition, and taking actions to reduce prescription drug costs,” Obama wrote in the Journal of American Medicine.

Dr. Henry Aaron, a senior fellow of economic studies at the Brookings Institution, says the government should focus on regulatory changes, noting the Republican Congress opposes any public option plans. Aaron said he supports state insurance commissioners requiring insurance companies to sell all their individual plans on the ObamaCare exchanges to broaden the insurance pool, and ending special enrollment periods allowing customers to sign up for insurance once they find out they need health care.