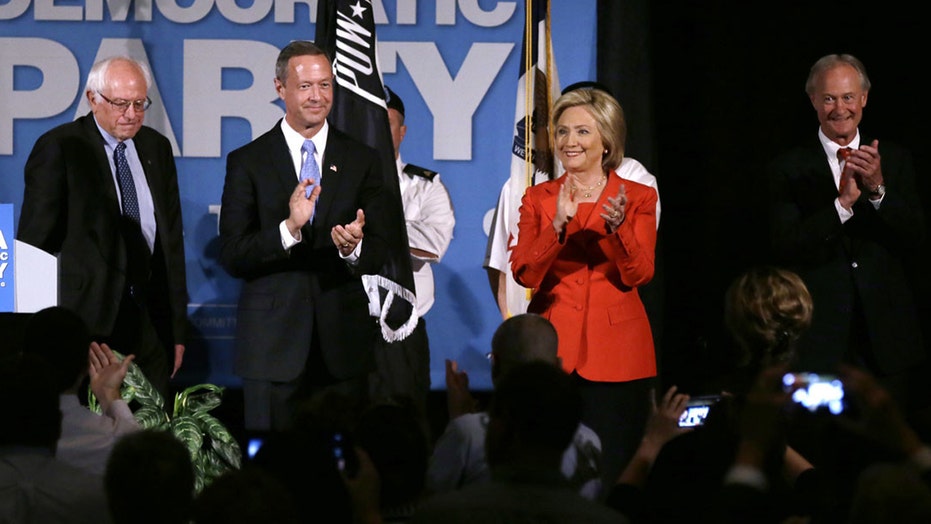 A defiant Hillary Clinton defended her policy flip-flops and downplayed her personal email scandal while sparring sharply with her primary rivals at the first Democratic presidential debate, where the front-runner played the role of nimble-footed goalie to a field taking shots at her long record in public life.

In comparison with the Donald Trump-dominated GOP debates, the lead-off showdown in Las Vegas Tuesday night was a relatively cordial affair for the Democrats, with the lively disputes centering on policy differences and not personal put-downs. But Clinton was the clear lightning rod, challenged early and often on her shifting positions – while also hitting back and trying to position herself as a practical progressive with every bit as much credibility with the base as candidates like Sen. Bernie Sanders.

“I’m not taking a backseat to anybody on my values, my principles and the results that I get,” Clinton said, describing herself as a “progressive who likes to get things done.”

The front-runner, who has faced an insurgent challenge from her left in Sanders’ campaign, was visibly ready to tangle Tuesday with him and the three other candidates on stage at the CNN-Facebook debate.

While Sanders railed against a “casino capitalist process,” Clinton warned against abandoning the system that built America’s middle class. And Clinton sparred with Sanders and others as they questioned her call for a no-fly zone in Syria, and criticized her 2002 support, as a senator, for use of force in Iraq, a decision she’s since called a mistake.

Former Rhode Island Sen. Lincoln Chafee called it a “poor decision” and said he did his “homework” when he opposed that measure.

Clinton, in her defense, noted that President Obama asked her to be secretary of state because “he valued my judgment.”

When former Maryland Gov. Martin O’Malley suggested lawmakers were overtaken by “war fever,” Clinton quipped: “I am in the middle here – lots of things coming from all directions.” She then tweaked O’Malley by thanking him for endorsing her in 2008.

Whether Clinton’s performance Tuesday night will help her recover slipping support in the polls remains to be seen, as Sanders draws big crowds and catches up to her in recent fundraising. The two Democrats each gave little ground at the debate – though the Vermont senator mostly avoided aggressively attacking Clinton on stage.

When Clinton was pressed on her personal email scandal, Sanders even jumped to her defense.

In one of the more memorable moments of the night, Sanders said: “I think the secretary is right. ... The American people are sick and tired of hearing about your damn emails.”

Clinton said, “Me too.” She thanked him and shook his hand.

Chafee, though, added that "credibility is an issue."

The exchange came after Clinton responded to a question on the email scandal by saying she’s taken responsibility for it and acknowledged it was a mistake.

She quickly pivoted to challenging the work of the congressional Benghazi committee, calling it “basically an arm of the Republican National Committee.”

The former secretary of state was also challenged on her policy flips by moderator Anderson Cooper, who asked if she will say anything to get elected.

“I’ve been very consistent over the course of my entire life,” Clinton responded. But she said “like most human beings,” she has absorbed new information.

Clinton was specifically challenged for opposing the Pacific-nation trade deal she once supported as secretary of state. Though she once called it the “gold standard,” she said Tuesday the deal “didn’t meet my standard.” She said she couldn’t tell voters it would raise their wages.

Clinton, though, tried to turn the tables on her rivals, and took a crack at Sanders’ record on gun control.

Asked if the Vermont senator is tough enough on gun violence, Clinton said, “No, not at all” and urged the country to stand up against the NRA.

She criticized him for voting for a 2005 bill giving gun manufacturers immunity from lawsuits. After Sanders described that bill as complicated, she said, “It wasn’t that complicated to me.”

Sanders responded, “All the shouting in the world” is not going to end the violence. He said the country needs to reach a consensus, and stressed that rural states view gun laws differently than other states.

The Democratic presidential candidates otherwise tried to focus their message on the economy and lifting the middle class.

Sanders drew some of the loudest applause from the audience, as he called for reviving a “disappearing” middle class. He blasted the Citizens United campaign finance decision which he said is letting millionaires and billionaires fund candidates who only look out for them.

Clinton said, “At the center of my campaign is how we’re going to raise wages.”

Throughout the debate, former Virginia Sen. Jim Webb, the fifth candidate on stage, struggled to elbow his way into the conversation. He stressed his military experience and push for criminal justice reform and other issues while in the Senate.

Toward the end of the debate, Webb challenged Sanders for his big-spending proposals

“Bernie, I don’t think the revolution’s gonna come,” he said, adding he doesn’t think Congress would pay for a lot of his plans.

Webb, Chafee and O’Malley are all averaging at or below 1 percent in the polls nationally, according to RealClearPolitics. So far, it is Sanders who poses the biggest challenge to Clinton in the polls.

Clinton faced a dual task, though, Tuesday night – to not only outperform primary rivals cutting into her lead but keep her biggest potential challenger, Vice President Biden, on the sidelines.

Biden still is mulling a bid and did not make Tuesday’s showdown. According to a White House official, Biden planned to watch the debate at the Naval Observatory residence.

While Clinton remains the front-runner, a new Fox News poll underscored her potential vulnerability in a general election – and showed Biden faring better than her against would-be GOP rivals.

In hypothetical 2016 matchups, Clinton trailed all the Republicans tested, including Ben Carson by 11 points and Donald Trump by 5 points. By comparison, Biden was leading Trump by 13 points and Carson by 4 points.

The poll was based on interviews with 1,004 registered voters nationwide. The poll had a margin of error of 4 percentage points for the head-to-head match-ups. 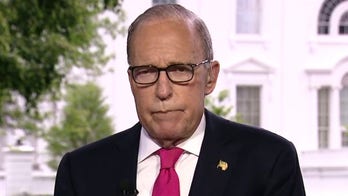