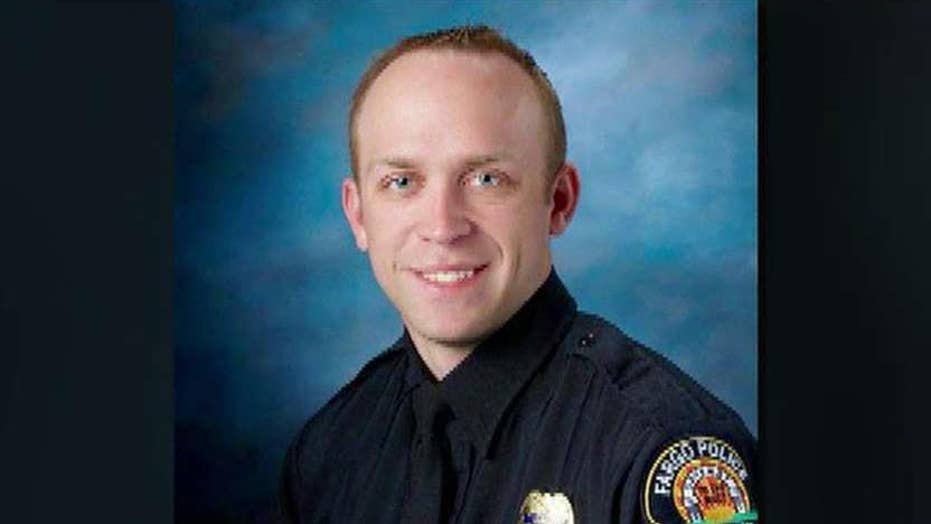 A Fargo police officer fatally shot responding to a routine domestic disturbance call. A 25-year police veteran killed while trying to serve a warrant outside Atlanta. These are just the latest tragedies of cops murdered while performing their sworn duty -- "to protect and serve."

But while President Obama and the Democratic candidates vying to succeed him are putting America's police departments on trial in the court of public opinion in response to a rash of deadly police shootings, the murder of police officers on America's streets is being met with a “deafening silence.”

“I cannot recall any time in recent years when six law enforcement professionals have been murdered by gunfire in multiple incidents in a single week,” National Law Enforcement Officers Memorial Fund CEO Craig W. Floyd said in a statement Friday. “Already this year there have been eight officers shot and killed, compared to just one during the same period last year and represents a very troubling trend."

This, amid a rash of violence against police across the country. Jason Moszer, the police officer in Fargo, N.D., was shot during a standoff with a domestic violence suspect Wednesday and died from his injuries the next day. Police Maj. Greg Barney, separately, was shot dead at an apartment complex outside Atlanta, Ga.

So far in 2016, eight officers have been shot to death, with most of those deaths occurring in the past week, way up from this time last year.

Violence against police peaked in 2011 with 72 officers killed as a result of felonious incidents, the highest since 1994. It dropped to 27 deaths in 2013, but nearly doubled to 51 officers killed in 2014.

Law Enforcement Officers Killed in the Line of Duty | FindTheData

After two Maryland sheriff’s deputies were fatally shot earlier this week, Attorney General Loretta Lynch did meet with officials from the Major County Sheriff’s Association at their winter meeting in Washington.  She said in a statement she was “deeply saddened” by the tragedy, calling it an “appalling and senseless crime, carried out against two dedicated guardians of the public.”

But on the campaign trail, anti-police violence is essentially a non-issue, even as candidates are quick to speak out on the alleged mistreatment of civilians at the hands of cops -- often before the facts of the situation are fully known.

Sheriff Paul Babeu of Pinal County, Ariz, told FoxNews.com the recent trend can be traced to Obama’s premature comments about the 2009 arrest of Professor Henry Louis Gates, who was briefly arrested after trying to break into his own house after losing his keys. Though the more complex aspects of the case were not yet known, Obama said “the police ... acted stupidly” and pointed to past discriminations against blacks and Latinos by police.

“That’s his lens on how he sees our heroes and our protectors,” Babeu, who is also a Republican congressional candidate, said. “That’s who he is and Clinton is lockstep in with him.”

“There is an absolute deafening silence from the leaders of our country [on anti-police violence], and it tells us where we are at this time in our society,” he said.

The choice of emphasis for the two 2016 presidential hopefuls can perhaps be tied to their bid to woo a more diverse electorate in Nevada and South Carolina.

Clinton has ramped up rhetoric protesting police brutality in recent weeks, and she used strong language in her speech in New Hampshire after Tuesday’s primary.

“We still have to break through the barriers of bigotry. African American parents shouldn’t have to worry about their children being harassed, humiliated and even shot for the color of their skin,” she said.

Sanders, who has been struggling to grow his appeal among black Democrats, has also jumped on the issue. Notably in August, when asked about the execution of a Texas police officer, Sanders called it “an outrage” but quickly pivoted to anti-black violence by cops.

“On the other hand, what we also have to understand, it is not acceptable in this country when unarmed black people get dragged out of cars or get shot,” Sanders said, although he did not specify an incident.

The Democratic candidates also have been careful in addressing these issues as they interact with members of the Black Lives Matter movement. In July, then-candidate Martin O’Malley was forced to apologize after telling protesters at a Netroots conference “All lives matter.” The seemingly benign statement caused booing from the audience; O’Malley apologized and went on to say “black lives matter” a number of times at Democratic debates. He never repeated the term “all lives matter.”

Sanders had a run in with BLM activists as well, when in August he had activists steal his microphone, as he was forced to stand to one side as they listed their demands and made a statement.

On the Republican side, candidates are speaking more about violence against police. Front-runner Donald Trump has called the police the “most mistreated” people in America.