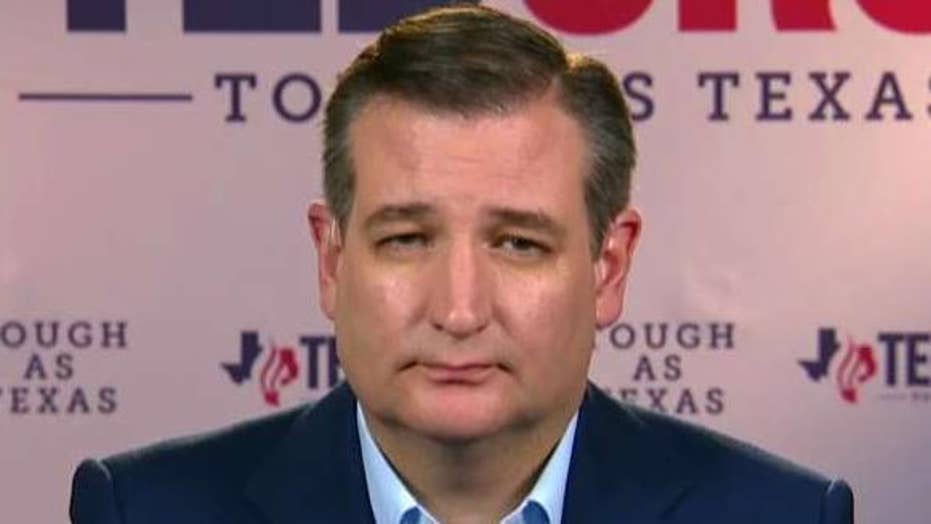 On 'The Ingraham Angle,' Republican senator from Texas fires back at his opponent.

Sen. Ted Cruz tried to assuage voters’ concerns about his relationship with President Trump on Sunday amid a heated re-election campaign in the Lone Star state.

During an appearance on ABC News’ “This Week,” Cruz, R-Texas, said that while there were “hard shots” taken by both the president and himself during the 2016 Republican primary season, he has put the harsh words between them behind him in favor of focusing on issues important to Texans.

“I could have not worked with the president if I put my feelings ahead of Texas,” Cruz said. “That wouldn’t be my responsibility.”

Cruz added: “He’s the president…I work with him in delivering on our promises.”

Cruz is running in a tight race against Beto O’Rourke, a Democratic congressman from El Paso who has galvanized national liberal circles as he tries to become Texas' first Democrat to win statewide office since 1994. But polls that once showed him staying close to Cruz now have the incumbent leading by nine points — the same margin by which Trump carried the state in 2016.

Despite being bitter enemies during the 2016 election, Cruz, 47, has embraced President Trump in his re-election campaign. In turn, the president recently said he will hold “a major rally” in support of Cruz on Monday.

The president tweeted Friday, "Beto O'Rourke is a total lightweight compared to Ted Cruz, and he comes nowhere near representing the values and desires" of Texans. Trump added: "He will never be allowed to turn Texas into Venezuela!"

That came two days removed from the president tweeting that O'Rourke was a "flake" after the Democrat used a debate to borrow a Trump nickname for Cruz while both were bitter rivals during the 2016 Republican presidential primary, "Lyin' Ted."

His going negative was viewed as O'Rourke as trying to make up ground with Election Day looming, but O'Rourke said borrowing from Trump's playbook was "not something that I feel totally comfortable with."

"In the heat of the moment, perhaps I took a step too far," he said.

O'Rourke said on Thursday during a town hall that he'd vote to impeach Trump and believes Texas can lead the way to a national embracing of relaxed immigration policies and gun control — unapologetically liberal positions that may be hard for some in his deep-red state to stomach.

O'Rourke raised a whopping $38-plus million during the three-month period ending in September alone, but said Thursday he doesn't plan to share his war chest with Democrats around the state or country, saying, "I want to make sure we spare no expense."

Despite that, there's been speculation O'Rourke could use a win, or even a close loss, to run for president in 2020. But when asked by a member of the audience, O'Rourke said "the answer is no," adding that he wants to spend more time with his wife and three kids — not campaigning.