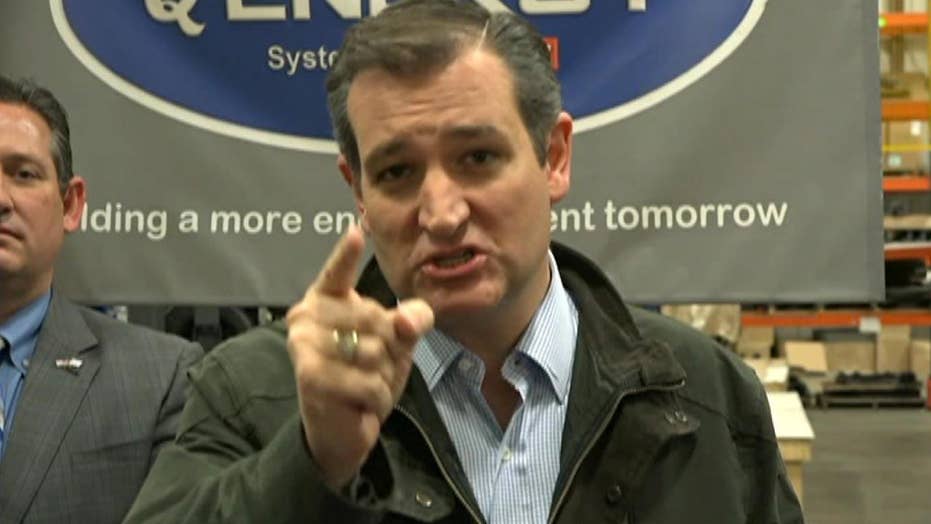 The war of words between Donald Trump and Ted Cruz heated up Thursday as Cruz called Trump a “sniveling coward” after the billionaire tweeted an attack on the Texas senator’s wife.

“I don’t get angry often, but you mess with my wife,you mess with my kids, that’ll do it everytime.” Cruz said at a Wisconsin factory. “Donald, you’re a sniveling coward, leave Heidi the hell alone.”

The fiery reaction from Cruz comes after Trump retweeted an image late Wednesday from a supporter which contrasted a picture of Trump’s wife Melania alongside an unflattering image of Cruz’s wife Heidi, with the caption “a picture is worth a thousand words.”

When asked if he would support Trump if he became the nominee, Cruz said “I’m going to beat him for the nomination…Donald Trump is not going to be the nominee.”

The latest spat over their wives came after Trump objected this week to a Facebook ad targeted to Mormons in Utah that showed Melania posing nude with the caption: “Meet Melania Trump, your next first lady. Or you could vote for Ted Cruz on Tuesday.”

Although the ad was produced by anti-Trump Super PAC “Make America Awesome,” which has no connection to the Cruz campaign, the real estate mogul responded by tweeting Tuesday that Cruz should “be careful” or he would “spill the beans on your wife.”

Cruz responded on Twitter by saying that the ad was not from him and if he went after his wife, then Trump is a "coward."

"Pic of your wife not from us. Donald, if you try to attack Heidi, you're more of a coward than I thought. #classless," Cruz tweeted.

On Wednesday, Cruz reiterated he had no affiliation with the super PAC but added that Trump’s bad behavior may have been the result of a “bad night in Utah.”