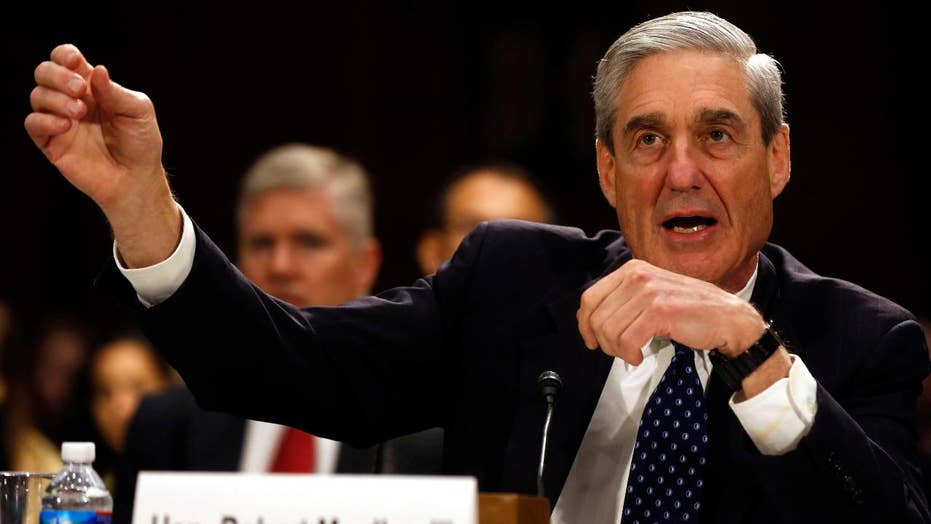 Rep. Ron DeSantis, (R-Fla.), on the farm bill, the Mueller investigation and the Iran nuclear deal.

Special Counsel Robert Mueller's Russia probe, in the span of just a few days, has been hit with new questions surrounding investigators' case against their two highest-profile targets to date – a situation that threatens to disrupt the team’s momentum ahead of what could be a crucial bid to interview President Trump.

One complication already has handed the president and his allies rhetorical fodder to tar the probe as politically motivated, and begin making a public case for avoiding an interview. On Friday, a federal judge challenged Mueller's team for using material from an earlier investigation to go after ex-campaign chairman Paul Manafort, accusing them of merely trying to pressure him to give up damaging information on Trump.

“You're now using [that material] … as a means of persuading Mr. Manafort to provide information,” U.S. District Judge T.S. Ellis III said in court Friday. He suggested they want to make Manafort “sing” and only care about dirt that would lead to Trump’s “prosecution or impeachment or whatever.”

It's unclear whether the judge was merely trying to extract key documents relating to the probe's scope or whether his heated questioning poses a bigger threat. He did not make a decision on the request from Manafort’s team to dismiss the bank fraud and other charges. But Trump gleefully seized on the Reagan-appointed judge's harsh comments during his red-meat speech to an NRA convention Friday – and seemed to reference them in a tweet Monday morning.

“The 13 Angry Democrats in charge of the Russian Witch Hunt are starting to find out that there is a Court System in place that actually protects people from injustice...and just wait ‘till the Courts get to see your unrevealed Conflicts of Interest!” he tweeted.

Trump soon added, “Is this Phony Witch Hunt going to go on even longer so it wrongfully impacts the Mid-Term Elections, which is what the Democrats always intended? Republicans better get tough and smart before it is too late!”

Lanny Davis, former special counsel to ex-President Bill Clinton, told “Fox News Sunday” that Manafort’s attorneys “have a point that there is a limit to what an independent counsel [can pursue].”

“I don't know whether that line has been crossed. I certainly think there's a question to be raised about what bank fraud has to do with Russian collusion, and that's something that needs to be addressed by the court,” Davis said.

It shows that despite Flynn pleading guilty to making false statements to the FBI about his contacts with Russia’s former ambassador, then-FBI Director James Comey told the committee that agents who interviewed Flynn “discerned no physical indications of deception.”

“They saw nothing that indicated to them that he knew he was lying to them,” Comey said, according to the GOP-authored report.

The development is puzzling because, as McCabe’s testimony reflects, Flynn’s comments were indeed at odds with the evidence. The FBI reportedly intercepted conversations that countered Flynn’s initial claim that, among other things, he did not ask Russia’s ambassador to refrain from escalating the situation in response to sanctions.

But Comey and McCabe’s statements raise the possibility that Flynn may not have knowingly lied – despite his plea.

Curiously, Mueller’s team has sought multiple delays in Flynn’s sentencing. And Comey, before the unredacted segments from the Russia report were released, told Fox News’ Bret Baier that he did not say FBI agents had doubts about Flynn lying.

On top of the Flynn and Manafort developments, Politico reported Friday that another judge denied Mueller’s request to delay the first hearing in a sweeping case against Russian companies and citizens – a case that, unlike some other charges, goes to the heart of allegations of Russian meddling in the 2016 election. Lawyers who surfaced to represent one of the defendants reportedly sought private details about the case.

Further, The Wall Street Journal reports that Mueller may soon have to “wrap up or lie low” with his investigation so as not to give the impression of any attempt to tilt the midterm elections.

Amid all these developments is perhaps the most consequential question of the entire probe – whether Trump will agree to an interview with Mueller’s team.

One of his newest lawyers, Rudy Giuliani, who has caused headaches for the Trump team with his comments on the separate Michael Cohen probe, suggested Sunday on ABC News’ “This Week” that they could rebuff Mueller in the end.

“We can assert the same privilege as other presidents have,” Giuliani said.

The special counsel's office declined to comment Monday on the latest developments surrounding Flynn and Manafort.