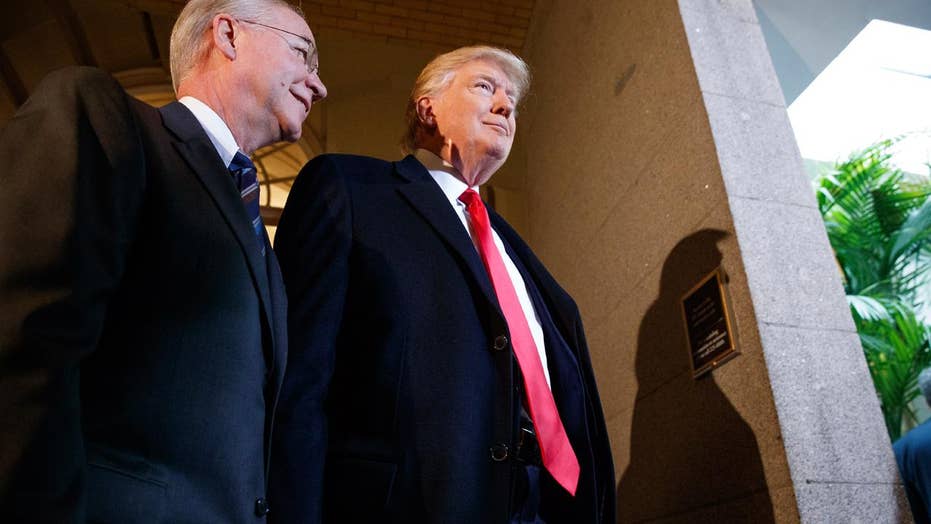 Will Trump's final pitch on a health care deal work?

President Trump flashed the thumbs-up Tuesday on Capitol Hill, where he pressured House Republicans to pass an ObamaCare replacement bill -- but despite White House optimism about a deal coming together, conservative members later said they’re still voting no and could derail the chamber vote set for Thursday.

Meadows said 21 of the influential caucus’ 30-plus members still intend to vote against the bill, crafted by House Speaker Paul Ryan, R-Wis., and his leadership team.

Trump repeatedly has tried since the bill was introduced several weeks ago to win over Meadows -- from inviting him to the White House and his Mar-a-Lago Florida resort last weekend to calling him out Tuesday in a closed-door meeting.

“Oh Mark, I'm going to come after you,” Trump told Meadows to laughter, according to several reports.

The White House and Meadows later downplayed the comment, with the congressman saying he and the president have a good relationship and that he also got a visit Tuesday from Vice President Mike Pence.

Still, those who attended the roughly 40-minute, closed-door meeting thought Trump was dead serious when he said many House Republicans got elected on a vow to repeal and replace ObamaCare and they could lose re-election in 2018 if they don’t fulfill the promise.

Trump’s blunt warning signaled his and Ryan’s escalating efforts to get the requisite 218 votes to pass the legislation in the GOP-led chamber, then send it to the GOP-led Senate.

Late Monday, Ryan and his team announced changes to their bill, the American Health Care Act, to shore up support from the GOP's rank-and-file, including moderates, and with voters who now rely on ObamaCare.

The change, in a 43-page manager's amendment, would pave the way for the Senate, if it chooses, to make the bill's tax credits more generous for people ages 50 to 65, so they could better afford the insurance. The bill reportedly sets aside $85 billion over 10 years for that purpose.

The measure also would curb Medicaid growth and allow states to impose work requirements on some recipients.

Ryan said Monday the amendment was the result of an "inclusive approach" involving the White House and congressional Republicans.

But even if the bill clears the House, it faces problems in the Senate.

He said they “do little to address the core problem of ObamaCare: rising premiums and deductibles, which are making insurance unaffordable for too many Arkansans.”

Still, the replacement plan has no Democratic support.

Meadows indicated Monday that his group will not oppose or support the bill collectively, so members can vote on their own.

“This bill doesn't do what we told the American people we were going to do,” he said.

Meadows brushed aside concerns about losing in a GOP primary next year.

“I serve at the will of 750,000 people in western North Carolina. I’m going to be a no even if it sends me home,” he said. “I don’t know of too many people who can challenge me on the right.”

Despite giving the thumbs-up before the Capitol Hill meeting, Trump appeared to leave with just cautious optimism, saying negotiations continue and “I think we'll get the vote Thursday."

The president will apparently continue to meet with House Republicans until the vote deadline, which includes talking with the moderate Tuesday Group and attending a National Republican Congressional Committee dinner.

New Jersey GOP Rep. Tom MacArthur a Tuesday Group member who supports the bill, said after the White House meeting that most of the 12 other members also seem to be supportive but still have concerns.