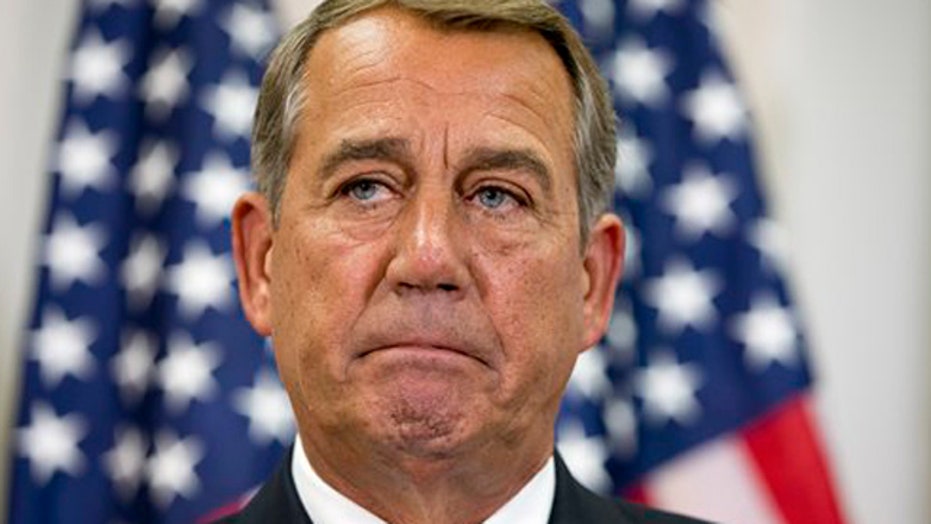 "Welcome back," House Minority Whip Steny Hoyer, D-Md., declared this week as he met with reporters.

Lawmakers had just jetted back to Washington after the lengthy summer recess. Hoyer noted one of his press aides likened the return to "going back to school."

Asked "what if we don't like the teacher this year," Hoyer deadpanned: "Well, get a new teacher."

Turns out a bloc of House conservatives may have taken Hoyer's counsel to heart. With school -- rather, Congress -- back in session, some conservatives want to remove House Speaker John Boehner from power.

The right already claimed the political scalp of then-House Majority Leader Eric Cantor, R-Va., last year. And they've made a run at Boehner before. Just before the August recess, Rep. Mark Meadows, R-N.C., championed a resolution to force a parliamentary-style "no-confidence" vote on the speaker.

There is an increasing belief from lawmakers and aides -- including those close to Boehner -- that conservatives may attempt to dethrone the Ohio Republican this fall. Among those seeking Boehner's ouster is Rep. Ted Yoho, R-Fla., a longtime detractor of the sitting speaker.

Already, the caucus is restive. There are upcoming altercations over avoiding a government shutdown, defunding Planned Parenthood and raising the debt ceiling. Those clashes are divisive. But few saw internal strife over the one thing on which Republicans were united: rejecting the nuclear accord.

On Wednesday morning, Republicans met for the first time in weeks for a GOP Conference meeting. Rank-and-file members expressed concern over the path the Republican leadership laid out in July on the Iran deal: the House and Senate would vote to "disapprove" of the agreement, begging President Obama for a veto. The true effort to kill the deal would lie in overriding the veto.

It never got to that. Reps. Pete Roskam, R-Ill., and Mike Pompeo, R-Kan. -- two Republicans far from the GOP fringe -- raised reservations about the Iran strategy, and everything changed.

Pompeo says, during a July visit to Vienna, he learned of Iranian "side agreements" that Congress had never seen. And while Congress earlier agreed that lawmakers would be "on the clock" to consider the deal within two months as soon as the Obama administration transmitted the deal's particulars to Capitol Hill in July, Roskam argued that the "trigger" hasn't actually started -- because of those side deals.

"The president has broken the law," Pompeo charged.

The contretemps caught GOP congressional leaders off-guard. Spurning the Iran deal was supposed to be a fait accompli. Instead, the GOP leadership is now taking a different approach to the deal and considering several separate bills -- and the dustup crystallized the depth of the challenge Boehner faces leading House Republicans.

Boehner dismissed suggestions that those who disagree with his leadership create headaches.

"It does not make it more difficult. I've got widespread support in the [Republican] Conference and I appreciate that," Boehner said before the Iran strategy change.

That's true. No one sees a successful path to pry away Boehner's gavel even if some conservatives force a vote.

"What are we going to do?" Rules Committee Chairman Pete Sessions, R-Texas, rhetorically asked. "Have 170 Democrats vote against John Boehner and 14 or 25 Republicans vote against and replace him? I don't think that's the correct methodology."

A successful vote to certify the speaker's chair vacant requires 218 yeas. And some Republicans hailed Boehner's decision to try a different Iran strategy.

"The leadership of this body was open and gracious to other solutions," said Roskam.

Boehner scored another cheer during a late-afternoon conference meeting on Iran when he informed lawmakers a federal judge decided that the courts could entertain parts of the House's lawsuit against President Obama over his health care law.

But the Iran change of heart didn't mollify all.

"It's two times in a row now I haven't voted for him for speaker. So that speaks for itself," said Rep. Louie Gohmert, R-Texas.

That narrative wears thin on Boehner ally Rep. Steve Stivers, R-Ohio. "We shouldn't force our leaders to look around behind their back every minute of the day," Stivers said.

Stivers says he's confident Boehner would prevail in a hypothetical vote to oust him.

"I think he has a stronger hand now than in January," said Stivers of this past winter's narrow vote to re-elect Boehner as speaker. "Some people who voted no will vote for [him] this time."

So the House will now try to advance a completely different set of measures on Iran -- imploding the original scenario to force a veto fight with Obama.

Rep. Jim Bridenstine R-Okla., was circumspect about the new game plan as a clutch of reporters pursued him after the GOP Conference meeting.

"There's a long time between today and tomorrow," Bridenstine replied when asked if the new Iran plan would work.

That's what worries GOP leaders as the House races toward other major battles this fall. After all, the Republican leadership thought everyone agreed Tuesday with their bill to reject the Iran accord -- until they didn't.