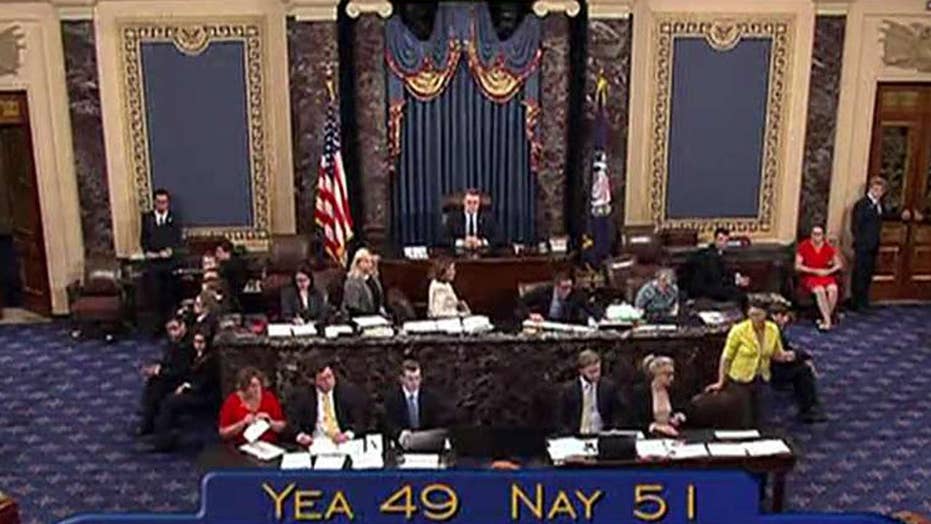 What's behind the failure of the 'skinny' ObamaCare repeal?

Conservative lawmakers still are holding out hope that Congress can strike a deal to repeal ObamaCare after the latest plan failed in the Senate, as Republican leaders signal they are ready to move on and focus on tax reform.

Speaking on the floor after the vote, McConnell lamented its failure and called it “a disappointing moment.”

MCCAIN, PLAYING THE MAVERICK, VOTES NO ON REPEAL

Across the Capitol, House Speaker Paul Ryan said Friday he was “disappointed and frustrated” and encouraged the Senate to keep working toward health care. But he said the House will focus on other issues.

“At the top of that list is cutting taxes for middle class families and fixing our broken tax code,” he said.

'I'm optimistic we can still get it done.'

During a speech Friday in Brentwood, N.Y., President Trump said: “They should have approved health care last night, but you can't have everything."

McCain, whose vote sank the Republican bill, spoke to Fox News as he and his wife, Cindy, left the Russell Senate Office Building in the rain on Friday afternoon.

“You always have concerns about an important vote like that,” he said.

The Arizona senator, who was recently diagnosed with brain cancer, rushed back to Washington this week to help Republicans pass a procedural hurdle to consider the bill. But he opposed the repeal measure itself, saying he has concerns with the quick process in which it was considered.

McCain said in a Friday statement he wants to see the Senate “start fresh” on health care and return to “regular order,” where both parties work together to craft legislation.

“I encourage my colleagues on both sides of the aisle to trust each other, stop the political gamesmanship, and put the health care needs of the American people first,” McCain said. “We can do this.”

Meanwhile, House conservatives on Friday encouraged Republicans not to let up on their plans for a repeal of the health care law just yet.

House Freedom Caucus Chairman Mark Meadows said Republicans need to keep working a “perfect bill” that they could consider “in a couple weeks.”

“I'm optimistic we can still get it done,” Meadows, a North Carolina Republican, said on “Fox & Friends” Friday. “People are losing faith but we’re going to stay in.”

The House passed its own version repealing and replacing the law in May. But Ohio Rep. Jim Jordan, another conservative member of the House Freedom Caucus, suggested on “Fox & Friends” that the House also pass a “clean repeal” bill like the one the Senate considered.

“That may give more pressure and motivation for the Senate to do the right thing and come together,” he said.

After the failed vote, Trump took aim at lawmakers, like McCain, who voted against the bill.

“3 Republicans and 48 Democrats let the American people down,” the president tweeted.

The president on Friday also called for the Senate to do away with the legislative filibuster and make it so all legislation could pass with 51 votes.

The Senate's latest health care bill still would not have passed, though, as it failed 51-49. The bill also was considered under special rules that required only a simple majority, and not 60 votes, to advance.

“If Republicans are going to pass great future legislation in the Senate, they must immediately go to a 51 vote majority, not senseless 60...,” Trump tweeted.