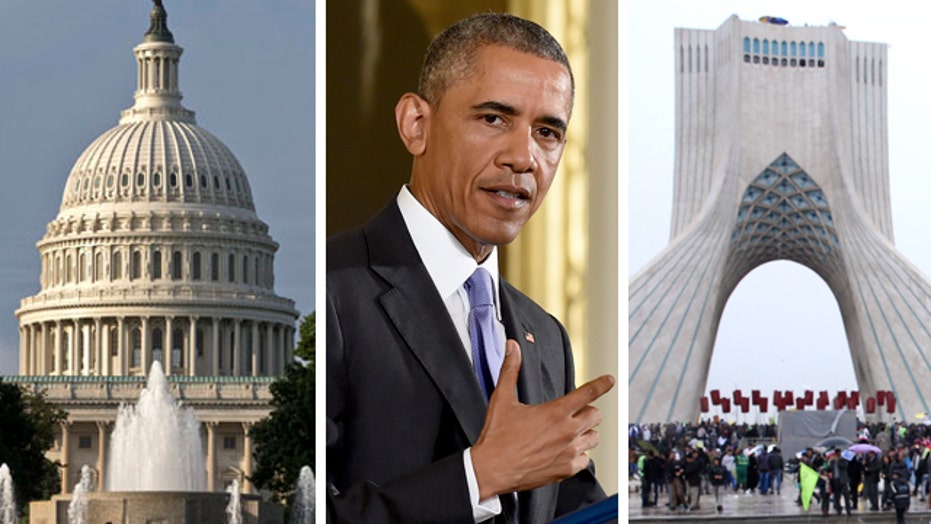 Is Obama administration trying to skirt Congress on Iran?

A top Senate Democrat said Sunday he will decide whether to approve the Iran nuclear deal based on “the best interest of the county,” not on his allegiance to President Obama or the entire party.

“It’s not a matter of what party I belong to,” Maryland Sen. Ben Cardin, the top Democrat on the Senate Foreign Relations Committee, told “Fox News Sunday.” “It's not a matter of supporting the president. The question is: What's in the best interest of this country?”

Congress has 60 days to approve the deal in which Iran agrees to curtail its nuclear program in exchange for the lifting of billions of dollars in sanctions.

There has been widespread concern about the deal since it was signed last week by Iran, the United States and five other world powers, including its provision to lift an arms embargo, if it includes enough authority to inspect nuclear-related sites and whether Israel is protected enough.

The GOP-led Senate will likely have enough votes to disapprove of the deal, based on strong and early opposition. However, Senate Republicans will need support from about 13 Senate Democrats to get the 67 votes needed to override President Obama’s almost certain veto of a disapproval resolution. Roughly 15 Democratic senators appear skeptical of the deal.

The Republican-control House would also need Democratic support for an override.

Cardin’s committee is expected to hold at least three public hearings on the issue before a projected September vote, starting Thursday when Secretary of State John Kerry, Energy Secretary Ernest Moniz and Treasury Secretary Jack Lew are scheduled to testify.

“There is bipartisan skepticism” about the deal, Wyoming Sen. John Barrasso, chairman of the Senate Republican Policy Committee, told Fox News on Sunday.

Arkansas GOP Sen. Tom Cotton, an Iraq and Afghanistan war veteran, told NBC’s “Meet the Press” that he agrees with Cardin and House Minority Whip Steny Hoyer, D-Md., that the administration shouldn’t take the deal to the United Nations before Congress decides.

However, he said the more important issue is the $150 billion in sanction relief and what Iran might do next.

“Iran is a terror-sponsoring, anti-American outlaw regime,” Cotton said. “And if you think Iran is going to change their behavior in a decade, I can tell you how unlikely that is because just nine years ago, they were trying to kill me and my soldiers.”

California Sen. Dianne Feinstein, the top Democrat on the Senate Foreign Intelligence Committee, told CBS’ “Face the Nation” that she hopes fellow congressional Democrats will support Obama’s nuclear deal but “the jury is out.”

“I certainly hope so,” she said. “I believe it's our one opportunity. You can't ignore the fact that you have Russia, China, the United Kingdom, France and Germany all aligned. …  It is very likely that, regardless of what we do, these nations will drop their sanctions at some point.”