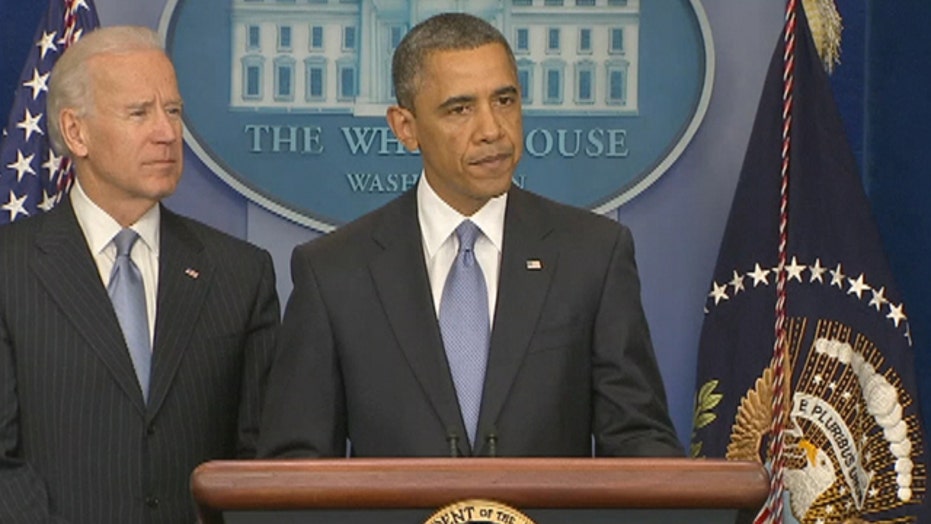 Obama: We can't cut our way to prosperity

Congress gave its final approval Tuesday to a bill halting massive tax hikes and delaying a risky round of spending cuts, sending the package to the president’s desk and likely averting for now an economy-stalling fiscal crisis. President Obama said he would sign it.

The 257-167 vote in the House came after a day of high drama on Capitol Hill, during which conservative House lawmakers voiced serious concern about the Senate bill’s lack of spending cuts. Rank-and-file Republicans initially predicted they would tinker with the package, raising the possibility the Senate would abandon it and nothing would get done before the new congressional class is seated Thursday.

But House leaders soon learned they did not have a majority behind any spending-cut plan, and allowed the straight vote. Far more Democrats supported the final bill than Republicans.

The result, once Obama signs it, is that tax hikes that technically kicked in Jan. 1 for most Americans would largely be halted.

Obama, speaking at the White House shortly before midnight, thanked Vice President Biden for his role in negotiating with the Senate a day earlier on the compromise package. The president, as did Republicans on the Hill, cautioned that the bill will precede a broader debate in 2013 about deficit reduction.

“This law is just one step in the broader effort to strengthen our economy and broaden opportunity for everybody,” Obama said – while appealing to Congress not to use a looming vote over the debt ceiling as leverage in that debate.

House Speaker John Boehner said shortly after the vote that Congress must now turn its attention to spending.

"The American people re-elected a Republican majority in the House, and we will use it in 2013 to hold the president accountable for the `balanced' approach he promised, meaning significant spending cuts and reforms to the entitlement programs that are driving our country deeper and deeper into debt," he said.

The bill passed by Congress would nix the 2013 tax increases for families making under $450,000, while letting rates rise for those making above that threshold. It would also extend unemployment insurance for another year, while patching up a host of other expiring provisions and delaying automatic spending cuts for two months. Those cuts, which would hit defense heavily, will instead be offset with a blend of tax increases and other spending cuts.

Americans will still see a 2-point increase this month in their Social Security tax, as Congress did not opt to extend that payroll tax holiday.

The final vote in the House put Boehner in a tricky position. The tally showed twice as many Democrats supporting the bill as Republicans – with 172 Democrats in favor, compared with 85 Republicans. It was enough to pass it, but ran afoul of the time-honored practice of passing bills that most members of the majority party support. While Boehner and former Republican vice presidential nominee Paul Ryan, R-Wis., voted for the bill, some of Boehner’s top deputies – notably Republican Leader Eric Cantor, R-Va., and Whip Kevin McCarthy, R-Calif. – opposed it. Boehner is facing a vote to retain his speakership in a matter of days.

The House was able to shoehorn in the vote before the markets open Wednesday. Uncertainty about a deal threatened to wreak havoc on Wall Street. And economists warned that any prolonged stalemate into 2013 threatened to pull the broader economy back into a recession. In total, more than $600 billion in tax hikes and spending cuts were set to take effect this year.

The vote Tuesday came amid rising pressure from House Democrats and the Senate side, which approved the bill early Tuesday morning. Democrats made clear that they would pin the blame squarely on House Republicans if the tax hikes were not averted.

“This is the House’s wisdom in making the best of a bad situation,” one House GOP leadership aide told Fox News. “We had a bad hand from the start, but we’re avoiding being blamed for taking us off the cliff.”

Still, a number of House Republicans came out against the package, including Cantor.

But other Republicans, while voicing opposition to the bill, acknowledged that it could pass the House.

Congress already missed the New Year’s Eve deadline for action, which technically triggered tax hikes. Without a resolution soon, taxes would have jumped by $2,400 on average for families with incomes of $50,000 to $75,000, according to a study by the nonpartisan Tax Policy Center. And because consumers would get less of their paychecks to spend, businesses and jobs would suffer as well.

House conservatives had begun voicing frustration Monday night about the lopsided ratio of tax increases in the plan, as compared with net spending cuts. The bill contained roughly $620 billion in tax hikes, and just a fraction of that in spending cuts. As one House Republican told Fox News, "I can’t imagine a ratio such as that warming our fiscal hearts."

Not all Democrats were on board either. Many voiced frustration that tax hikes would only affect those making above $450,000 – when Obama originally campaigned on raising them for households making above $250,000.

The fiscal deal, though, still pushes off a permanent decision on the spending cuts until two months down the road, when lawmakers could find themselves in a similar position. And lawmakers are poised to renew a fight in a matter of weeks over raising the debt ceiling – which the U.S. government would have hit Dec. 31 if not for the Treasury Department taking emergency measures.

Click to see how your member of Congress voted on fiscal crisis bill.