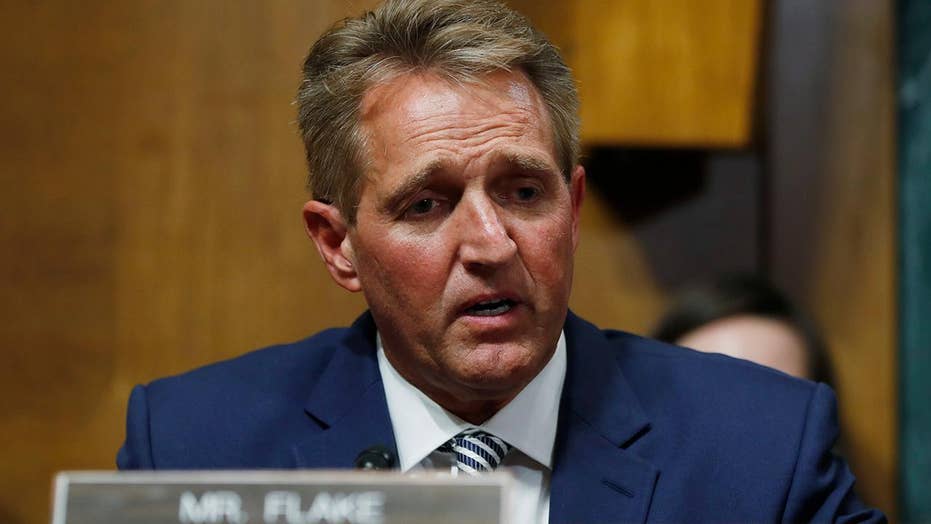 Republican Senator Jeff Flake calls for a one-week delay of the Senate floor vote to provide for FBI investigation.

The Senate Judiciary Committee endorsed Judge Brett Kavanaugh in a party-line vote on Friday afternoon. That sent his Supreme Court nomination to the full Senate a day after an emotional hearing in which a California professor leveled sexual assault allegations - allegations that Kavanaugh emphatically denied.

The committee voted 11-10 to recommend Kavanaugh, with previously undecided GOP Sen. Jeff Flake of Arizona supporting him. However, that support came with a last-minute caveat that holds major implications for a final vote.

After meeting with Democrats behind closed doors, Flake, who earlier in the day announced he would endorse the nominee, emerged to call for a delay in a full floor vote to allow for an FBI investigation “limited in time and scope.” While backing Kavanaugh at the committee level, Flake said he'd only be "comfortable" moving ahead on the floor if the FBI investigates further.

He said the pause should last for no more than one week. FBI officials told Fox News Friday afternoon that they had not been contacted by the White House to investigate Ford's allegations.

The call throws into doubt whether Kavanaugh can win enough support. The FBI and Trump administration have balked at another investigation. But Republicans have a slim 51-49 majority and can afford few defections.

The development caught the White House by surprise, just as the momentum started to shift in Kavanaugh's direction.

“Somebody’s got to explain this to Trump,” Republican Sen. Lindsey Graham, of South Carolina, told reporters. “I guess that will be my job.”

Minutes later, when asked by reporters whether he's willing to re-open a background investigation, President Trump said: "I'm going to rely on all of the people, including [Sen. Chuck] Grassley, who is doing a very good job. That will be a decision that they are going to make and I suspect they will be making some decision soon."

The decision on timing for a vote will be up to Senate Majority Leader Mitch McConnell, though the administration has authority over any investigation.

The Senate had been expected to launch into full debate over the weekend, with a final vote tentatively set for Tuesday. Sen. John Kennedy, R-La., later said that Republicans have "reached an accord" on how to proceed, but did not give any details.

Flake earlier gave a major boost to Kavanaugh with a Friday-morning announcement that he would support him, saying, "I left the hearing yesterday with as much doubt as certainty."

But he immediately came under heavy pressure, with protesters accosting him and Democrats lobbying him on the sidelines to reconsider.

If Flake remains a "yes," there would be 48 pledged Republicans, with Sens. Susan Collins, R-Maine, and Lisa Murkowski, R-Alaska, the two remaining wild cards. Sen. Mike Enzi, R-Wyo., has not announced his stance, but is expected to support the nominee. Republicans need 51 votes to confirm.

Once the speeches started, Democrats issued furious broadsides against Republicans, calling for them to delay the vote pending a full FBI investigation -- something Republicans have deemed unnecessary.

Sen. Cory Booker, D-N.J., said that "this is not a partisan moment, it is a moral moment in our nation."

"The pernicious patriarchy in this country must stop," he said before calling for a delay. When he finished his remarks, he snatched up his papers and rushed out of the meeting.

Sen. Sheldon Whitehouse, D-R.I., said that the court was "flying all the flags of a captured agency dancing to special interests' tune and ramming through precedent and principle to get there."

"This will be a disaster for the court, and I believe Kavanaugh will contribute to that disaster," he said.

Sen. Dick Durbin, D-Ill., meanwhile, attacked Kavanaugh for his remarks at the committee hearing Thursday. In those remarks, the nominee blasted Democrats and those seeking "revenge on behalf of the Clintons."

Republicans did not back down on their rhetoric, with Sen. John Kennedy of Louisiana decrying an "intergalactic freakshow."

"Congress has hit rock bottom and started to dig," he said.

Outside the committee room, Hirono told reporters that "the American people need to stand up and see this railroad job for what it is."

Before Flake's announcement, swing-vote Democratic Sen. Joe Donnelly of Indiana announced he would oppose Kavanaugh, citing in part the refusal to launch a new FBI probe into the allegations.

"I have deep reservations about Judge Kavanaugh’s nomination to this lifetime position and, as I stated, we have been unable to get all the information necessary regarding this nomination," he said in a statement.

"This has been a partisan and divisive process," he said in a statement. "The American people have been pulled apart by this entire spectacle and we need to take time to address these claims independently, so that our country can have confidence in the outcome of this vote."

The committee vote came a day after an angry and emotional hearing on allegations of sexual assault made against Kavanaugh. Both Kavanaugh and Christine Blasey Ford, who accused Kavanaugh of assaulting her at a high school party in the 1980s, testified before the committee on Thursday in an eight-hour session.

Kavanaugh emotionally denied Ford’s accusation, along with a number of others made against him in recent days. Kavanaugh trained his sights on committee Democrats.

Democrats pushed back, asking Kavanaugh why he would not himself urge an FBI investigation into the charges against him. Kavanaugh responded that he would assent to whatever the committee decided, but noted that an FBI probe wouldn’t draw conclusions, only gather information.

Kavanaugh’s nomination is likely to see unanimous or near-unanimous opposition from Democrats, with only a few red-state Democrats even considering a vote for him.

On Friday, Senate Judiciary Committee Ranking Member Dianne Feinstein, D-Calif., blasted Kavanaugh's testimony and said it showed him to be "aggressive and belligerent" and took issue with his attacks on Democrats.

"I have never seen anyone who wants to sit on the highest court in the land behave in that manner," she said.

Republicans’ thin majority in the Senate at large gives the GOP very little room for defections. Sources told Fox News that former President George W. Bush has been making calls to Republican senators in an effort to help secure the confirmation.