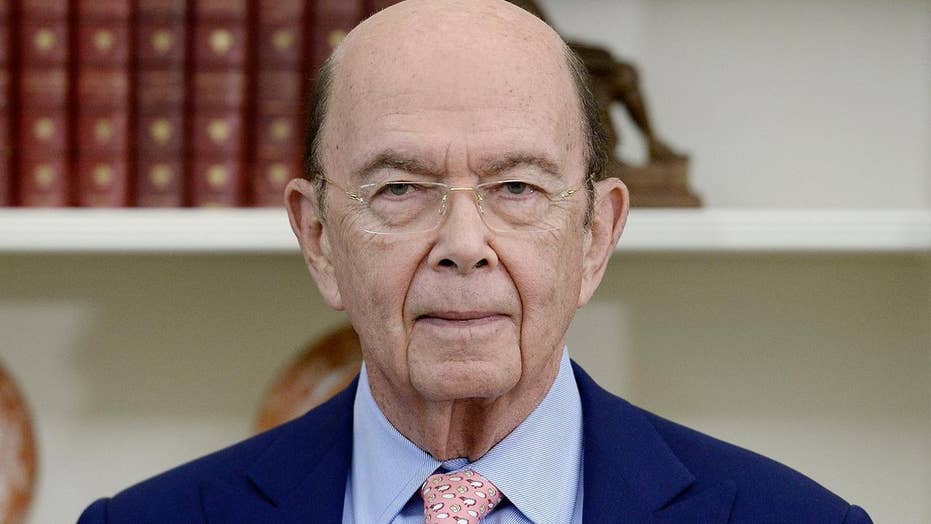 How Wilbur Ross is connected to the Paradise Papers

The Paradise Papers reportedly name Donald Trump's Commerce Secretary Wilbur Ross for not disclosing business ties to the Kremlin. Watch the video to find out how and whether or not the Commerce Dept is responding.

The Commerce Department on Sunday pushed back on published reports that Secretary Wilbur Ross has a stake in a company connected to Russian President Vladimir Putin, which he did not previously disclose to lawmakers.

According to records obtained by the International Consortium of Journalists, Ross is an investor in Navigator Holdings, a shipping giant whose customers include Russian gas and petrochemical producer Sibur.

Putin’s son-in-law Kirill Shamalov once owned more than 20 percent of the company, but now holds a much smaller stake.

A Commerce spokesman told Fox News on Sunday that Ross was not involved with Navigator’s decision to engage in business with Sibur, a publicly traded company, which was not under sanction at the time and is not currently.

Still, the published reports by news agencies including NBC and the BBC likely will raise more questions about whether those associated with Trump are connected to Russia, amid special counsel Robert Mueller’s investigation into whether both sides colluded to influence the 2016 White House race.

Yet it wasn’t immediately clear how many partners Ross might have or what the profit-sharing agreement might be. The reports also indicated there was no sign Ross broke any disclosure rules.

The newspaper then shared the records with ICIJ and a network of more than 380 journalists in 67 countries. The New York Times is its U.S. partner in this inquiry. The Times earlier reported on the Ross holding.

“In concealing his interest in these shipping companies — and his ongoing financial relationship with Russian oligarchs — Secretary Ross misled me, the Senate Commerce Committee, and the American people. Secretary Ross’ financial disclosures are like a Russian nesting doll, with blatant conflicts of interest carefully hidden within seemingly innocuous holding companies,” said Senator Richard Blumenthal, D-Conn., in a statement to Fox News. “The Commerce Department’s Inspector General must open an inquiry immediately. Only after a thorough investigation can the American people be sure that Secretary Ross really has their best interests at heart — and that he hasn’t prioritized his own personal profits or those of Vladimir Putin or his Russian business partners.”

It wasn’t immediately clear exactly how much of Navigator, which is publicly traded on the New York Stock Exchange, Ross personally owns. ICIJ reported that Ross and other investors own four Cayman Island entities that in turn own 31.5 percent of Navigator, a stake worth $176 million at Friday’s closing stock price.

Ross’ stake in Navigator is likely a small fraction of that. In financial disclosure forms he filed with the government this year, Ross valued his holdings in the Cayman Island entities, which include other companies besides Navigator, at no more than $10.1 million.

Sibur contributed 8 percent to Navigator’s revenue last year, according to reports filed with securities regulators. Russia’s energy sector is largely controlled by individuals with ties to state actors, including Putin.

Much of the new trove of files includes bank statements, emails and loan agreements from Appleby, a law firm that helps set up offshore dummy companies and trusts. Appleby told the ICIJ that there is “no evidence” that it has done anything wrong.

Other records came from Asiaciti Trust, a family-run offshore specialist based in Singapore, and from 19 corporate registries maintained by governments in jurisdictions that draw the wealthy seeking privacy.

The ICIJ reported that Silicon Valley investor and Russian citizen Yuri Milner got $191 million from VTB Bank, and invested that money in Twitter. The leaked records also show that a financial subsidiary of Russian energy company Gazprom funded a shell company that invested in a Milner-affiliated company that held roughly $1 billion in Facebook shares shortly before its 2012 initial public offering.

Milner told the ICIJ that he was unaware of any involvement by the Gazprom subsidiary in any of his deals and that none of his investments has been related to politics.

Milner also has invested in a tech-savvy real estate fund that was co-founded by Trump adviser and son-in-law Jared Kushner called Cadre. Milner told the ICIJ that he used his own money for the investment.

Sunday’s revelations follow last year’s release of records from a Panama-based firm involved in setting up offshore accounts. That disclosure triggered investigations in several countries, the resignation of the prime minister of Iceland and ouster of the leader of Pakistan. The Panama Papers also revealed that close associates of Russia’s leader Putin had been using the dummy accounts abroad to store their wealth, including a close Putin friend who had $2 billion of offshore assets.

There are legitimate reasons for setting up offshore accounts, but lax regulation and anonymity in some jurisdictions make it easy to launder money, evade taxes and avoid regulatory scrutiny. Critics of the widening gap between the super-wealthy and the rest have seized upon the use of tax havens as revealed in the Panama Papers as evidence of a crisis, and governments have promised to crack down.

In the case of Ross, the ICIJ reported Navigator’s Russian customer, Sibur, has ties to Putin in addition to his son-in-law.

A big shareholder is Gennady Timchenko, who was targeted by the U.S. and other western nations for sanctions after Russia’s invasion of the Ukrainian region of Crimea in 2014. A few months later, the U.S. barred banks from providing long-term financing to a gas company belonging to another large Sibur shareholder, Leonid Mikhelson. Mikhelson has also been sanctioned by the Treasury Department for propping up Putin’s rule.

Sibur itself was not targeted by the U.S. sanctions, but the Bank of America and the Royal Bank of Scotland reportedly backed away from doing business with the company.

The Russian gas producer last year contributed $23 million to Navigator’s revenue, an increase of more than 40 percent in two years.