Is Comey a serial leaker?

Defending his July 2016 public statement about the Hillary Clinton email case, then-FBI Director James Comey told senior agents later that year he worried the Justice Department would "screw around" with a decision on whether to prosecute her, and he said that regardless of what happened, "we knew it was going to suck in a huge way," according to an FBI transcript reviewed by Fox News.

In October 2016, Michael Kortan, who was serving as the FBI's public affairs chief but has since retired, shared the transcript of Comey's comments on the Clinton case delivered behind closed doors to special agents in charge. Based on the email date and time stamps, it appears the comments were made three weeks before the presidential election. With Comey now launching a media tour to promote his book, "A Higher Loyalty," the transcript provides a window into his thinking and decisions during a critical period before the election.

According to the transcript, Comey told agents he went back and forth on how to handle the recommendation against criminal charges, after then-Attorney General Loretta Lynch met with Bill Clinton on an Arizona airport tarmac in June 2016.

"The decision that there wasn't a prosecutable case here was not a hard one. The hard one, as I've told you, was how do we communicate about it. I decided to do something unprecedented that I was very nervous about at the time, and I've asked myself a thousand times since, was it the right decision. I still believe it was."

Comey's decision to deviate from standard procedures is central to the Justice Department inspector general's investigation into the FBI's and DOJ's handling of the Clinton email case.

Comey said he thought the FBI should have taken the lead because following standard procedures was not an option. "...what will happen to us is the Department of Justice will screw around it for Lord knows how long, issue probably a one sentence declination, and then the world will catch on fire, and then the cry in the public will be where on the earth is the FBI, how could the FBI be part of some corrupt political bargain like this, there's no transparency whatsoever..."

He continued, "We knew it was going to suck in a huge way. I knew. Nothing's (sic) that's happened, by the way, the storm has been outside my expectations. I knew what was going to happen, but I also knew after a lot of reflection that we would do far more damage to our beloved institution if we did the normal thing." 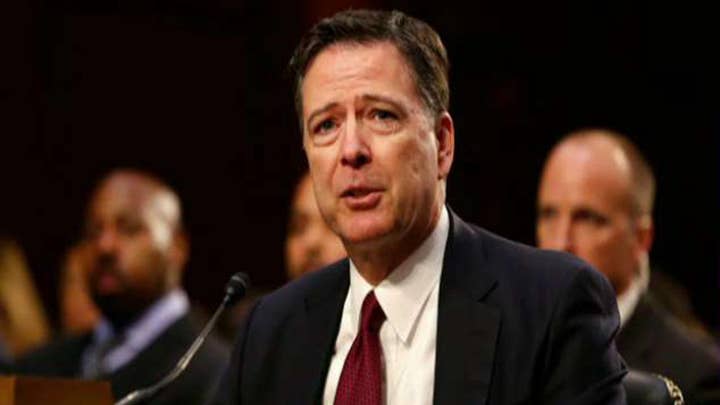 Comey also relayed to agents a conversation he said he had with Lynch before the July 2016 announcement. "'Madam Attorney General, I'm about to do a press conference, and I'm not going to tell you what I'm going to say.' She asked some question. I don't remember what it was, and I said, 'I'm sorry. I'm not going to answer approximately (sic) questions. I hope someday you'll understand why, but I think it's very, very important that I do this independently.'"

Using colorful language, Comey also said agents would likely be fired for using a personal unsecured server like Secretary of State Clinton did for government business, and pushed back on criticism of the FBI's handling of the case.

Comey responded to emails from FBI employees who said, "if I did what Hillary Clinton did I'd be in huge trouble." He replied, "My response is you bet your a-- you'd be in huge trouble. If you used a personal email, Gmail or if you (had) the capabilities to set up your own email domain, if you used an unclassified personal email system to do our business in the course of doing our business even though you were communicating with people with clearances and doing work you discussed classified matters in that, in those communications, TSSCI (Top Secret Sensitive Compartmented Information), special access program (SAP), you would be in huge trouble in the FBI. You would not be able to say to us, 'The people I was emailing with were cleared.  It was all in the course of the work.'"

Comey continued, "You might well get fired from the FBI. You would surely be disciplined in some severe way if you didn't get fired. Of that I am highly confident." He then seemed to reinforce his controversial recommendation against criminal charges in the Clinton case for the mishandling of classified information, that under the criminal statute, does not require intent.

Comey referred to the FBI investigators as an "all star team" but many have since been demoted, fired, or re-assigned as a result of the IG investigation. These individuals included deputy director Andy McCabe, who was fired; Peter Strzok, who was deputy assistant director of the counterintelligence division before he was demoted to Human Resources; and Strzok’s mistress and FBI attorney Lisa Page, who was reassigned. Kortan announced his retirement this past February.

In a portion of the transcript, which was redacted, Comey spoke of the challenge in "trying to get a lawyer to give you their laptop that you use for all of their legal work. Huge concerns there about attorney-client privilege, attorney work product. He had a few options there." It was unclear who "he" was. Comey said, “Near the end of this Investigation, we knew that two of Secretary Clinton’s lawyers had done a culling where they went through the emails and decided which ones were work related and which ones weren’t, which ones could be deleted, which ones would be kept and produced. “

'MediaBuzz' host Howard Kurtz weighs in on scorn thrown at former FBI director James Comey by both liberals and conservatives in advance of his book tour.

FBI interviews known as 302s revealed that only 12 of 14 bankers boxes of Clinton's emails were picked up from the law firm Williams & Connolly. David Kendall, an attorney at the firm, has represented Bill and Hillary Clinton together and separately, from the former president’s sex scandals to the missing billing records reflecting Hillary Clinton’s work as a partner in the Rose Law Firm in Arkansas.

This comment is striking because Comey testified in 2017 that Priestap -- who reported to Comey as the assistant director of counterintelligence -- told him not to inform Congressional leadership about the bureau's investigation into alleged contacts between Russian officials and the Trump campaign.

"It is silly. Silly is the right word to suggest the FBI did anything other than our usual professional work here. I’m very proud of the work we did."

Based on Kortan’s email, that was the end of Comey’s speech to senior agents about the Clinton case.

Fox News provided the FBI with the email date, time, sender and subject line, as well as lengthy quotes, to locate the record for comment, but the FBI gave no comment. Many lawmakers questioned why the record was not provided more promptly to Congress.

Fox News also sent a series of questions to the publisher of Comey’s book. They included a request for comment from Comey on his statements to FBI agents, whether it was standard for FBI public affairs to share transcripts from closed-door sessions outside the bureau, whether Comey authorized it and for what law enforcement purpose. There was no immediate response.