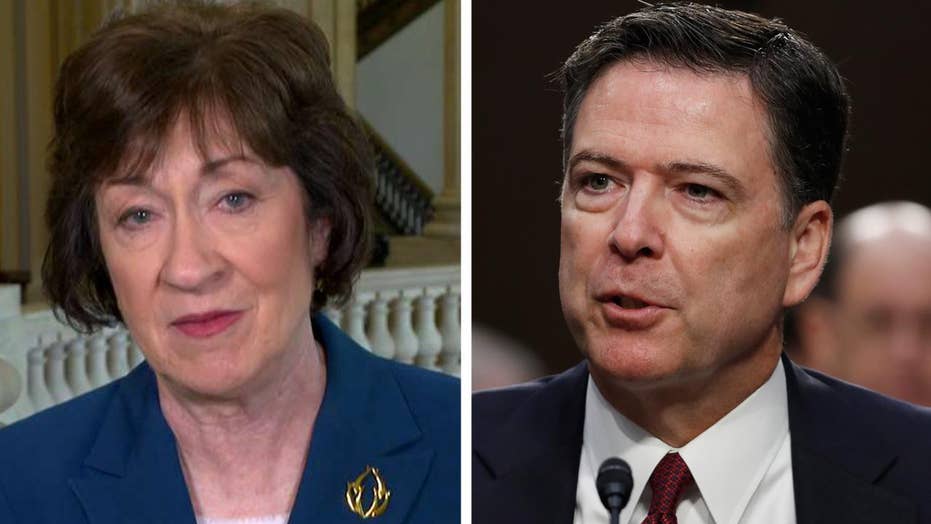 Sen. Collins: Comey has made some real mistakes in judgement

Lawyers for President Trump shot down ex-FBI Director James Comey's claim that a tweet from the commander-in-chief prompted him to leak a memo detailing a private conversation with Trump – and a close examination of a pre-tweet New York Times story may bolster their claim.

During testimony before the Senate Intelligence Committee on Thursday, Comey said he was spurred to orchestrate the release of the detailed memo he wrote about a one-on-one talk with Trump after the president tweeted May 12: “James Comey better hope that there are no ‘tapes’ of our conversations before he starts leaking to the press!”

“I woke up in the middle of the night ... because it didn’t dawn on me originally that there might be corroboration for our conversation,” Comey told senators. “And my judgment was, I needed to get that out into the public square. And so I asked a friend of mine to share the content of the memo with a reporter … because I thought that might prompt the appointment of a special counsel.”

The admission itself was dramatic, and drew the scorn of Trump allies. Trump’s personal lawyer, Marc Kasowitz, read a statement blasting Comey for admitting “he unilaterally and surreptitiously made unauthorized disclosures to the press of privileged communications.”

“The public record reveals that the New York Times was quoting from these memos the day before the referenced tweet, which belies Mr. Comey’s excuse,” the statement from Kasowitz said.

Though Comey claimed he didn't orchestrate the leak until May 16, four days after Trump's May 12 tweet, a New York Times article from May 11 appears to track closely with the memo's contents.

There are in fact striking similarities between that pre-tweet article and Comey's written testimony, suggesting the memo's contents may have been leaked -- by somebody -- before Trump vented on Twitter.

Kasowitz clarified on Friday that he was referencing a May 11 article, “In a Private Dinner, Trump demanded Loyalty. Comey Demurred.” The language contained in the article – which seemed to spur Trump’s “tapes” tweet – references Comey’s interactions with Trump that are essentially repeated in Comey's submitted testimony.

"It is obvious that whomever was the source for the May 11, 2017 New York Times story got that information from the memos or from someone reading or who had read the memos," Kasowitz said in a statement. "This makes clear, as our statement said, that Mr Comey incorrectly testified that he never leaked the contents of the memo or details of the dinner before President Trump's May 12, 2017 Tweet."

Indeed, two passages about the Jan. 27 dinner in particular have similar wording:

Comey’s testimony, based in part on a review of memos he wrote – “I added that I was not ‘reliable’ in the way politicians use that word, but he could always count on me to tell him the truth.”

The Times article, based on an anonymous source – “…Mr. Comey has recounted to others, he told Mr. Trump that he would always be honest with him, but that he was not ‘reliable’ in the conventional political sense.”

The Times article – “Later in the dinner, Mr. Trump again said to Mr. Comey that he needed his loyalty. Mr. Comey again replied that he would give him ‘honesty’ and did not pledge his loyalty, according to the account of the conversation. But Mr. Trump pressed him on whether it would be ‘honest loyalty.’ ‘You will have that,’ Mr. Comey told his associates he responded."

The Comey memos are never explicitly mentioned in the May 11 the New York Times story; however, details that appeared to have been written in the memos were. Not until a May 16 story, which Comey indicated Thursday was the first story his friend leaked at his request, was there a public mention of the Comey memos.

During his Thursday testimony, Comey said the only people he told about his recollections of the Trump encounters were the “deputy director, my chief of staff, general counsel, deputy director’s chief counsel and then, more often than not, the number three person at the FBI, the associate deputy director. And quite often, head of the national security branch.”

Given the timeline and Comey’s own testimony, it would appear there are two scenarios for how the information got out in the May 11 piece.

Trump's lawyer seems to argue that despite his testimony, Comey made his move even before Trump tweeted about tapes.

The other scenario is one of the top FBI officials referenced by Comey first leaked confidential conversations between the president and his then-FBI director.

The identity of The New York Times’ source for the May 11 article remained unclear on Friday and Columbia University Law Professor Dan Richman, who said he was Comey’s “friend” who leaked the contents of his memos in subsequent stories, declined to answer further questions.