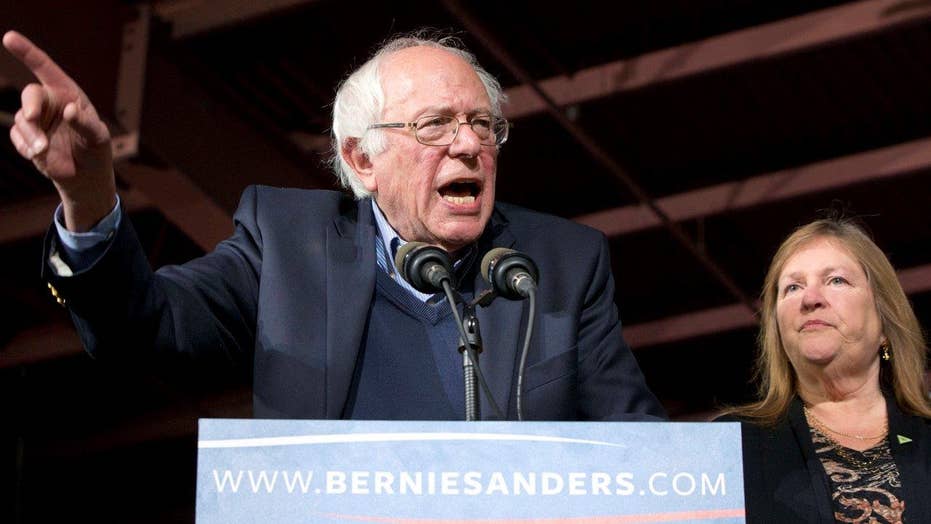 Was Super Tuesday the end of the line for Bernie Sanders?

Hillary Clinton can’t lock up the Democratic nomination just yet – but she seemed to be well on her way Tuesday, building a large delegate lead against her rival, Sen. Bernie Sanders.

Fox News projected Sanders winning primaries in Oklahoma and his home state of Vermont, as well as caucuses in Colorado and Minnesota.

Tuesday's results considerably narrowed Sanders' path to the Democratic nomination. Mathematically, he can still win his party’s nod, but it will be an uphill climb.

Sanders told supporters in Vermont that he was up for the challenge and vowed to keep fighting until the Democratic convention in Philadelphia in July.

“This campaign is not just about electing a president. It is about transforming America,” Sanders said Tuesday night at a rally in Essex Junction, Vt. “It is about making our great country a nation it has the potential to be.”

Sanders added that the election is about “dealing with some unpleasant truths” and “having the guts to confront those truths.”

She made her victory speech in Florida, ahead of the key March 15 primary there.

Democrats in 11 states weighed in on whom they want on the November ballot. Clinton aimed for a clean sweep of six states, while Sanders set his sights on five states, including two with caucuses.

Tuesday was the busiest day on the primary calendar so far. For Democrats, 859 delegates will be up for grabs – more than a third of the 2,383 needed to clinch the nomination.

Sanders started the day by casting a ballot for himself in Vermont and said he felt “great” about his prospects.

“After a lot of deliberation, I know that Bernie Sanders here in Vermont got at least one vote,” Sanders joked to reporters with his wife Jane by his side. “I was working on my wife. So I probably got two. So we are feeling pretty good.”

Clinton spent her morning talking to local residents at a Minneapolis coffee shop and local market. She was expected to spend the evening in Miami.

Clinton’s victory over Sanders in the southern states hinged on turning out the states’ large black population. About 4 in 10 voters in Georgia's Democratic primary were black, and about 8 in 10 of them favored Clinton. That mirrors her strong showing among black voters in South Carolina over the weekend.