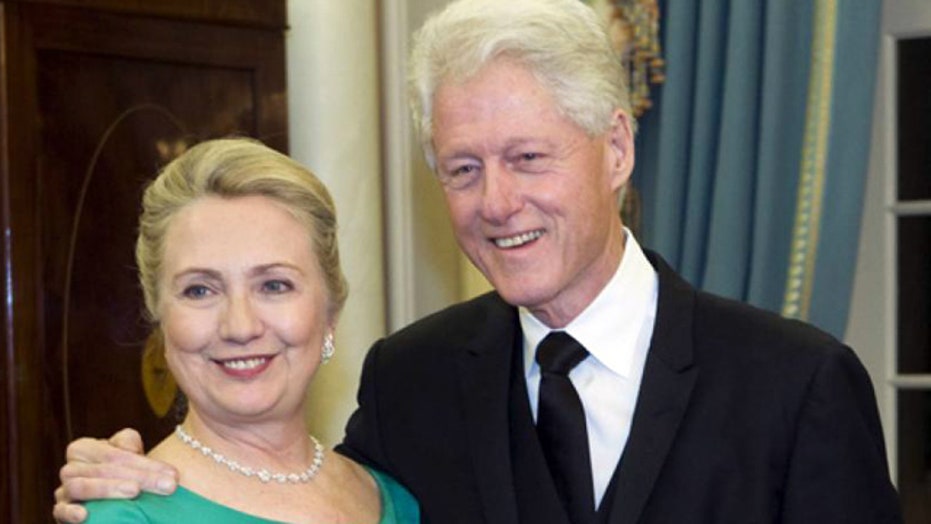 What are Bill and Hillary really worth?

Why are the Clintons talking finances?

Former Secretary of State Hillary Clinton has not announced she’s a candidate for the 2016 presidential election, but should she run, a remark made during an interview with ABC's Diane Sawyer may be cemented as the first gaffe of her campaign:"We came out of the White House not only dead broke but in debt," she said.

The comment backfired in a bad way, lighting up the Twitterverse and making it onto the night time television comedy shows. "I still get emotional just thinking about it," “The Daily Show's” Jon Stewart said, wiping an imaginary tear from his eye with a $20 bill.

Clinton tried to walk it back earlier this week during an interview with PBS's Gwen Ifill. "My inartful use of those few words doesn't change who I am, what I've stood for my entire life, what I stand for today," she said.

But that same day, her husband may have accidently worsened the damage while praising $500 "Shinola" wrist watches made in Detroit. "I bought 14 of them..." he told an interviewer. "...in two different runs I bought five at Christmas and nine when I was there, and I just give them away and hope that I'll make you more customers."

Americans know that post-presidential families have tremendous earning potential. With Hillary's added drawing power as a former senator and secretary of State,she can command $225,000 for a speech. That's what the University of Las Vegas will pay Clinton to headline its fundraising gala next October.

As FDR and JFK demonstrated, wealth doesn’t necessarily turn off voters. But the appearance of political calculation can, said Ed Klein, author of"Blood Feud: The Clintons vs. the Obamas."

“I do see excessive calculation on the part of the Clintons pretending they were so poor," he said. "In fact, Bill Clinton has become the richest ex-president in our history. He's worth somewhere near $200 million."

Some analysts argue that Hillary is strongest when she appears less calculating, less defensive, and more emotive.

In a recent live interview on Fox News’s “Special Report,” the former secretary of State appeared to charm and perhaps even set a relaxed mood for two tough interrogators, Bret Baier and Greta Van Susteren. After a series of questions from Baier,she quipped, "I want to be fair and balanced to Greta here." She then let out an uncharacteristic heartylaugh.

"In 2008 it took a devastating loss in Iowa to get her to reach down and find that voice,you know..." said Democratic consultant and Fox News contributor Joe Trippi.

"It's good for her to be out there early like this. She's going to make mistakes. They'll be long forgotten as we enter 2015 and 2016 and she'll have learned from them, and I think that's going to make her a stronger candidate," he added.

Right after that 2008 Iowa primary loss,Hillary won the New Hampshire primary. Some suggest that an unscripted moment in a diner when she appeared to shed a tear and her voiced quivered as she said, "You know, I have so many opportunities in this country. I just don't want to see us fall backwards..." may have helped throw her over the top in New Hampshire.

But her initial footsteps into the icy cold waters of Campaign 2016 may pose other difficulties. Sales of her new book, “Hard Choices,” continue to fall in onlyits second week.Publisher Simon and Schuster may not be able to recoup losses on her massive $14 million advance.

Still, many who queue up for a signed copy - the majority of them women – seem to identify with her aspirations to break through the White House glass ceiling,the highest one in the land.