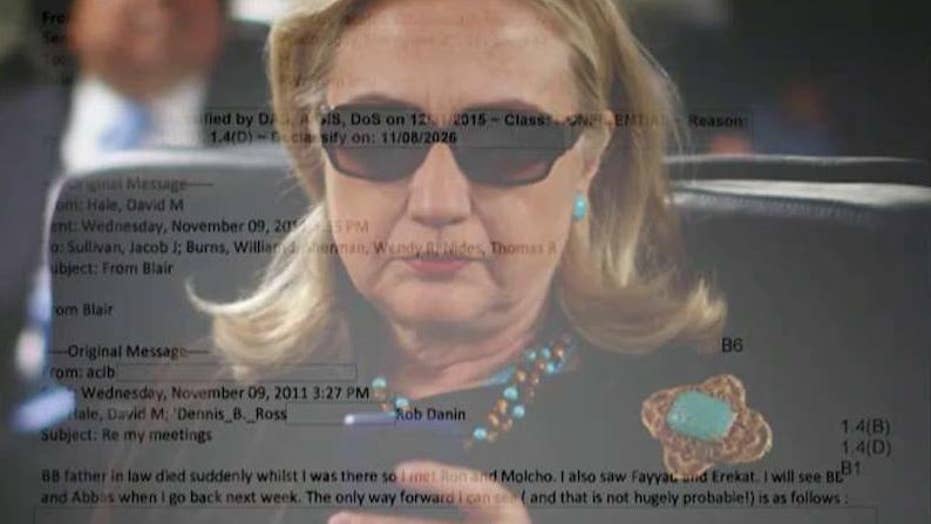 What Pagliano is telling the FBI about Clinton's server

Less than a month after becoming secretary of state, and registering the personal email domain that she would use exclusively for government business, Hillary Clinton’s team aggressively pursued changes to existing State Department security protocols so she could use her BlackBerry in secure facilities for classified information, according to new documents released under the Freedom of Information Act.

“Anyone who has any appreciation at all of security, you don’t ask a question like that,” cybersecurity analyst Morgan Wright told Fox News.  “It is contempt for the system, contempt for the rules that are designed to protect the exact kind of information that was exposed through this email set up. “

Current and former intelligence officials grimaced when asked by Fox News about the use of wireless communications devices, such as a BlackBerry, in a SCIF (Sensitive Compartmented Information Facility) emphasizing its use would defeat the purpose of the secure facility, and it is standard practice to leave all electronics outside.

A former State Department employee familiar with the Clinton request emphasized security personnel at the time thought the BlackBerry was only for unclassified material, adding their concerns would have been magnified if they had known Clinton's email account also held classified material.

“When you allow devices like this into a SCIF, you can allow the bad guys to listen in,” Wright added.

A February 17, 2009 email marked SECRET and cleared through the NSA says, “Ms. Mills described the requirement as chiefly driven by Secretary Clinton, who does not use standard computer equipment but relies exclusively on her Blackberry for emailing and remaining in contact on her schedule etc. Ideally all members of her suite would be allowed to use Blackberries for communication in the SCIF (Sensitive Compartmented Information Facility)”

The emails, obtained by Judicial Watch as part of a Freedom of Information Act lawsuit also show that a specialized NSA team was brought in to assess the vulnerabilities and feasibility of using wireless communications, including within a secure facility.

The NSA State Department liaison, whose name was withheld, told Mills in a now highly redacted email:  “Sometimes the distinction between what can be done and what is, or is not, recommended to be done differ; this is one of those instances.  (State Department Diplomatic Security) DS’s response illustrates their level of concern based on their extensive professional expertise. “

Another memo from Mar‎ch 2009, obtained by Judicial Watch through its FOIA lawsuit, from Assistant Secretary for Diplomatic Security Eric Boswell to Mills explicitly warned,  “the vulnerabilities and risks associated with the use of Blackberries in Mahogany Row [seventh floor executive offices] considerably outweigh their convenience.”  Clinton has claimed she used the personal account and BlackBerry for convenience.

Clinton never used a State Department issued BlackBerry. It is not clear from the documents whether Clinton and her team went ahead and used their BlackBerrys in SCIFs despite the concerns, including those of the NSA. Though a state department official said "no waiver allowing PDAs within Mahogany Row was granted.".

A February 18 2009 email from the State Department’s Senior Coordinator for Security Infrastructure, Donald R. Reid, states “…once she (Clinton) got the hang of it, she was hooked, now every day, she feels hamstrung because she has to lock up her BB up.  She does go out several times a day to an office they have crafted for her outside the SCIF and plays email catch-up.  Cheryl Mills and others who are dedicated BB addicts are frustrated because they too are not near their desktop very often during the working day…”

The reference to a secondary office for Clinton appears to conflict with a February statement from the State Department that no stand-alone computer was set up outside Clinton’s main office on the executive floor, known as Mahogany Row, to check her personal account.

On February 25, Fox News pressed the State Department spokesman about a January 2009 email, also obtained by Judicial Watch, between Under Secretary for Management Patrick Kennedy and then Clinton chief of staff Mills where Kennedy said it was a “great idea” to setup a stand-alone PC for Clinton to check her email.

The State Department said Wednesday no computer was set up but confirmed there was a space created to accommodate Clinton's personal email use.  ‎"There is an area dedicated to supporting the secretary outside but in the immediate vicinity of the secretary's secure office. Secretary Clinton, as with anyone, could use such non-SCIF spaces to check personal devices.," a State Department official said.

Clinton did not use a government-issued BlackBerry that was certified as secure for government use. Under Secretary for Management Patrick Kennedy recently told the Benghazi Select Committee that he knew about Clinton's personal account from the earliest days, but did not understand the extent of its use, even though he sent State Department business to Clinton via the Clintonemail account.

In January 2009, Clinton signed at least two non-disclosure agreements in which she promised to protect classified information. Since then, more than 2,100 emails containing classified information have been identified, as well as 22 Top Secret that are too damaging to national security to release.

Earlier this week, Judicial Watch presented the federal court in Washington with a list of 7 Clinton aides it wants to question under oath about Clinton’s use of a private email sever when she was secretary of state.