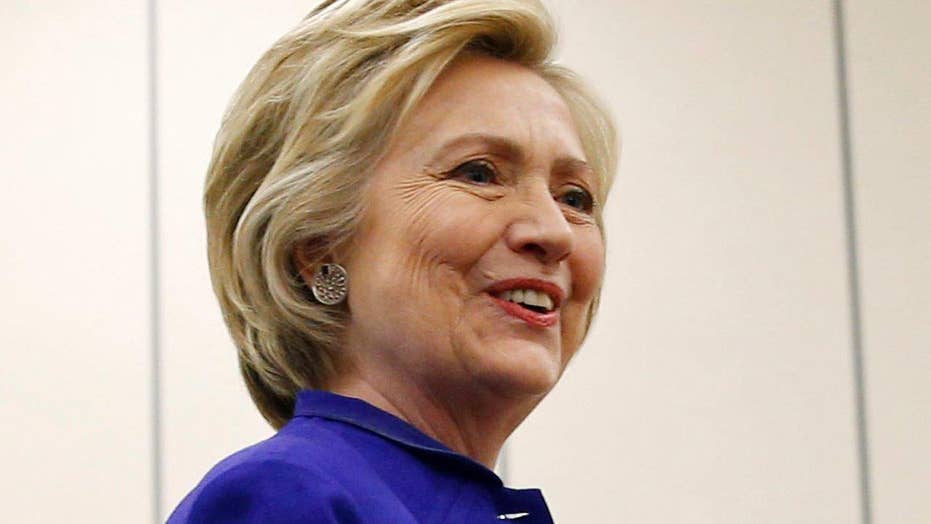 Hillary Clinton talks to press at campaign stop in Calif.

On the heels of Hillary Clinton's top spokesman catching heat from the press for his claim that his boss had made herself available to reporters, the Democratic presidential front-runner actually did stop to answer media questions as she campaigned Monday in California.

Clinton fielded questions on the sidelines of an event in Compton, using the chance to set the scene for Tuesday’s primaries, hammer Donald Trump – and nudge Democratic rival Bernie Sanders toward the door.

While saying "it's not over until it's over,” Clinton gave a pointed answer when asked if Sanders should concede after Tuesday, when six states including California vote in the last major round of primaries.

“Tomorrow is eight years to the day after I withdrew and endorsed then-Senator Obama,” Clinton said. “I believed it was the right thing to do. No matter what differences we had in our long campaign, they paled in comparison to differences we had with the Republicans, and that is actually even more true today.”

While Sanders has brought the California contest to a dead heat and is aiming for an upset victory there, Clinton is virtually guaranteed to reach the 2,383-delegate threshold to clinch the nomination by nightfall.

Sanders, though, has vowed to keep fighting after Tuesday. He was holding a press conference of his own at the same time Clinton spoke to reporters, and said his focus is on winning the California contest.

A day earlier, he said during an evening rally in San Diego that Democratic leaders should take notice that the "energy and grassroots activism" that will be crucial to the party in the fall "is with us, not Hillary Clinton."

But reports also surfaced Monday that President Obama is getting ready to endorse Clinton.

The New York Times said the endorsement could come as early as this week – a prediction Press Secretary Josh Earnest would not comment on at Monday’s press briefing.

Meanwhile, Clinton’s Q&A with reporters Monday follows fresh criticism of her track record this year of making herself available to the media. She has taken heat for not holding a bona fide press conference all year – and spokesman Brian Fallon was criticized by her traveling press corps after claiming Sunday that Clinton “oftentimes” takes questions from reporters on the trail.

Speaking with CNN, Fallon had said “there’s no reluctance” to speak with the press, claiming Clinton often “comes out after an event has concluded” for what’s known as an “avail” – and “she'll literally stand there for 15, 20 minutes and answer questions from her traveling press corps.”

Fallon added: “Bottom line is that she's answering questions from the reporters that are covering her day to day.”

However, before Monday’s “avail,” a review of Clinton’s informal Q&A’s with the press shows her most recent took place May 9 -- nearly a month ago -- in Stone Ridge, Va., and lasted two-and-a-half minutes. She’s done a total of roughly 10 this year.

Clinton typically takes questions from the press at these “avails” for five minutes or less, and several journalists on the campaign trail with her took to Twitter to challenge Fallon’s description.