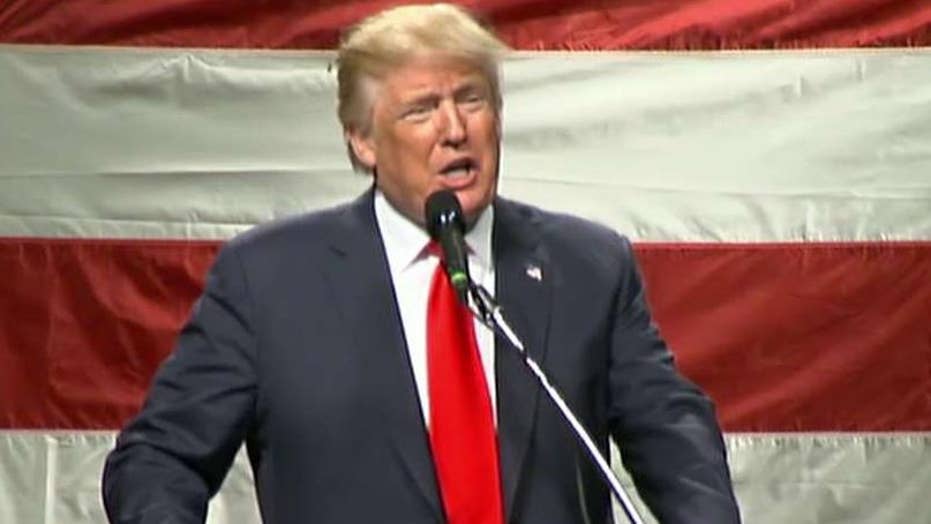 Trump pushes for big win in home state of NY

Hillary Clinton appeared increasingly confident this weekend about her position as the Democratic presidential front-runner -- downplaying the sharp exchanges with rival Sen. Bernie Sanders as typical, late-campaign rhetoric; focusing her attacks on GOP front-runner Donald Trump and even campaigning in California ahead of Tuesday’s big New York primary.

“At the end of a campaign that is certainly hard fought, there are going to be a lot of charges and all kinds of misrepresentations,” Clinton told ABC’s “This Week,” avoiding a question about high-dollar campaign support and instead talking about the rival campaigns’ positions on increasing the minimum wage to $15 an hour.

“Let's look at what's really at stake here,” she continued. “We're having a vigorous back and forth about raising the minimum wage, which we both support. And the Republicans don't want to do that at all. In fact, Donald Trump has said that American workers are paid too much.”

Clinton has a double-digit lead over Sanders in New York, while Trump has a nearly 20-point lead over challenger Ohio Gov. John Kasich and a more-than-30-point lead over Texas GOP Sen. Ted Cruz, second to Trump in the delegate count, according to the RealClearPolitics poll average.

Clinton talked to ABC after a big weekend of campaigning in California, which does not hold its primary until June 7, the last day of the primary season but with 475 delegates at stake.

She attended two fundraisers hosted by Hollywood star George Clooney -- one in San Francisco and the other in Los Angeles. And she held a rally at Southwest College, in the Los Angeles area.

Sanders supporters were among those picketing and throwing cash at the Clinton motorcade outside of the San Francisco fundraiser Friday night.

A $353,400 contribution, which will go to a variety of Clinton and Democratic Party-related efforts, was requested for some tickets, an amount Clooney called “obscene.”

Clinton was back in New York on Sunday, as was Sanders, who had just returned from Rome where he attended a Vatican conference at which he briefly met with Pope Francis.

“I have become a little bit tired of being beaten up by the negativity of the Clinton campaign. And we're responding in kind,” Sanders said on CBS’s “Face the Nation” about his TV debate last week with the former secretary of state and the increasing negativity in the Democratic primary.

The Vermont senator and self-described democratic socialist then launched into his criticism about Clinton’s Wall Street ties, support for the war in Iraq and the minimum wage issue.

Clinton leads Sanders 1758-to-1076 in the delegate count with 247 at stake in New York. Sanders faces long odds in surpassing Clinton and getting 2,383 delegates to secure the nomination before the party’s July convention.

However, he has beaten Clinton in seven of the last eight contests, and his campaign remains optimistic about at least perhaps challenging Clinton for so-called super-delegates at the convention in Philadelphia.

“I think we have real shot to win on Tuesday if there is a large voter turnout,” Sander said Sunday. “I think a lot of these super-delegates are going to conclude that Bernie Sanders is the candidate to prevent what must not be allowed to happen, and that is Donald Trump becoming president.”

Trump has now taken to calling Clinton “crooked Hillary,” in an apparent effort to damage her like he did by referring to Florida GOP Sen. Marco Rubio as “Little Marco.”

Clinton told ABC: "What I’m concerned about is how he goes after everybody else. … He can say whatever he wants to say about me, I really could care less.”

On Sunday, Trump and his campaign also continued to criticize the Republican Party’s delegate-awarding process, which they say relies too much on party “bosses.”

“I think we’re going to make it without (relying) on the bosses,” Trump said at a rally in Poughkeepsie, N.Y. “I spent practically less money than anybody else, and I’m in first place by a lot. Don’t you want that for your president?”

Cruz has been able to out maneuver the Trump campaign for super-delegates and has taken the roughly dozen or so delegates in such states as Colorado and more recently Wyoming, which hold nomination conventions instead of caucuses or voter primaries.

Trump campaign manager Corey Lewandowski told “Fox News Sunday” that Cruz does better in state contests in which “party bosses pick the delegates,” not the voters.

He added: “There are people out there who don’t have the ability to write a check,” to become a convention-picked delegate.

Trump, Cruz or Kasich will need 1,237 delegates to win the Republican Party nomination. Trump leads with 744, followed by Cruz with 559 and Kasich with 144.

Ken Cuccinelli, Cruz’s delegate operations director, told ABC that the Trump campaign must stop accusing Cruz of not following the delegate rules and using “hyperbolic rhetoric” about the issue that it cannot support.

Republican National Committee Chairman Reince Priebus said last week on Twitter that the nomination process has been known to all for more than a year and that the campaigns have a responsibility to understand the process.

“Complaints now?” he tweeted. “Give us all a break."