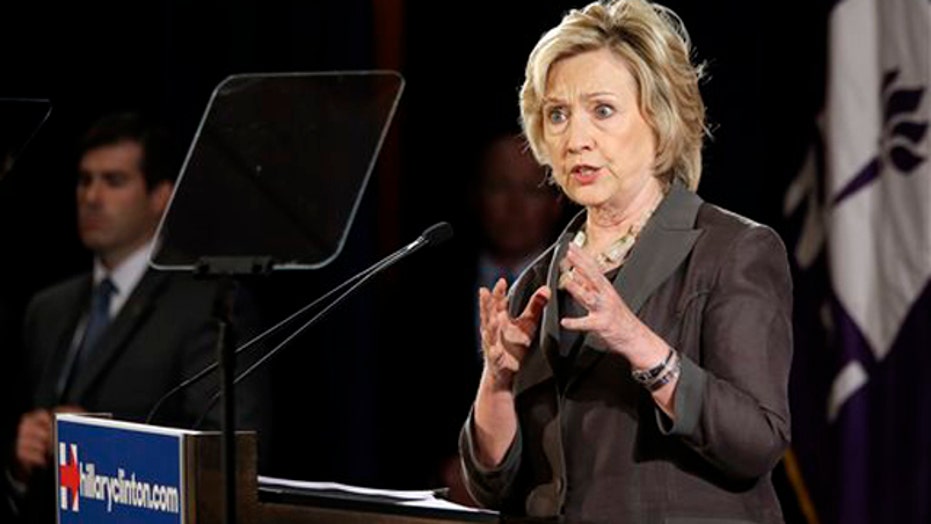 Hillary Clinton told reporters Saturday that she never sent or received classified information using her private e-mail server when she served as secretary of state, and that the facts on the issue "are pretty clear."

The Democratic presidential hopeful spoke briefly about the growing controversy surrounding her use of the server after a Democratic gathering at the Madison County Historical Complex in Iowa. Reporters raised the issue during a news conference that followed the event.

"I am confident that I never sent or received any information that was classified at the time it was sent and received," Clinton said. "What I think you're seeing here is a very typical kind of discussion, to some extent disagreement among various parts of the government, over what should or should not be publicly released."

Clinton reiterated that she wanted the emails in question to be made public as soon as possible, and expressed no opinion as to whether the Department of Justice should investigate.

"They can fight over it or argue over it. That's up to them. I can tell you what the facts are," she said.

"I think there's so much confusion around this that I understand why reporters and the public are asking questions, but the facts are pretty clear. I did not send nor receive anything that was classified at the time," she said.

The news conference came on the same day as the Clinton campaign announced that the former secretary of state will testify in October before the House committee investigating the killing of four Americans in a 2012 terror attack in Benghazi, Libya

Campaign spokesman Nick Merrill said Clinton will testify publicly before the House’s special Select Committee on Benghazi, after months of negotiations about the terms of her appearance.

A tentative date of Oct. 22 has been set.

Intelligence investigators told the Justice Department in a letter this week that secret government information may have been compromised in the unsecured system she used at her New York home.

“Hillary Clinton can't help but continue to mislead the American people," RNC spokesman Michael Short said in the statement. "The facts are clear: independent government investigators found that Hillary Clinton possessed information that was classified at the time on her secret email server and now the matter has been referred to the FBI.

"Hillary Clinton's reckless attempt to get around public records laws has jeopardized our national security.”

Clinton used the server and private email for official business that included some exchanges about the Sept. 11, 2012, attacks on a U.S. outpost in Benghazi.

The investigation into the deaths of the U.S. ambassador and the three others has grown into a political fight over Clinton's emails and private server and risks overshadowing her 2016 presidential campaign.

“Friday began with the printing of a story that was false,” Merrill said in a statement. “Entities from the highest levels of two branches of government have now made that clear. … We want to ensure that appropriate procedures are followed as these emails are reviewed while not unduly delaying the release of her emails.”

The inspector general of the U.S. intelligence community on Friday alerted the Justice Department to the potential compromise of classified information arising from Clinton's server.

The IG also sent a memo to members of Congress indicating that "potentially hundreds of classified emails" were among the 30,000 that Clinton had provided to the State Department -- a concern the office said it raised with FBI counterintelligence officials.

Though the referral to the Justice Department does not seek a criminal probe and does not specifically target Clinton, the latest steps by government investigators will further fuel the partisan furor surrounding the 55,000 pages of emails the State Department already has under review.

A spokesman for Democrats on the Benghazi committee told Fox News on Saturday that Gowdy's staff proposed to Clinton's attorney hearing dates in October and that on Friday the attorney accepted the Oct. 22 date.

The letter said none of the emails were marked "classified" at the time it was sent or received but that some should have been handled as such and sent on a secure computer network.

Clinton has said she used the private server at her home as a matter of convenience to limit her number of electronic devices.