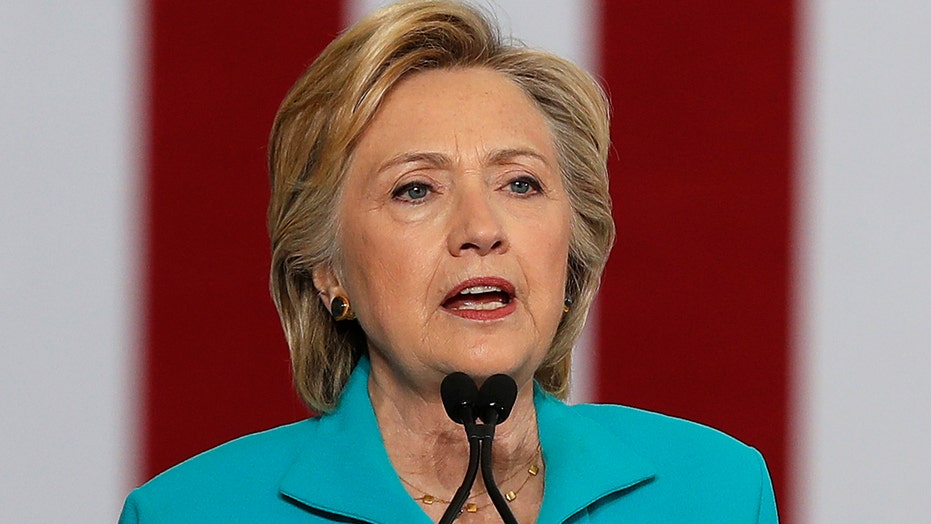 How Clinton is trying to divert attention from her health

The Hillary Clinton campaign on Wednesday released what it called a “comprehensive update” on the candidate’s medical information, describing the illness that took her off the trail this week as a mild and non-contagious bacterial pneumonia.

“She is recovering well with antibiotics and rest,” said Dr. Lisa Bardack, Clinton’s physician, who provided the information to the campaign.

The report follows Clinton having public coughing spells in recent weeks and stumbling on Sunday morning during a 9/11 memorial service in New York City.

Several hours after that incident, the campaign said that Clinton had been diagnosed Friday with pneumonia and was leaving the campaign trail for a few days to convalesce.

Bardack said she detected a “small” sign of pneumonia in the right middle-lobe of Clinton’s lung during the examination last week. And she described the pneumonia as “mild” and “non-contagious bacterial.”

The release Wednesday also shows Clinton takes thyroid medication and the blood-thinner Coumadin, which had been previously known.

Clinton also was recently prescribed Clarinex and Levaquin, which treats bacterial infections, to help get rid of the pneumonia.

Bardack, chairwoman of Internal Medicine at CareMount Medical in Mount Kisco, N.Y., diagnosed the pneumonia after taking a CT scan of Clinton’s lungs.

The campaign said Bardack also examined the 68-year-old Clinton on Wednesday and indicated she “continues to improve."

The report appeared to show all of Clinton’s other health indicators in the normal range, including her blood pressure, heart rate and cholesterol levels.

Bardack also found Clinton to be in “excellent mental condition,” according to the campaign’s release.

In December 2012, when Clinton was secretary of state, she fell, hit her head and sustained a concussion.

Aides said she fell because she had a stomach virus and became dizzy. About two weeks after the fall, doctors found a blood clot in Clinton’s head that was dissolved through medication. A July 2015 report confirmed the incident.

Clinton later said she needed about six months to fully recover from the problems related to the fall, including double vision.

That report and the one released Wednesday also shows Clinton suffers from allergies.

Her running-mate, Virginia Gov. Tim Kaine, released a letter Wednesday from his congressional doctor stating he is in “excellent medical health.”

Republican presidential nominee Donald Trump on Wednesday shared a summary of the results of his latest physical with television host and doctor Mehmet Oz. The show is set to air Thursday.

The details were provided during a taping. The Dr. Oz Show said in a press release that Trump "shared with Dr. Oz the results of his physical examination performed last week by Dr. Harold Bornstein," Trump's longtime doctor.

Clinton is expected to return to the campaign trail Thursday.

She did not attend fundraisers in California and a rally Wednesday in Nevada, instead turning to a reliable surrogate: her husband and former President Bill Clinton.

He hobnobbed with wealthy donors earlier this week at a pair of Beverly Hills fundraisers, including a $100,000-per couple dinner at the home of designer Diane Von Furstenberg. And he snapped selfies with fans during a surprise stop at a trendy coffee shop in Los Angeles before heading to swing state Nevada.

"I'm glad to have a chance to stand in for Hillary today," he told voters in Las Vegas on Wednesday. "She did it for me for a long time. It's about time I showed up and did it for her."

Having a former president on standby is an unprecedented luxury for a White House candidate. It's also a reminder to voters that, when it comes to the Clintons, the couple is a package deal, for better or worse.

Campaign aides quickly called Bill Clinton's chief of staff to see if he could step in for a few days. The timing wasn't ideal. His schedule was packed with interviews and other events in New York ahead of next week's last-ever meeting of the Clinton Global Initiative, a wing of the family's philanthropy.

But aides said he quickly agreed to clear his schedule and fly to California. He reportedly has been calling his wife multiple times a day to check on her health and report back on conversations with donors and other Democrats.

"She's married to the best surrogate in the world," said Jerry Crawford, an Iowa Democrat and longtime Clinton ally.

For all his political gifts, Bill Clinton has been an imperfect messenger on his wife's health this week.

He volunteered in an interview that she had had episodes like this before and on Wednesday said she had flu, not pneumonia. A spokesman said he misspoke and meant pneumonia, but such moments provide grist to conspiracy theorists who think Hillary Clinton is hiding health issues.

In Nevada, Clinton said, “I just talked to her, and she’s feeling great and getting back out there. And last time I checked, millions of people still get the flu.”

Hillary Clinton has an impressive stable of other surrogates on hand for the campaign's final stretch. President Barack Obama, whose favorability is on the rise in his final year in office, campaigned for her on Tuesday in Philadelphia. Vice President Joe Biden opened the week in North Carolina. Michelle Obama, the hugely popular first lady, will help rally voters in Virginia on Friday.