The Law Department of the city of Chicago this week tried to block a local TV station from airing video of a botched police raid in February 2019, in which city officers allegedly stormed the wrong house and handcuffed an innocent woman while she was naked – and while a group of male officers looked on, according to reports.

Chicago Mayor Lori Lightfoot claimed at a news conference Wednesday that she learned of the botched raid Tuesday – nearly two years after it occurred – and apologized to the woman, calling the incident "appalling."

"I watched that video in absolute horror," the mayor told reporters, according to the Chicago Sun Times.

Lightfoot also had strong words for her own legal team, denouncing them for keeping her in the dark about the incident.

"I made it very clear to the corporation counsel that I will not be blindsided by issues like this," Lightfoot said at the news conference.

After obtaining the video, Young appeared on WBBM and spoke about her ordeal as the station aired portions of the footage.

"I feel they didn’t want us to have this video because they knew how bad it was," Young said. "They knew they had done something wrong. They knew that the way they treated me was not right."

The city’s Law Department tried to prevent WBBM from airing the video just hours before the broadcast by filing an emergency motion in federal court, the station reported.

Lightfoot was not pleased by the Law Department’s action, according to the Sun Times. 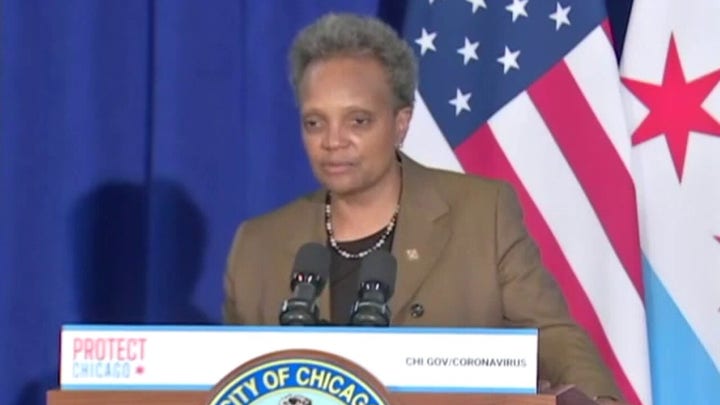 "Filing a motion against a media outlet to prevent something from being published is something that should rarely, if ever, happen," the mayor said. "And had I been advised that this was in the works, I would have stopped it in its tracks. This is not how we operate. Period."

Nine police body cameras were in operation when police entered Young’s home Feb. 21, 2019, according to WBBM. Young was changing out of her clothes in her bedroom after returning home from work as a social worker, the station reported.

Police broke down her door with a battering ram and entered with guns drawn, according to the station.

WBBM reported that police and court records suggest that an informant gave police the wrong address for a 23-year-old felon who was under investigation. The suspect lived next door and could have been easily located because he was wearing an electronic monitoring device from a previous arrest, according to the station.

The botched raid was just the latest in a long string of black eyes for the Chicago Police Department that have included the departure of former Superintendent Eddie Johnson, who in October 2019 was found asleep in his car after "a couple of drinks with dinner," and who two months ago faced allegations of sexual assault. Johnson retired in December 2019.