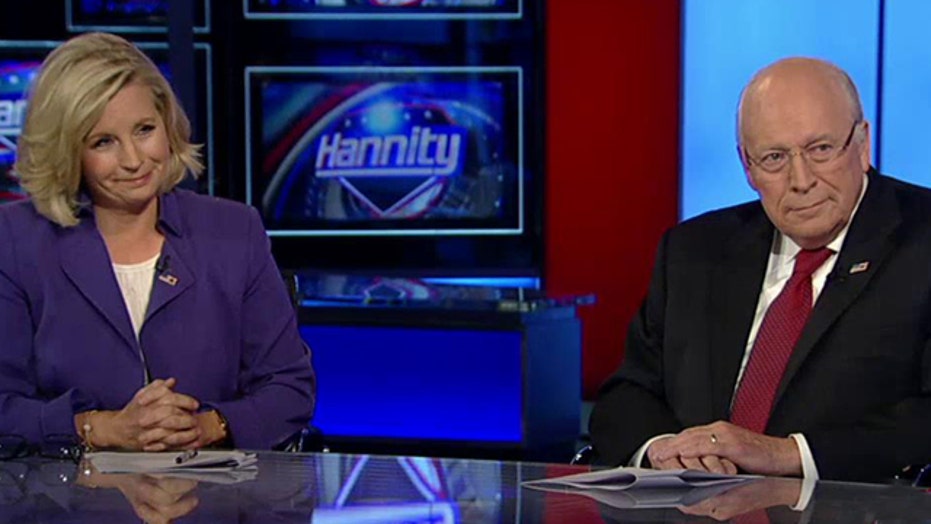 Exclusive: Dick and Liz Cheney on fight against ISIS

Former Vice President Dick Cheney said he was “stunned” that President Obama appeared to compare the unrest in the Middle East to the unrest in Ferguson, Mo., during his United Nations speech.

Cheney, speaking with Fox News on Wednesday, said it’s “outrageous” to suggest a “moral equivalence” between the two situations.

“I was stunned. I mean, in one case, you've got a police officer involved in a shooting. There may be questions about it. They'll be sorted out through the legal process. There's no comparison to that with what ISIS is doing to thousands of people throughout the Middle East, with bloody beheadings of anybody they come in contact with,” he said.

The president invoked the demonstrations in Missouri toward the end of his U.N. General Assembly speech in which he urged international partners to join in the fight against the Islamic State and other terror groups.

Obama acknowledged that some countries would question the U.S. call to action.

“I realize that America’s critics will be quick to point out that at times we too have failed to live up to our ideals; that America has plenty of problems within its own borders. This is true. In a summer marked by instability in the Middle East and Eastern Europe, I know the world also took notice of the small American city of Ferguson, Missouri -- where a young man was killed, and a community was divided,” Obama said. “So, yes, we have our own racial and ethnic tensions. …

“But we welcome the scrutiny of the world -- because what you see in America is a country that has steadily worked to address our problems,” he said.

The Obama administration – particularly the Justice Department – has paid close attention to the unrest in Ferguson after a police officer fatally shot 18-year-old Michael Brown. The department is conducting a civil rights probe into the killing.

Cheney, speaking with Fox News, also reiterated concerns that the U.S. may be pursuing “pinprick attacks” with the air campaign against the Islamic State.

“You give the enemy time to adjust, to go underground, to take care of protecting themselves from those attacks, and they're less effective when you telegraph what you're going to do,” Cheney said.

The Obama administration nevertheless has received support from many congressional leaders since expanding the air campaign into Syria on Monday.

The U.S. and Arab allies launched another round of strikes Wednesday on oil refineries in Syria, which the militants use in part to fund their multi-million dollar operation.