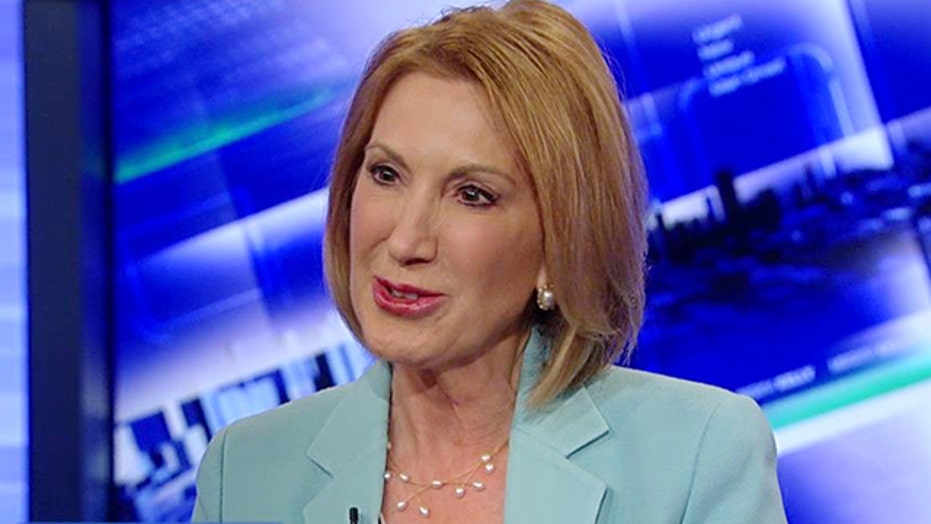 Exclusive: Carly Fiorina on running for president in 2016

The GOP presidential field grew by two Monday as retired neurosurgeon Ben Carson and former technology executive Carly Fiorina both announced they are running for president.

The two new candidates enter a quickly expanding GOP field as Democrats get off to a relatively slow start, with another Republican -- former Arkansas Gov. Mike Huckabee -- set to make his announcement on Tuesday. Together, Carson and Fiorina add to the diversity on the Republican side; Fiorina is the first, and possibly only, female Republican in the race, while Carson is the first black candidate of either party to enter the campaign.

Carson formally launched his campaign in his hometown of Detroit on Monday.

"I'm Ben Carson, and I'm a candidate for president of the United States," Carson said, after being introduced with a series of musical acts.

In his soft-spoken tone, Carson blasted big government -- and the Affordable Care Act -- while also acknowledging his history of controversial comments. He described his candor, however, as an asset.

Carson tipped his hand a day earlier, also telling Ohio's WKRC-TV that he was announcing his campaign for the White House.

The top of the Fiorina site carries the slogan: "New Possibilities. Real Leadership."

On Fox News' "The Kelly File" Monday night, Fiorina told host Megyn Kelly her best qualification for leadership was "knowing what leadership is. It's not about position, power or title...what leadership takes is character."

The two candidates join senators Marco Rubio, Rand Paul, and Ted Cruz as members of a GOP field that is shaping up to be younger and more diverse than in recent years. Cruz and Rubio are both Cuban-Americans. The field reflects a growing diversity in professional backgrounds as well, with two doctors and a businesswoman now in the mix.

By contrast, the field of declared and potential Democratic candidates includes mostly white, current and former government officials. However, the front-runner, Hillary Clinton, would be the first female U.S. president if elected -- something that is a centerpiece of her political brand.

Fiorina has been blunt in recent weeks in saying that her entry into the race minimizes the effectiveness of Clinton playing the "gender card." Still, Clinton unquestionably leads the Democratic primary race, which currently consists of just two candidates. By contrast, recent polling shows Fiorina at the very back of the Republican primary field. A Fox News poll released last week showed Carson with 6 percent, and Rubio leading with 13 percent.

Fiorina could still gain ground on the heels of her announcement. And in a video accompanying the announcement, she again took aim at Clinton's candidacy.

It begins with her watching the former secretary of state's recent announcement video. "Our founders never intended us to have a professional political class," Fiorina says after turning away from a television on which Clinton declared her own candidacy. "We know the only way to reimagine our government is to reimagine who is leading it."

Fiorina, 60, has long been a fierce critic of Clinton. Fiorina's announcement comes one day before the release of her book "Rising to the Challenge: My Leadership Journey."

Fiorina also was planning to host an interactive town hall Monday afternoon via the video streaming app Periscope before beginning a swing through early primary states, including Iowa, New Hampshire, and South Carolina.

Democrats made clear, though, that they would use her private-sector record against her.

"If Carly Fiorina believes she is qualified to be president, that just goes to show how out of touch the Republican Party is with what everyday Americans need," Democratic National Committee spokeswoman Holly Shulman said in a statement. "Fiorina's short time at Hewlett-Packard is all we need to know -- laying off 30,000 employees, while being rewarded with a multimillion dollar bonus. While she is attempting to run on her business record, it consists of mass layoffs, tumbling stock prices, and a failed merger. If this is how Fiorina ran her business, just imagine what she would do to the country."

Meanwhile, a campaign source told Fox News that Carson had to cancel a scheduled appearance in West Des Moines, Iowa later Monday so he could travel to Dallas "to say goodbye" to his ailing mother, who is suffering from Alzheimer's disease. A senior Carson aide also told Fox News that the candidate had canceled a planned appearance on ABC's "Good Morning America" Monday due to his trip to Dallas, and other interview cancelations were expected to follow.

Carson, who has never run for public office, is expected to be the only high-profile black GOP presidential candidate trying to parlay his success as an author and speaker into a competitive campaign against more established politicians.

Fiorina, meanwhile, has a resume more likely to draw support among the Republican establishment. The former chief executive of Hewlett-Packard Co., she became a prominent figure in Republican politics in 2010, when she ran for Senate in California and lost to incumbent Sen. Barbara Boxer by 10 points.

Carson earned national acclaim during 29 years leading the pediatric neurosurgery unit of Johns Hopkins Children's Center in Baltimore, where he still lives. He directed the first surgery to separate twins connected at the back of the head. His career was notable enough to inspire the 2009 movie, "Gifted Hands," with actor Cuba Gooding Jr. depicting Carson.

On Monday, Carson recalled his difficult upbringing being raised by a single mother in a crime-ridden neighborhood. Citing his personal story, he blasted those who accuse him of wanting to scrap the social safety net as peddling a "blatant lie." Rather, Carson said he wants to end "cradle-to-grave" policies for those who don't need them.

The 63-year-old has established a strong base of vocal support among tea party-backers, some of whom launched an effort to push Carson into the race before he set up an exploratory committee earlier this year.

Yet he has stumbled at times in the glare of national politics. He has suggested the Affordable Care Act is the worst thing since slavery, compared present-day America to Nazi Germany, and called problems at the nation's Veterans Affairs hospitals "a gift from God" because they revealed holes in country's effort to care for former members of the military.