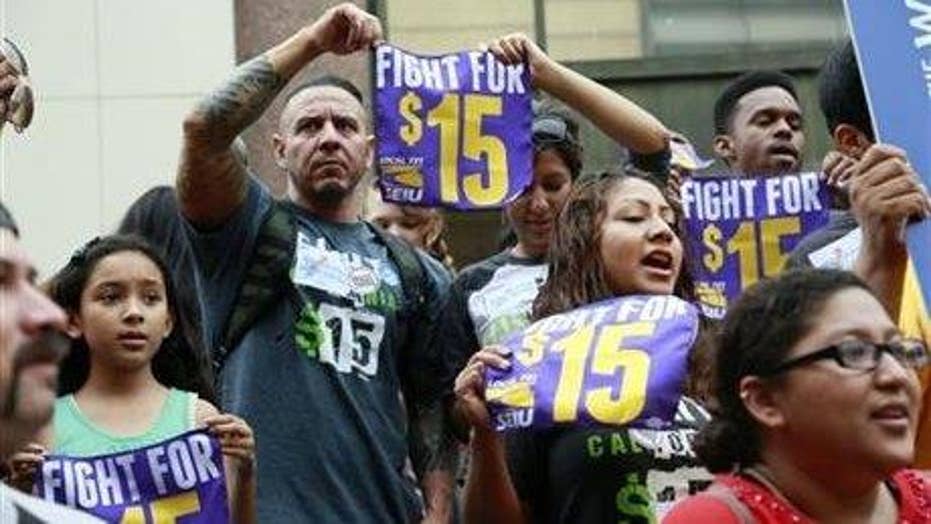 SACRAMENTO, Calif. – Gov. Jerry Brown joined fellow Democrats and labor leaders Monday in touting California's proposal to gradually lift the minimum wage to $15 an hour as an answer to the growing challenge of income disparity.

"It's a matter of economic justice, it makes sense, and will help our entire state do much better for its citizens," the Democratic governor said.

Under the proposal, the state's minimum wage would reach $15 an hour by January 2022, rising in increments starting with a boost from $10 to $10.50 on Jan 1, 2017. Businesses with 25 or fewer employees would have an extra year to comply, and the governor could delay annual increases in times of budgetary or economic downturns.

Wages would increase to keep up with inflation after 2023.

"In the wealthiest state in the wealthiest nation on Earth, no one, no one who works fulltime should be forced to live in poverty," de Leon said. "Wages have stagnated for decades while consumer costs, corporate profits and executive bonuses have skyrocketed."

Lawmakers in the Assembly and Senate could send the bill to Brown's desk as early as Thursday, said Sen. Mark Leno, D-San Francisco. They will amend the new version onto Leno's SB3, a less-sweeping minimum wage bill that cleared the Senate last year but stalled in an Assembly committee.

The bill needs a majority of votes to pass the Legislature, and Democrats control both chambers.

The National Federation of Independent Business warned against adding to what it called an already onerous burden on small businesses. The group's California arm said a 50 percent boost in the minimum wage would further harm the state's already poor business reputation.

Assembly Minority Leader Chad Mayes, R-Yucca Valley, said in a statement that the move could actually harm the communities it is designed to assist by adding to the overall cost of living. That may make "the California dream even less attainable for our middle class and low-income families," he said.

Brown said he thinks business will have little choice and must eventually accept the proposed legislation, if only because it is more conservative than alternatives pushed by labor organizations.

Legislative approval of a minimum-wage package would avoid taking the issue to the ballot. One union-backed initiative has already qualified for the ballot, and a second, competing measure is also trying to qualify.

At $10 an hour, California already has one of the highest minimum wages in the nation along with Massachusetts. Only Washington, D.C., at $10.50 per hour is higher. The hike to $15 in California would make it the highest statewide wage in the nation by far, though raises are in the works in other states that might change by the time the plateau is reached in 2022.