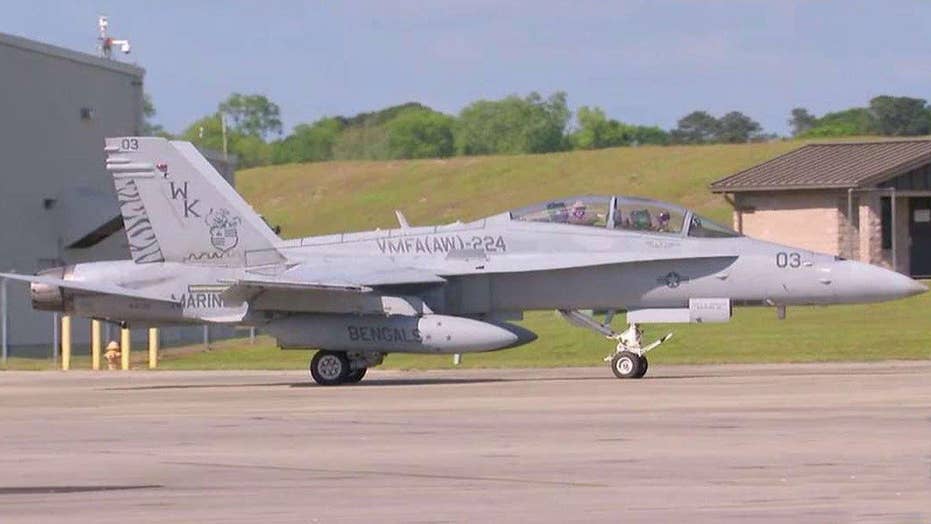 EXCLUSIVE: Since 1775, the U.S. Marine Corps has prided itself on being “The Few" and "The Proud." But while the Corps takes pride in doing more with less, senior Marine officers are warning that the Corps' aviation service is being stretched to the breaking point.

Today, the vast majority of Marine Corps aircraft can’t fly. The reasons behind the grounding of these aircraft include the toll of long wars in Afghanistan and Iraq, the fight against ISIS and budget cuts precluding the purchase of the parts needed to fix an aging fleet, according to dozens of Marines interviewed by Fox News at two air stations in the Carolinas this week.

Out of 276 F/A-18 Hornet strike fighters in the Marine Corps inventory, only about 30% are ready to fly, according to statistics provided by the Corps. Similarly, only 42 of 147 heavy-lift CH-53E Super Stallion helicopters are airworthy.

U.S. military spending has dropped from $691 billion in 2010 to $560 billion in 2015. The cuts came just as the planes were returning from 15 years of war, suffering from overuse and extreme wear and tear. Many highly trained mechanics in the aviation depots left for jobs in the private sector.

“Quite honestly, it is coming on the backs of our young Marines,” Lt. Col. Matthew “Pablo” Brown, commanding officer of VMFA(AW)-533, a Hornet squadron based at Marine Corps Air Station Beaufort in South Carolina. “They can do it, and they are doing it but it is certainly not easy.”

Brown's squadron is due to deploy to the Middle East in the coming days.

To get one Hornet flying again, Marines at Beaufort stripped a landing gear door off a mothballed museum jet. The door, found on the flight deck of the World War II-era USS Yorktown, was last manufactured over a decade ago.

“Imagine taking a 1995 Cadillac and trying to make it a Ferrari,” Sgt. Argentry Uebelhoer said days before embarking on his third deployment. “You're trying to make it faster, more efficient, but it's still an old airframe … [and] the aircraft is constantly breaking.”

Maintaining the high-performance Hornets is a challenge with 30,000 fewer Marines, part of a downsizing that has been ongoing since 2010.

“We don't have enough of them to do the added work efficiently. We are making it a lot harder on the young marines who are fixing our aircraft,” said Maj. Michael Malone of Marine Aviation Logistics Squadron 31.

Sometimes it takes the Marines 18 months to get parts for early model F-18 jets whose production was halted in 2001.

“We are an operational squadron. We are supposed to be flying jets, not building them,” said Lt. Col. Harry Thomas, Commanding Officer of VMFA-312, a Marine Corps F/A-18 squadron based at Beaufort.

The cuts include those made by the Obama administration as well as the sequestration cutbacks agreed to by Congress.

Asked about the Marines’ concerns on Friday, White House Press Secretary Josh Earnest put the onus on Congress to right the problem – and said Republicans have blocked spending reforms that would have helped military readiness. He said Republicans “championed” the sequester cuts.

Lt. Col Thomas, call sign “Crash,” deployed to the Pacific with 10 jets last year. Only seven made it. A fuel leak caused his F/A-18 to catch fire in Guam. Instead of ejecting, he landed safely, saving taxpayers $29 million.

Thomas has deployed eight times in all, including six to Iraq and Afghanistan. Right now only two of his 14 Hornets can fly. His Marines deploy in three months.

“We are supposed to be doing the type of maintenance like you would take your car to Jiffy Lube for replacing fluids, doing minor inspections, changing tires, things of that nature, not building airplanes from the ground up,” he added.

“This last 30 days our average flight time per pilot was just over 4 hours,” said Thomas.

Ten years ago, Marine Corps pilots averaged between 25 and 30 hours in the air each month, according to one pilot. “This is the worst I’ve seen it,” he added. Another pilot who asked to remain nameless told Fox News that Chinese and Russian pilots fly more hours each month than Marine Corps pilots.

Marine Corps F/A-18 Hornets are supposed to have a shelf life of 6,000 hours, but they are being refurbished to extend the life to 8,000. There is talk that some aircraft might be pushed to 10,000 hours while the Marine Corps waits for the 5th-generation Joint Strike Fighter, which is slated to replace the F-18, but has been plagued by cost overruns.

“Our aviation readiness is really my No. 1 concern,” Marine Corps Commandant Gen. Robert Neller told Congress last month. “We don’t have enough airplanes that we would call ‘ready basic aircraft."

Maj. Matt Gruba, executive officer of HMH-461, a Super Stallion squadron at New River took Fox News reporters inside one of the large helicopters, which has sent thousands of fully loaded Marines into combat over the past three decades.

Inside, hundreds of small wires cover every surface of the helicopter except the hard non-skid deck. It’s up to the Marine maintainers to inspect each one. One failure could be catastrophic, as happened in 2014 when a Navy MH-53E Sea Dragon crashed off the coast of Virginia after a fire engulfed the aircraft due to faulty fuel lines.

"It would be easy to miss some small minute detail, some small amount of wear [which] could potentially, eventually cause a fire,” Gruba said

Lt. Gen. Jon M. "Dog" Davis is the Marine Corps' deputy commandant for aviation, tasked with getting his aircraft back in the air.

Davis ordered the Corps to refurbish all of the old CH-53E helicopters to their pre-war condition, including fixing the chafing wires and jerryrigged fuel lines that were repaired in theater.

"The biggest thing is right now after 15 years of hard service, of hard fighting and deploying around the world, is we don't have enough airplanes on the flight line,” Davis said.

The cuts have not sat well within the military leadership. Former Defense Secretary Robert Gates told Fox News’ Bret Baier in a recent interview that he felt betrayed when told to cut billions from the budget after having already done so.

“I guess I’d have to say I felt double-crossed. After all those years in Washington, I was naïve,” he said.

“If one or more possible unforeseen contingencies happen, then the United States Army currently risks not having ready forces available to provide flexible options to our national leadership. ... And most importantly, we risk incurring significantly increased U.S. casualties,” Milley testified last week on Capitol Hill.